The Hubble Space Telescope has made some remarkable discoveries in its 30 years in space, including a flapping “bat shadow,” summertime on Saturn and that the first stars and galaxies formed earlier than previously thought.

Now, it’s discovered evidence of a supernova 2,400 light-years away that looks like an orange ribbon.

The image is part of the Cygnus supernova blast wave, which is found in “the northern constellation of Cygnus (the Swan), where it covers an area 36 times larger than the full Moon,” NASA said in a release. 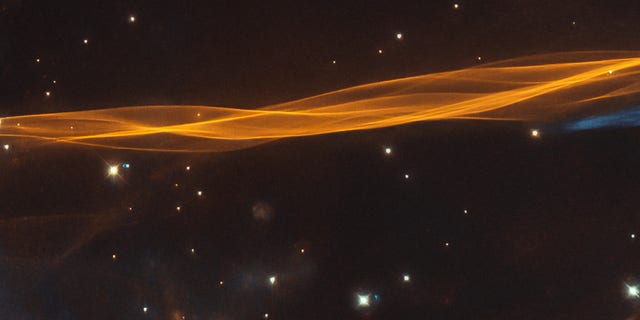 While appearing as a delicate and light veil draped across the sky, this image from the NASA/ESA Hubble Space Telescope actually depicts a small section of the Cygnus supernova blast wave, located around 2400 light-years away. (ESA/Hubble &amp; NASA, W. Blair; acknowledgment: Leo Shatz)

“The original supernova explosion blasted apart a dying star about 20 times more massive than our Sun between 10,000 and 20,000 years ago,” NASA added. “Since then, the remnant has expanded 60 light-years from its center. The shockwave marks the outer edge of the supernova remnant and continues to expand at around 220 miles per second.”

Hubble, which was launched into low-Earth orbit in April 1990, celebrated its 30th anniversary in space earlier this year.

Launched on the back of the space shuttle Discovery in 1990, the orbiting telescope, which is about the size of a school bus, has shown the birth of stars and even the creation of black holes.

NASA notes that it has also captured Jupiter’s Great Red Spot shrinking over time and made discoveries such as planetary moons and icy objects beyond Pluto.

Its eventual successor, the James Webb Space Telescope, described by NASA as the most powerful and complex space telescope ever built, is scheduled to launch on March 30, 2021. However, work on the telescope was paused due to the coronavirus pandemic.