Hurricane Laura barrels toward the US 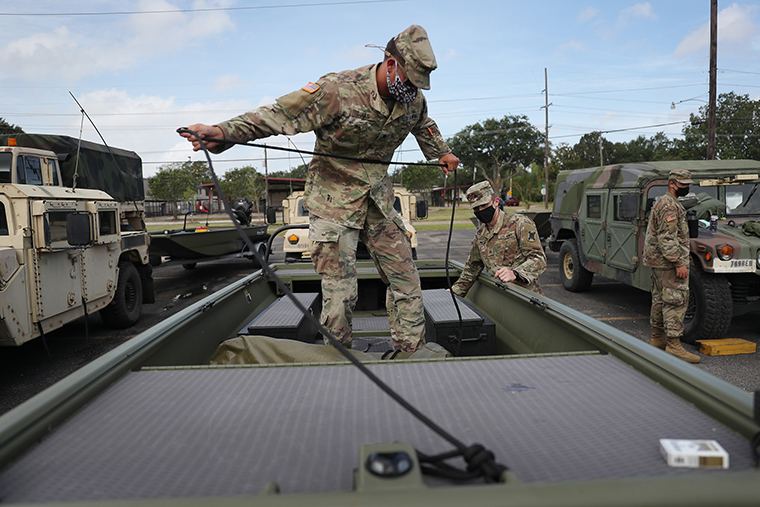 A member of the Louisiana National Guard prepares a boat for the arrival of Hurricane Laura on August 26, 2020 in Lake Charles, Louisiana. Joe Raedle/Getty Images

The full Louisiana National Guard has been activated ahead of Hurricane Laura’s landfall, Gov. John Bel Edwards announced at a press conference today. He said the last time the state had activated the full guard was for Hurricane Issac in 2012.

“We need everyone in southwest Louisiana paying close attention to this storm,“ Gov. Edwards said.  “People need to heed the warnings they have been given and evacuate” he added. He called the expected storm surge un-survivable in some Parishes in the path of the storm.

“We do believe that there will be extensive search and rescue after this storm,” Edwards said, thus part of the reason for activation of the full guard.

The governor said that more than 3,000 members of the guard are currently deployed, with that number to increase this afternoon. In addition to the personnel, 19 aircraft, 920,000 liters of water and more than half a million meals have been pre-deployed, Edwards added.

About 2,000 hotel rooms had been secured this evening to help shelter people as a result of the storm and to also help with social distancing, Edwards said.

All commercial traffic along I-10 is being detoured north from I-10 to I-20, Shawn Wilson commissioner of the Louisiana Department of Transportation said at a press conference.