The global economy is “coming back” the International Monetary Fund said on Tuesday, but warned that the road to recovery from the COVID-19 pandemic will likely be long and uncertain with “uneven recoveries” in emerging and developing economies significantly worsening the prospects for redressing income inequality within and between nations.

In its latest World Economic Outlook, the IMF revised its forecast for global growth to negative 4.4 percent this year –  a less severe contraction than the negative 5.2 percent it had forecast in June, but still on track for the worst performance since the Great Depression.

“We are projecting a somewhat less severe though still deep recession in 2020, relative to our June forecast,” said chief economist Gita Gopinath in a foreword to the October revision of the World Economic Outlook.  “The revision is driven by second-quarter GDP outturns in large advanced economies, which were not as negative as we had projected,” she added, citing China’s stronger-than-expected return to growth as a key driver.

But a lack of fiscal space and ballooning debt has left less wealthy countries – where most of the world’s people live – in economic shambles.

“The poor are getting poorer with over 90 million people expected to fall into extreme poverty just this year,”  said Gopinath during a virtual presentation on Tuesday. “Policies for the next stage of the crisis must see lasting improvements and create a prosperous future for all.”

Inequality within countries is growing as well, with low-skilled workers, women and young people being hit harder than others.

Preventing the divergence will require ending the health crisis, said Gopinath, and getting countries to work together to ensure the rapid development of coronavirus treatments and vaccines.

The IMF upgraded its economic outlook for the United States due to stronger than expected performance in the second and third quarters.

“In the second quarter the recovery in the US came sooner than expected [and] quarter three has been strong as well,” despite a resurge in coronavirus cases, Gopinath said, adding that the projection still remains in negative territory of minus 4.3 percent. 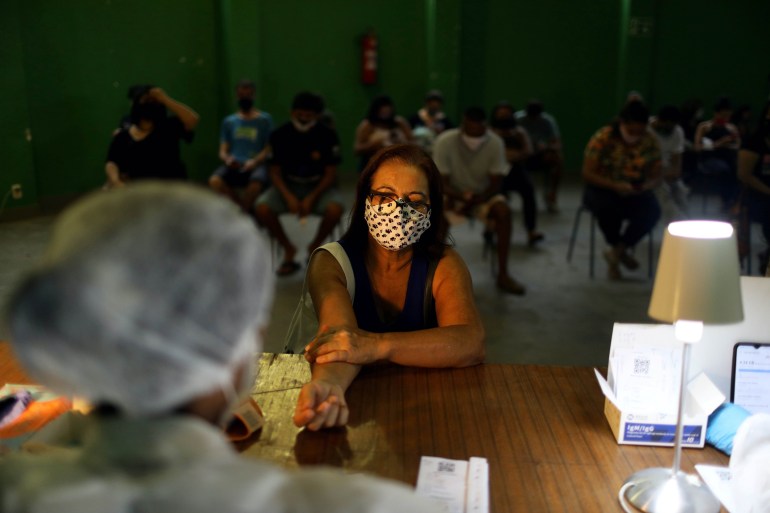 A nurse takes a blood sample from a woman for a coronavirus test at the Santa Marta slum in Rio de Janeiro, Brazil [File: Pilar Olivares/Reuters]But even a partial recovery in the US economy has positive spillover to other parts of the world. Action taken by the US Central Bank, the Federal Reserve, early in the pandemic has helped stabilise the global market, she said.

In sub-Saharan Africa, 20 million people are projected to fall into extreme poverty this year.

These countries simply do not have the fiscal space and policies to deal with a crisis of such magnitude.

India, where the hit on the economy has been large and broad based, is seeing a significant growth downgrade of minus 10.3 percent.

“There’s been some efforts to improve medium-term prospects with some progress on labour reform bills,” Malhar Nabar, Division Chief at IMF Research, said during the virtual briefing.

Extraordinary fiscal and monetary support is critical for least developed, developing and emerging economies in Asia, Africa, Latin America and the Middle East that rely heavily on tourism and oil exports, said the IMF officials.

Latin America and the Middle East and North Africa (MENA) are the worst-affected regions, respectively. 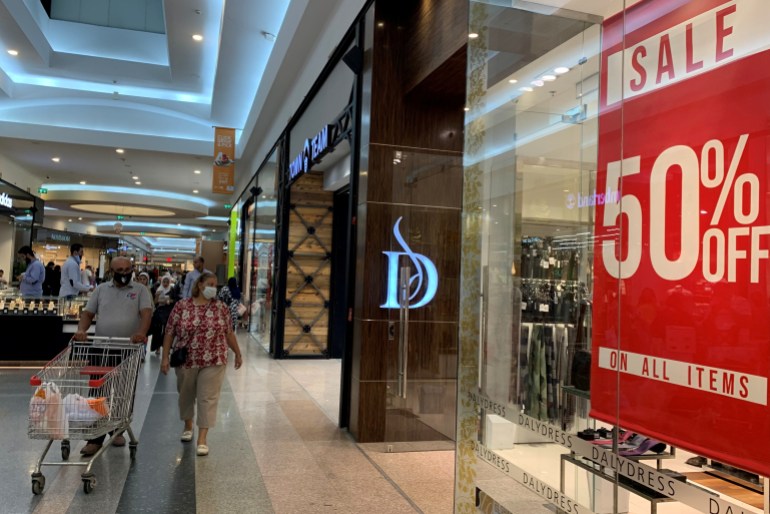 Shoppers wearing protective face masks walk near a sale sign in a shop window inside a Carrefour hypermarket in the Cairo suburb of Maadi, Egypt [File: Amr Abdallah Dalsh/Reuters]“You have the oil exporters who are being hit by the fact that you have these oil production cuts. Then you have countries that are oil importers that rely on tourism and remittances and they are getting hit, too. What we learned from international experience is that we will require much smarter and localised lockdowns,” Gopinath said.

There is no shortage of countries in MENA who are experiencing multi-pronged collapses in sectors and industries.

“It is a big challenge because of the impact of the pandemic and the hit on tourism for such countries like Egypt,” Gian Maria Milesi-Ferretti, the IMF’s Deputy Director in the Research Department, said.

And in Latin America, which prior to the pandemic had the world’s highest levels of inequality, crises have piled on top of one another. The IMF says fiscal support will serve as life support. This is concerning as hard-hit Brazil recently announced that it will be cutting its pandemic relief aid.

“Basically, we are seeing a less deep recession this year than we were anticipating, and that is also because of very substantial and fiscal support and monetary support, which are absolutely essential to preserving lives and livelihoods,” said Milesi-Ferretti.