This mountain outpost, at 10,152 feet the highest city in North America, has ridden many a boom and bust.

By 1880, a silver mining bonanza had turned Leadville into the biggest settlement between St. Louis and San Francisco.

A century later, it went belly-up when collapsing prices for the metal molybdenum claimed thousands of mining jobs.

Before the coronavirus outbreak, the town of 2,760 was making a comeback as a tourist destination, its refurbished Victorian hotel buildings, the Silver Dollar Saloon and an elaborate mining museum framed by snowcapped peaks.

The one constant over the years — not counting the bitter winters and the altitude that leaves visitors gasping — has been the United States Postal Service.

Leadville has no car dealership, no Walmart, no department store and no dependable internet service.

“We’re a small, rural mountain town, so the post office, as you can imagine, is our lifeline,” said Leadville Mayor Greg Labbe.

For decades before it was City Hall, the stately brick building where Labbe works was the post office, with a small attic window where, according to tour guides, the postmaster spied on mail carriers making their rounds. 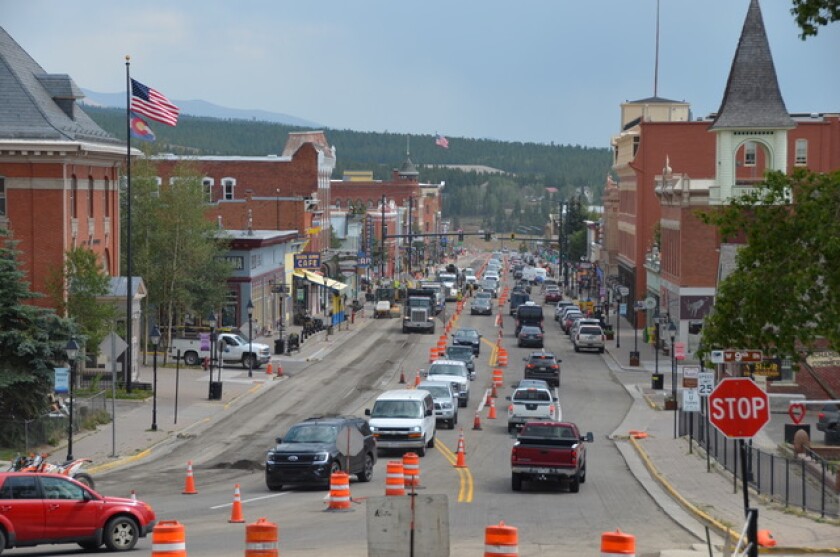 Traffic backs up during construction in Leadville, Colo., recently from the city’s latest boom.

“It’s a magnificent building, they spared no expense because the Postal Service considered us a first-class city, which they still do,” he said. “That means we continue to get household delivery, and a lot of cities this small don’t.”

Today, the post office is a one-story brick structure built in 1966, with then-President Johnson’s name on a plaque out front.

Kat Peterson arrived the other day to check her post office box. On disability in her 50s, she lives in low-income housing and has no car. Since Shopko, a general retailer, closed two years ago, she has mail-ordered practically all of her purchases.

“We’re very mail dependent, all the way up here,” she said. “Even my dog counts on the U.S. mail.”

For Katie Duggin, who works nearby as a probation officer, post office business was beside the point. It was her lunch hour, and the front walk was a fine place to catch up with friends.

“If we didn’t have a post office here, we’d be driving over passes all the time,” she said. “Sometimes that’s impossible, because they close the roads when there’s too much snow.”

Patrons appreciate the country post office for its personal service, and the lengths that its 14 staff and contractors are willing to go.

As Peterson departed, pizza parlor owner Tim Koch hurried to the counter, having realized that he’d mailed eight envelopes without postage. A clerk dug through bulging mail bags and found them. 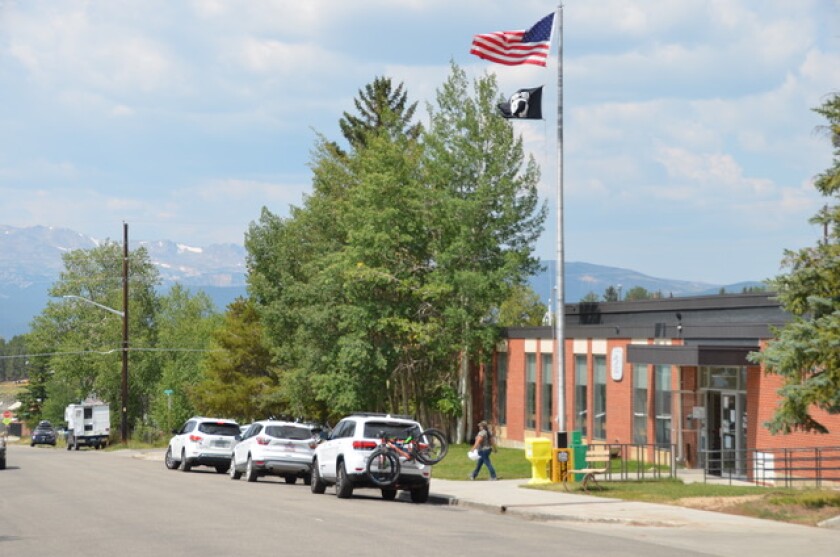 Snowy peaks, some exceeding 14,000 feet, loom above the post office in Leadville, Colo. One topic hardly mentioned at the post office was politics, even though the Postal Service has become the center of partisan controversy in the run-up to the November presidential election.

With record numbers of people expected to vote by mail because of the pandemic, President Trump has claimed — without evidence — that Democrats will send in loads of fake ballots.

Democrats accuse his administration of trying to sabotage the election by suddenly reducing overtime hours and eliminating hundreds of mail-sorting machines.

In March, before the controversy, a national survey by the Pew Research Center found that 91% of respondents, no matter which political party they favored, had a favorable impression of the Postal Service, ranking it higher than any other federal agency.

In Lake County — where Leadville is the only city — Trump received 55% of the vote in the 2016 election compared with 40% for Hillary Clinton.

But the local postmaster, Greg Sandoval, who has managed ZIP Code 80461 since 2013, goes to great lengths to make sure the post office remains neutral territory.

The weekly Leadville Herald Democrat, print circulation 2,100, reported that two years ago he left town for training on the Hatch Act, which forbids civil servants from engaging in political activity on the job.

When he returned, he asked patrons not to wear campaign pins into the post office and requested that cars in the parking lot display no more than one campaign bumper sticker, the newspaper reported.

Asked to comment for this story, Sandoval said that postmasters had recently received a memo requiring them to apply for permission to talk with reporters. His application was denied.

“We don’t want to put our employees at risk of saying something that would cause them problems,” said James Boxrud, a Postal Service strategic communications specialist in Denver.

The most that customers would say about the national controversy was that shipping times seemed to have slowed in recent months.

“You can make any excuse you want, half-ass is half-ass,” said Fred Allen, a retired miner, who arrived with his wife to check their slot, P.O. Box 1136. Allen, 69, has had the address since the 1970s, when he began work for legendary mines such as Climax, Black Cloud and Henderson that once employed thousands but have since shut down or dramatically scaled back operations.

“I’d go down 300 feet in a bosun’s chair, poke some holes, fill them with dynamite and blast rocks as big as this post office,” he said.

The post office has long been a common point of reference here.

In the 1870s, when Leadville was still an unnamed mining community, carriers delivered all the mail from Denver every couple weeks to “a cigar box in Charlie Mater’s store,” Marshall Conant Graff wrote in 1920 in his master’s degree thesis at the University of Wisconsin.

When frustrated business leaders petitioned the federal government for a post office, they needed to call their community something. A school teacher persuaded the group to name it Leadville for the area’s lead ore deposits.

Lately, or at least until the pandemic, the city was on a roll again, with a new hospital and elementary school under construction as new arrivals sought an alternative to tony ski resort towns such as Aspen and Breckenridge.

“Leadville is the last affordable mountain community in this area,” said Marcia Martinek, a former editor of the Herald Democrat. “Our big thing is we never want to be Breckenridge, an old mining area turned to condos.”

As the economy picked up, so did the mail. The online news site Leadville Today reported that the number of packages delivered during the December holiday rush almost doubled over the last five years, to more than 25,000.

The pandemic has hurt the Postal Service nationwide because even as package proceeds have grown, businesses have slashed the bulk advertisements and solicitations that usually provide the most revenues.

As for the November election, Postmaster General Louis DeJoy, a Republican fundraiser appointed in May, testified before a House committee last week that the Postal Service could handle any surge in traffic from voting, but asked voters to request and return mail-in ballots early.

Colorado switched to mail-in ballots for elections statewide in 2013, having offered the option for 20 years. Just to be sure, many Leadville voters return ballots at a drop box in the county courthouse.

Colorado Secretary of State Jena Griswold, a Democrat who worked for President Obama’s 2012 reelection campaign, sees Trump’s attack on the Postal Service as an attempt to tilt the election his way.

“He believes that mail-in ballots will be used predominantly by Democrats,” she said. “In the last two out of three elections in Colorado, more Republicans used mail-in ballots than Democrats.”

Griswold, 35, grew up 90 miles northeast of Leadville in a remote Rocky Mountain cabin with an outhouse. A neighbor used to plow the steep dirt road, digging out a cluster of mailboxes from the snow, as Griswold still does for her mother.

“One of the things that folks from rural America share is the value of the post office, because it really keeps families together,” she said. “Whether it’s medicine or packages or your election ballot — your voice in our democracy — it’s delivered by the post office.”

In Leadville, the post office also plays a special role for hikers, mountain bikers and horse riders on the 576-mile Colorado Trail, which runs between Denver and Durango, Colo.

They rely on it as a depot, picking up food and supplies they’ve mailed ahead, or receiving crucial repair parts sent by family and friends. 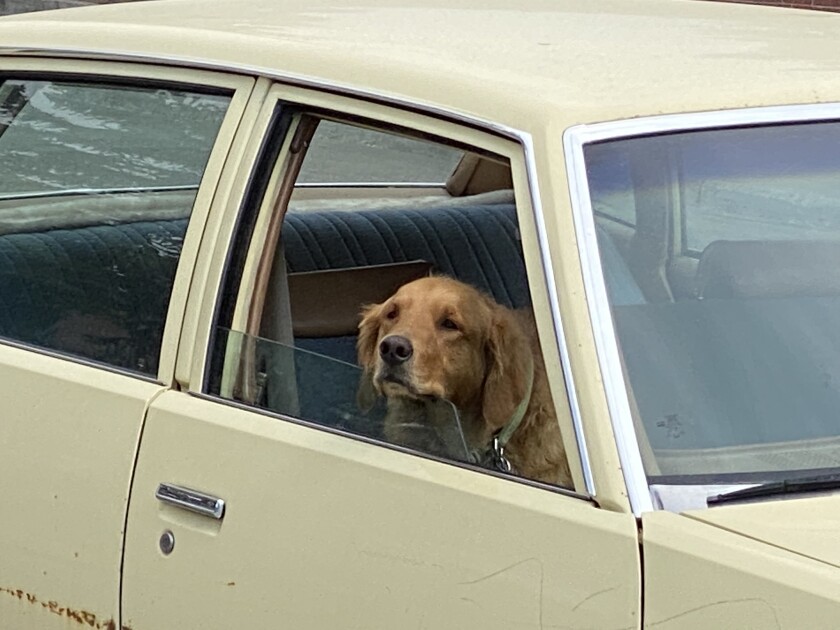 Lilly awaits her owner, Norman Winings, in a 1979 Pontiac Leman outside the Leadville, Colo., post office.

Cameron Millard, who lived across the street from the post office for years before moving outside the city limits to escape what he considered hubbub, recalled waves of exhausted cyclists and ultramarathon runners sprawled on its front lawn each summer. Sometimes he offered them a spot in his yard to camp.

But this summer the coronavirus, known to have infected 80 people in Lake County, has caused cancellation of most events.

The Father Dyer Postal Route Ski Race is no exception. The grueling contest retraces the route of John Lewis Dyer, a Minnesota minister who preached in Rocky Mountain mining towns during the late 1800s.

To make ends meet, as he skied and snowshoed across the 13,185-foot Mosquito Pass, Dyer moonlighted — carrying the mail.