In Historic First, NASA Lands on Asteroid and Collects Samples of Debris That Helped Form Our Earth – Good News Network

Four years into its mission more than 200-million miles from Earth, NASA’s OSIRIS-Rex spacecraft landed on an asteroid to retrieve a sample of primordial dust and pebbles from the celestial body that “could have helped seed life on Earth”.

This well-preserved, ancient asteroid known as Bennu offers scientists a window into the early solar system as it was first taking shape billions of years ago.

The historic grab was a first for NASA, which, after a decade of planning, launched the OSIRIS-REx (Origins, Spectral Interpretation, Resource Identification, Security, Regolith Explorer) in September, 2016.

With pre-programmed instructions, it unfurled its robotic arm, and briefly touched down to collect a 60-gram (2-oz) sample from the surface for delivery to Earth in 2023.

“Our industry, academic, and international partners have made it possible to hold a piece of the most ancient solar system in our hands,” said NASA Administrator Jim Bridenstine.

On October 20, it fired its thrusters to nudge itself out of its orbit around Bennu. It extended the shoulder, then elbow, then wrist of its 11-foot (3.35-meter) sampling arm, and transited across Bennu while descending about a half-mile (805 meters) toward the surface. After a four-hour descent, at an altitude of approximately 410 feet (125 meters), the spacecraft executed the “Checkpoint” burn, the first of two maneuvers to allow it to precisely target the sample collection site.

CHECK Out: NASA-Designed Perfume Gives You The Smell Of Outer Space – Without Leaving Orbit 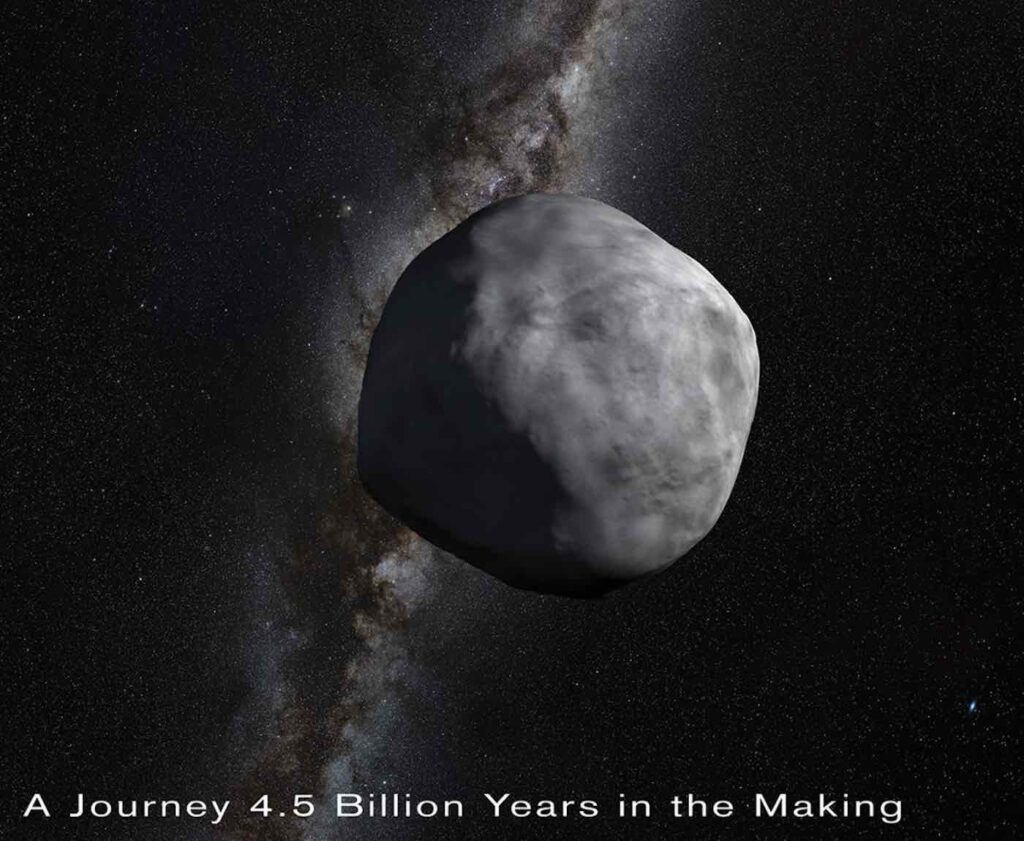 Ten minutes later, the spacecraft fired its thrusters for the second burn to slow its descent and match the asteroid’s rotation at the time of contact. It then continued a treacherous, 11-minute coast past a boulder the size of a two-story building, nicknamed “Mount Doom,” to touch down in a clear spot in a crater on Bennu’s northern hemisphere. The size of a small parking lot, the site is one of the few relatively clear spots on this unexpectedly boulder-covered space rock.

After collecting a sample, it fired its thrusters and safely backed away from Bennu. 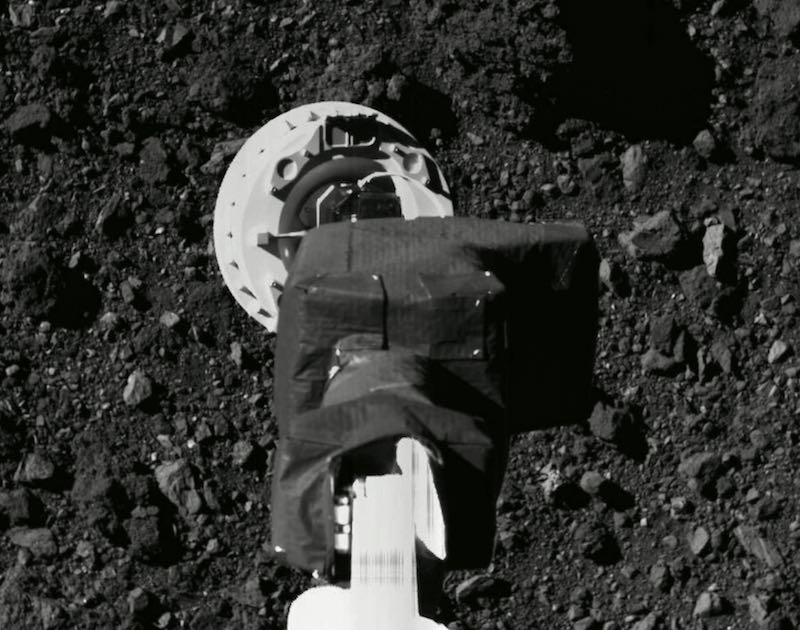 “This was an incredible feat – and today we’ve advanced both science and engineering and our prospects for future missions to study these mysterious ancient storytellers of the solar system,” said Thomas Zurbuchen, associate administrator for NASA’s Science Mission Directorate. “And we can’t wait to see what comes next.”

Two days after touching down on the asteroid, NASA’s OSIRIS-REx mission team received images that confirmed the spacecraft had collected more than enough material to meet one of its main mission requirements, then it spent two days working around the clock to carry out the stowage procedure. Given the distance from Earth, the team needed to work with a greater than 18.5-minute time delay for signals traveling in each direction. (Watch a cool animation below…)

The sample arm was then retracted to the side of the spacecraft for the final time, in preparation for its departure from Bennu in March 2021—the next time Bennu will be properly aligned with Earth for the most fuel-efficient return flight.

“Today’s TAG maneuver was historic,” said Lori Glaze, Planetary Science Division director at NASA Headquarters in Washington. “The fact that we safely and successfully touched the surface of Bennu, in addition to all the other milestones this mission has already achieved, is a testament to the living spirit of exploration that continues to uncover the secrets of the solar system.”

LOOK: Glimpse of God? The Hubble Telescope’s 12 Best Photos on the 30th Anniversary of its Launch into Orbit

OSIRIS-REx arrived at Bennu Dec. 3, 2018, and began orbiting. The spacecraft is scheduled to return to Earth Sept. 24, 2023, when it will parachute into Utah’s west desert where scientists will be waiting to collect it.

NASA’s NEAR spacecraft in 2001 was the first human-made object to orbit and the first to land an asteroid. It survived touchdown on the asteroid and returned valuable measurements from the surface for about two weeks.

WATCH a cool video showing the collection procedure—and follow the progress of Osiris-Rex on the NASA website or at the mission page: AsteroidMission.org.