Inflatable hot tubs that bring the spa to your backyard

Slipping neck-deep into a tub of warm water can feel like discovering the fountain of youth, or at least a much-needed staycation. It’s no surprise, then, that the idea of having your very own hot tub is more tempting than ever before.

However, traditional hot tubs can cost more than $10,000 to purchase and install. That’s a hefty price tag for something we might forget about as soon as we can hit the hot tub at the gym or spa again. So we decided to get the scoop on inflatable hot tubs — because they seem to run around one-tenth of the cost, with some starting around $700. We rounded up picks from the two most trusted and high-quality brands — Coleman and Intex — and scoured through reviews to find shoppers’ favorites. Whether we want to complement an existing pool or just a warm way to relax outdoors as temperatures start to drop this fall, an inflatable hot tub delivers.

To get all of the important details, we also spoke with a man known simply as “Swimming Pool Steve” who is a pool and spa builder with over 25 years in the biz — along with a blog of the same name that provides hot tub and pool advice. According to Steve, “For a test dip into hot tub ownership, or just a low-cost, low-frills approach to hot water therapy, an inflatable hot tub is definitely worth a look.”

How to shop for an inflatable hot tub

Get leveled: Although they might look similar, inflatable hot tubs are not the same thing as inflatable kiddie pools. Steve says, “Just like any hot tub, these require a stable, flat concrete or paving stone pad to sit on. It is important that the ground is level to support the large and dynamic weight of the water.”

Size it up: Steve says that “choosing the right one for you will be a matter of size.” He also shares that two- and four-person models seem to be the most popular. Why? Tubs can take a long while to fill up and warm up, so this is a time when smaller is better.

Decide on jet preference: Sure, where you put it and what size you want are the first two things to consider, but Steve adds you should also consider the “choice between the cheaper air bubbler jets and the more expensive water jets with booster pump system.” According to our research, water jets are tough to find in inflatable hot tubs, but luckily the reviews of air jets are great. Just note that all jets are noisy when running.

Take its temperature: One thing Steve says could be considered a con to buying an inflatable hot tub is its ability to get up to and hold an optimal temperature. “Inflatable hot tubs might take longer than more expensive systems to heat up to temperature,” advises Steve. “The heater is minimally sized, a compromise with plug and play spas, and as such, in very cold temperatures the tub may likely struggle to hold maximum temperatures.” 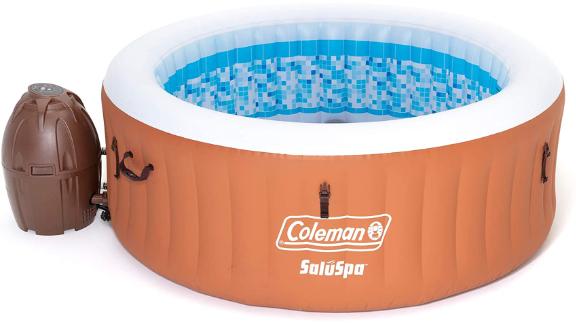 Although this spa claims to be for four people, its petite size makes it spacious and comfy for two. With a maximum water depth of 1.67 feet and a 107-gallon capacity, it might seem like this isn’t going to deliver a real spa experience, but the 120 air bubble jets will prove otherwise. 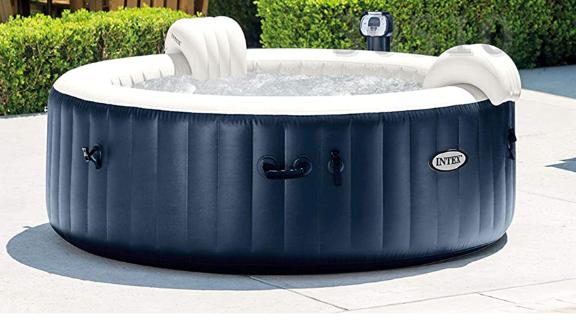 Complete with a set of seats, cup holders, a drink tray and headrests, this six-person inflatable hot tub is all about the amenities. Packed with over 170 jets, the tub can be ready for water in just 20 minutes and can be deflated easily for storage. There’s even a control panel so you can control the jets at the press of a button. 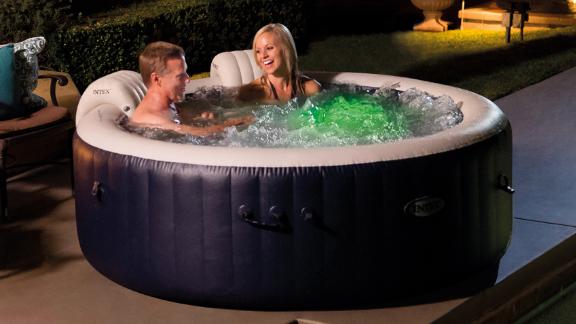 This 290-gallon behemoth comes with all of the bells and whistles, including a cozy six-person capacity. From an LED color-changing underwater light and an insulating ground cloth to two included headrests and hard water treatment system, there’s not much this inflatable hot tub kit doesn’t include. But Steve admits that no matter which inflatable hot tub you choose, you can’t beat the fact that you “simply set them up, fill them up, heat them up and enjoy.” 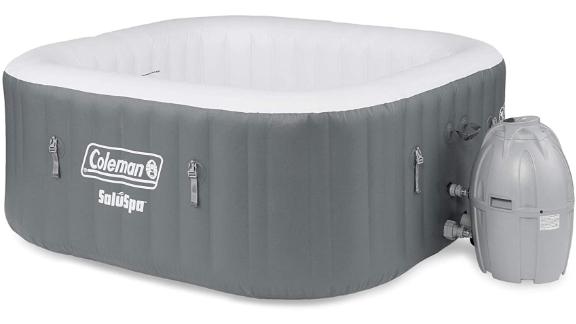 This well-reviewed inflatable tub from Coleman is a square shape, which makes it easier to fit four guests without feeling cramped. With about 250 gallons and approximately 70 inches on each side, this is notably larger than the two-person Coleman mentioned above. As one reviewer writes, “It was easy and fast to put up. I was not only surprised with the amount of bubbles and pressure but totally thrilled with my first use of it, and it only gets better each time I do use it.” 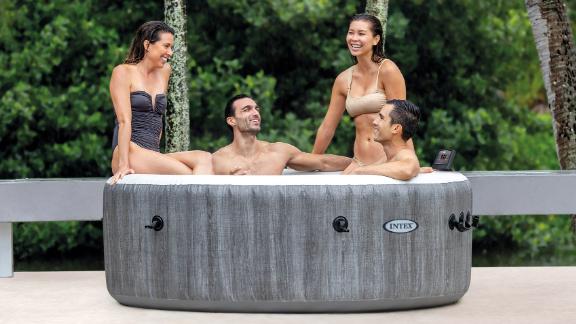 If aesthetics are your thing, this large inflatable hot tub comes in a lovely gray wood finish and has everything you’ll need for an easy setup: an insulated cover, a filter, a hard water system, LED lights, two headrests, an inflation hose and even a bag to help store it all. 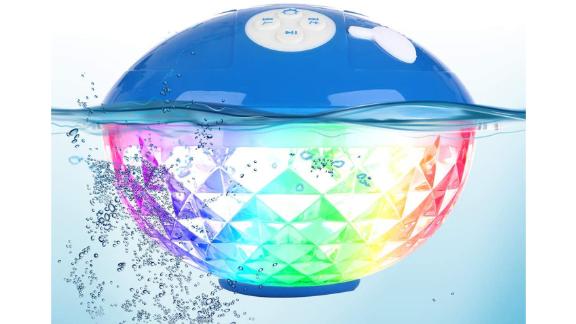 Add a little ambiance to hot tub soaking sessions with this waterproof, floating Bluetooth speaker and LED light show. The Bluetooth feature connects to your phone, and the speaker accepts voice commands so you can accept and make calls without moving a muscle. For extra fun, play with the seven lighting settings. 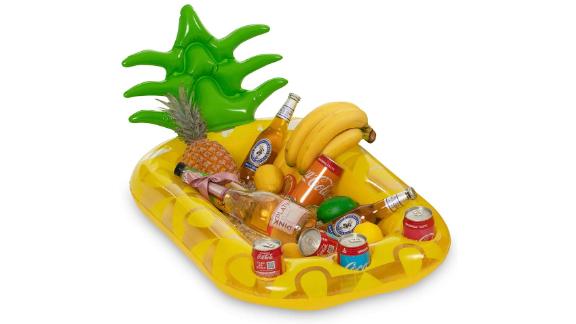 Don’t get out of the tub to grab a drink; float it on this whimsical pineapple tray. It has three cup holders and a large center bowl for snacks, sunscreen or anything else you might need. 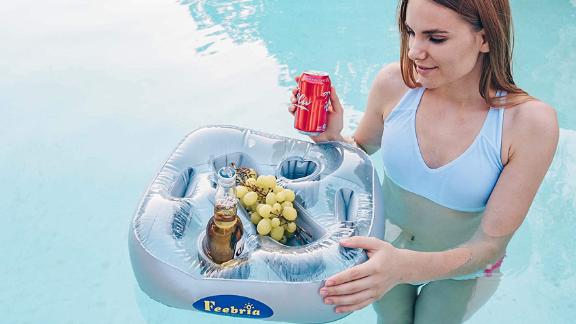 OK, maybe the pineapple drink holder is a bit much for your taste. In that case, this drink float should do the trick. It has two cup holders, two phone holders and a space in the center for other bits and bobs. 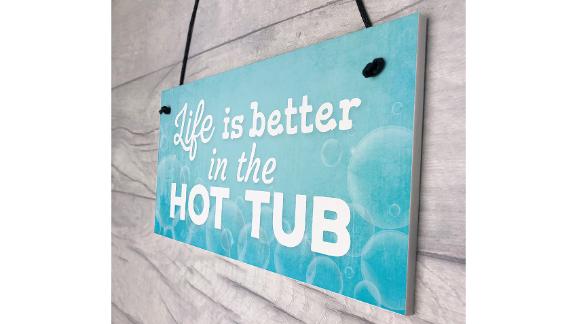 This plastic sign that reads “Life Is Better in the Hot Tub” is a lighthearted piece of decor that says what everyone probably already knows but might not say out loud. 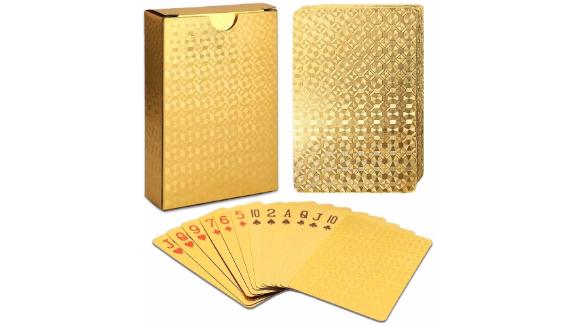 Quietly relaxing in the hot tub can be sublime…for a while. Stay a little bit longer by bringing along a deck of these waterproof playing cards. 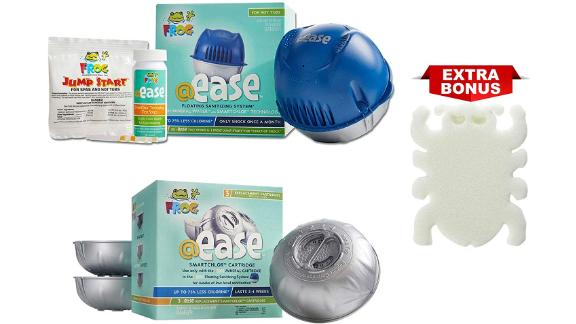 This kit will keep the hot tub water crystal clear and the surfaces inside the hot tub free from slippery slime. Each floating cartridge flips over when it’s empty so you know when to replace it. 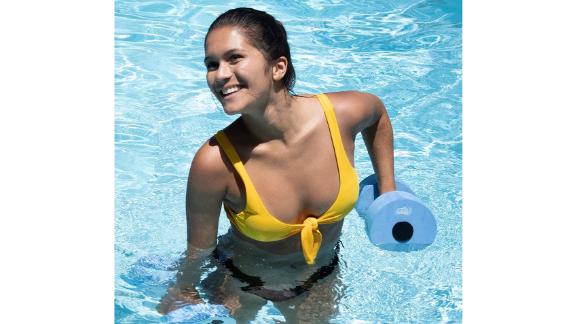 If your reason for getting an inflatable hot tub is not just for relaxing but for exercising or hydrotherapy, then these aqua therapy dumbbells will add resistance to your workout.