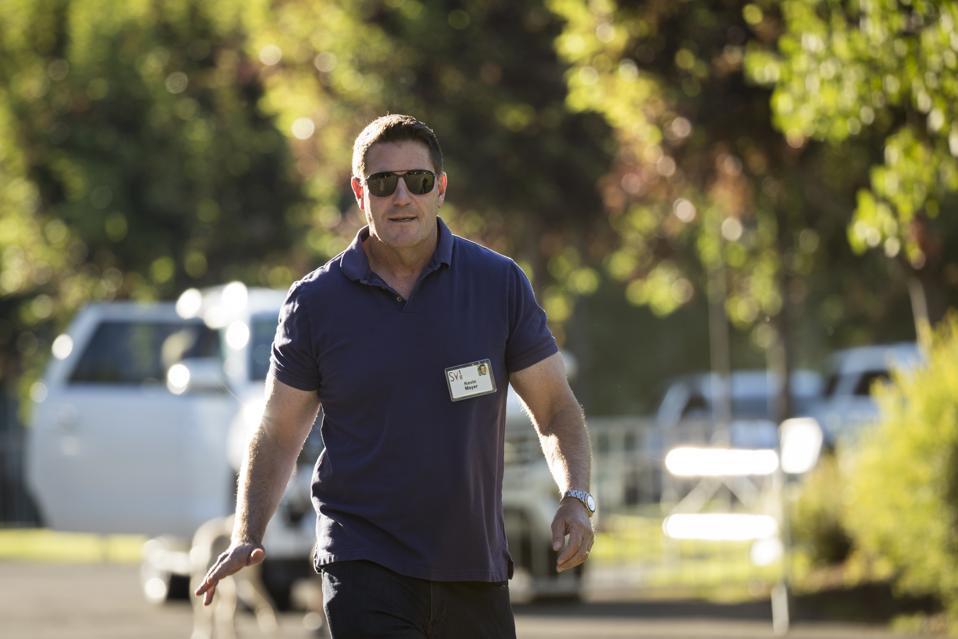 SUN VALLEY, ID – JULY 12: Kevin Mayer, chairman of direct-to-consumer and international business at … [+] The Walt Disney Company, attends the annual Allen & Company Sun Valley Conference, July 12, 2018 in Sun Valley, Idaho. Every July, some of the world’s most wealthy and powerful businesspeople from the media, finance, technology and political spheres converge at the Sun Valley Resort for the exclusive week-long conference. (Photo by Drew Angerer/Getty Images)

Two days ago, TikTok, the ascendant social media platform that has stormed out of China and seized the attention of American internet culture in the last two years, revealed its boldest move yet. It had wooed top Walt Disney DIS executive Kevin Mayer away from the C-suite of the world’s largest entertainment company to be its new CEO.

And as soon as that news came out, Jacob Pace’s inbox dinged. Pace, 21, runs @flighthouse, one of the biggest TikTok accounts with 24.7 million followers that might be best described as a 21st century MTV. And that incoming email was from a industry consultant Pace knew, and it was telling him to buckle up for what could be a fast ride: Mayer will likely take TikTok on a content-creation binge, and with a long history of leading Disney’s acquisition deals, he’ll likely be hunting for juicy targets like @flighthouse.

“A lot of people were super amped,” says Pace. “He comes from entertainment. It’s going to be dope.”

And if the trajectory of other fast-moving social media networks–Twitter, Snapchat, Instagram–is any indication, TikTok stands to further disrupt and fundamentally reshape what is already a rapidly overturned media business.

In the first quarter, TikTok was downloaded 315 million times across Apple and Android phones, the most quarterly installs for an app ever, according to SensorTower, which monitors app downloads. And with the world stuck in lockdown usage has surged, with total downloads now reaching more than 2 billion. Even more menacing for its competitors: 40% of its users are between 16 and 24, and addicted, spending nearly an hour on the app each day on average.

And if Mayer delivers for TikTok’s parent company, ByteDance what he did for Disney during more than two decades there, the payoff could be even greater.

“It was our biggest social media focus for the first quarter, and I think it’s going to continue to be our biggest focus for the rest of the year,” says John Robinson, the president of 100 Thieves, a popular esports team that has traditionally funneled its efforts toward YouTube and Twitch. “We’re pulling some of our best creatives and ‘some of our best talent and taking time that normally would be spent on YouTube and putting them on TikTok. It’s a massive, massive opportunity.”

Bytedance already has accomplished a feat that other Chinese internet giants, like Alibaba BABA and Tencent, have failed to do: create a brand with an extensive following in the West. It managed to do so so with TikTok’s goofy yet infectious videos of bathroom dances, pranks and cute pet videos. It needs an executive to fan its wildfire growth worldwide.

Which explains why ByteDance’s billionaire CEO, 36-year-old Zhang Yiming, wasted no time in courting Mayer to replace the person who’d been running TikTok from China, Alex Zhu. Even before Mayer’s arrival, TikTok was reportedly shopping an idea for a reality-style TV show around Hollywood, although the details for that plan aren’t entirely clear.

The first calls went out three months ago after Mayer was bypassed for the coveted Disney prize of succeeding outgoing CEO Bob Iger in favor of former parks and experiences chief Bob Chapek. Zhang had been searching for the right candidate since October, someone with the right mix of digital savvy and leadership experience to manage TikTok’s growth across the U.S., Europe, India and Brazil.

Mayer clearly fit the bill as the executive credited with building Disney’s lone bright spot in a business crushed by the pandemic: Disney+, the wildly successful streaming service. He had the digital and strategic chops Zhang needed to get TikTok to the next level.

The Disney executive took meetings in New York and California as he managed Disney+’s European rollout and then shifted conversations to Lark, ByteDance’s video conferencing platform—Zhang in Beijing, Mayer in Los Angeles—as the world went into lockdown.

“He was a reluctant candidate at first because he had such an important role at Disney,” says ByteDance board member Bill Ford, who was involved in the recruitment effort. Mayer’s interest grew over numerous conversations with the Chinese internet entrepreneur, whom Ford likened to Alibaba founder Jack Ma–conducted via video chat because of the pandemic. “It’s kind of an interesting courtship. I guess that’s the world we’re in.”

Disney, which has deleted Mayer’s corporate bio from its site, did not respond to a request to interview him for this story. Mayer has remained respectfully mum about his plans for TikTok.

But his presence has guys like Pace–and other content providers like him–salivating. Whatever TikTok can’t create, Mayer will be poised to buy, a veteran of some of the company’s most prescient acquisitions, including Pixar, Lucasfilm, Marvel and its latest big gulp, Fox.

“When you have a platform that big with that many users, there’s going to be any number of opportunities to layer on other services, other products, other companies,”  says Rob Fishman, founder of BratTV. Like @fligthouse, BratTV is an obvious partner for TikTok—or potential acquisition target. The web-native studio this week debuted a new YouTube show, Attaway General, starring one of the most popular TikTokers, Dixie D’Amelio.

With its massive reach and firehose of content, TikTok will measure success in billions. ByteDance is closely held and doesn’t release financial details, but TikTok watchers can find a useful roadmap in YouTube and its transition from user-generated dumping ground to a dominant force in media. YouTube, which is owned by Alphabet, brought in $15.5 billion in sales last year, up from reportedly $1 billion a decade earlier. Among Mayer’s top priorities is to take some of those dollars away.

Zhang is looking to the Harvard Business School graduate for much more, naming him ByteDance’s chief operating officer as well, making him the billionaire’s right hand in managing an ecosystem of apps that are widely popular in Asia, including Lark (a bit like Slack plus video conferencing) and Helo (a bit like Facebook). It also gives him another advantage: an American leader at a company born out of a secretive nation in a hostile time. TikTok was launched first in China as an app called Douyin in 2016 and imported to America when it merged with another app, Music.ly, the following year.

Mayer’s polished style, Disney pedigree and action-figure good looks–his lantern jaw and abundant confidence earned him the nickname Buzz Lightyear on the Disney lot–made him a popular Hollywood figure, and Zhang is hoping he can do the same in Washington, D.C.

Some conservative politicians fear that the app’s roots in China could lead it to misuse user data and violate privacy. Senator Josh Hawley, of Missouri, in March introduced legislation to ban TikTok from any government device, and as soon as Mayer was announced as the new CEO, he sent this tweet:

TikTok also faces renewed criticism that it is not satisfying a FTC settlement’s requirements to better protect young users. Mayer is a former Disney executive who built technology products partly meant for kids—that would be Disney+, the streaming service—and as a result, he should theoretically be familiar with satisfying the government’s laws around children’s online privacy.

“Essentially they hired him to be an American face of a Chinese company,” says Rohit Kulkarni, an MKM Partners analyst who covers internet companies. “And to be a bridge with advertisers.”