Interactive: Biden’s win was more decisive than you think 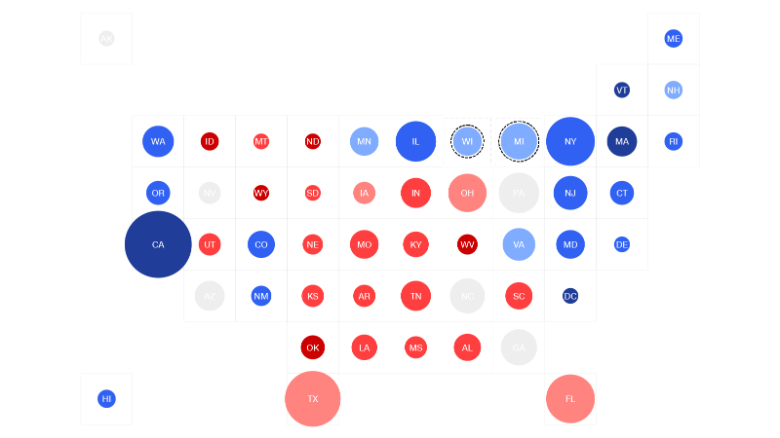 Rust Belt states have been the base of Democrats’ electoral map for a generation, but along with winning them back, Biden also expanded the map into the Sun Belt and won two states that have not gone toward Democrats in decades.

The coalition of states that hands Biden the White House represents both the party’s past and its future.

Democrats can’t count on the Rust Belt. While Biden did rebuild the blue wall, it’s clear that Democrats can’t bank on the Rust Belt. Biden, a Pennsylvania native, cut into Trump’s lead with White men in the Keystone state, in particular, over his 2016 margin when he faced Hillary Clinton. That’s not a path future Democratic candidates may be able to achieve.

Look to states like Ohio and Iowa, which Democrats thought would be competitive but which ultimately went comfortably to Trump to understand the difficulty the party still faces with White, socially conservative voters.

Biden, with help from new activism among young Black Democrats in Georgia as well as a coalition of Latino voters and disaffected Republicans in Arizona, is leading in two states Democrats have long had in their sights.

While he failed to win the massive prizes of Texas and Florida, which Democrats had hoped to win on similar terms, it’s clear the country is changing and states once unthinkable for Democrats to win are now on the table.

And Biden’s failure in Texas and Florida holds warning bells for Democrats. Their efforts to turn out and win Latino voters needs help. It’s also a lesson that Latino voters are not a monolith: Cuban-Americans in Miami proved receptive to Trump’s allegation that Democrats would veer the country toward socialism.