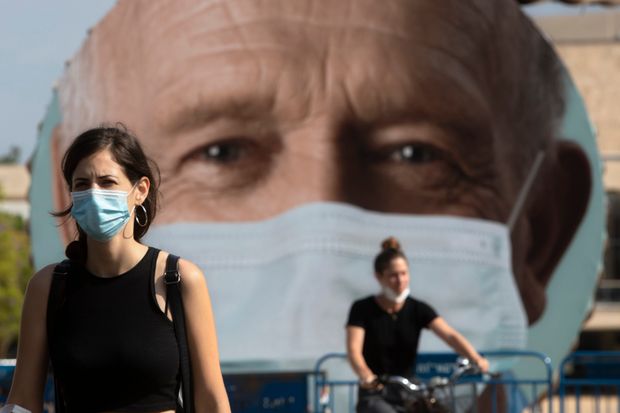 Israel has one of the worst rates of daily coronavirus infections per capita in the world.

TEL AVIV—Israel ordered all nonessential businesses and synagogues to close starting Friday, tightening restrictions a week after imposing a second nationwide lockdown as the government struggles to contain a resurgent coronavirus outbreak.

Under the new measures, which will last at least through Oct. 10, all private businesses except those considered vital—such as supermarkets and pharmacies—will be closed. Residents will also have to remain within a one-kilometer radius from their homes.

The lockdown imposed last Friday shut down businesses that cater to the public, including gyms and restaurants. But a majority of private businesses in Israel were allowed to stay open and employees were permitted to travel to work. Synagogues were allowed to open with limited capacity.

The tightened restrictions came after Israel recorded nearly 14,000 new infections in the past 48 hours.

Prime Minister Benjamin Netanyahu defended the second lockdown this week, saying at the start of a late-night cabinet meeting on Wednesday that Israel was facing “a moment of truth” with morbidity rates and severe cases rapidly increasing.

The latest measures prompted finance and business leaders in the government and private sector to warn of dire economic consequences.

The economy was already struggling due to the pandemic, with the International Monetary Fund expecting it to contract more than 6% this year. Nearly a fifth of the Israeli workforce is unemployed or on unpaid leave, according to the Israeli National Employment Service. Israel’s chief economist said a closure of three weeks could cost the Israeli economy over $10 billion.

“It’s possible to advance measures to curb the disease without striking a fatal blow to factories and businesses in the private sector,” said Israeli Finance Minister Israel Katz, a close ally of Mr. Netanyahu who nevertheless said he voted against the tightened restrictions.

Ron Tomer, president of the Israeli Manufacturers Association, said Wednesday he expected a sharp spike in unemployment under a full lockdown.

“With every decision, [the Israeli government] destroys another business sector,” Mr. Tomer said.

Israel has one of the worst rates of daily coronavirus infections per capita in the world. Many Israelis have called on the government to take drastic measures and accused it of bungling its response to the outbreak. During the country’s first lockdown in late March and early April, the private and public business sectors were able to continue in a limited format.

Just over a quarter of Israelis trust Mr. Netanyahu to successfully lead the country’s battle against the pandemic, according to a poll released Wednesday by the Jerusalem-based Israel Democracy Institute. At the start of April, that number stood at 57.5%.

“Whoever thinks we can work with a surging pandemic, with rising mortality and morbidity, without this affecting the economy is mistaken, and if we need to act and take tough measures it is preferable to do so now during the holidays when the economy is in a lower gear,” Mr. Netanyahu said late Wednesday.

Get a coronavirus briefing six days a week, and a weekly Health newsletter once the crisis abates: Sign up here.

The lockdown comes during the Jewish holidays that began last Friday with Rosh Hashana and will extend through Yom Kippur and Sukkot. These holidays typically involve millions of Jewish worshipers attending synagogues and gathering for prayer services.

Synagogues will be closed for the entirety of the lockdown, except on Yom Kippur, during which they will be subject to yet unpublished directives from the Health Ministry. Regulations will force the majority of worshipers to pray outdoors during the day’s long services and fast, but only up to 20 people per prayer group.

Political demonstrations in Israel will also be restricted to 20 people and only outdoors for the duration of the tightened lockdown,

The country has 56,900 active infections and more than 206,000 total infections since the start of the pandemic, according to the Israeli Health Ministry. At least 1,335 have died due to Covid-19.

The Second Wave of Coronavirus

Appeared in the September 25, 2020, print edition as ‘Israel Tightens Lockdown as Virus Spreads.’