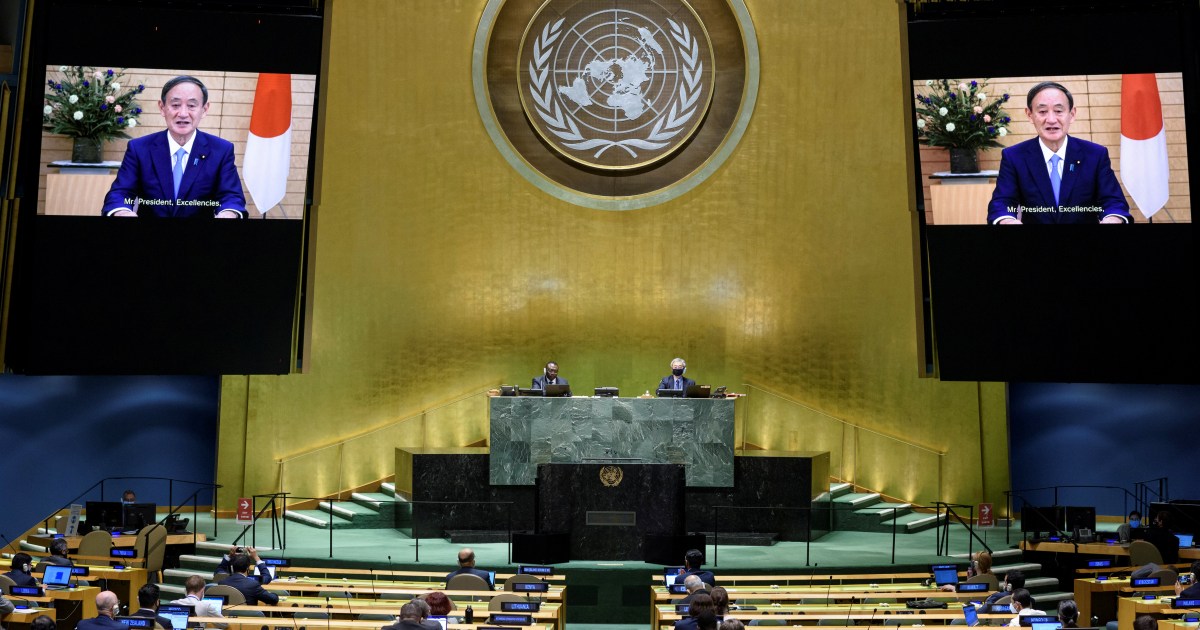 Yoshihide Suga, Prime Minister of Japan speaks virtually during the 75th annual UN General Assembly, which is being held mostly virtually due to the COVID-19 pandemic [United Nations/Handout via Reuters]

Japanese Prime Minister Yoshihide Suga has told the United Nations General Assembly that his government is determined to host the Tokyo Olympics in 2021 after the games were postponed due to the coronavirus pandemic.

The Games were originally scheduled for this summer, but were put off for a year in March by the International Olympic Committee and the Japanese government.

“In the summer of next year, Japan is determined to host the Tokyo Olympic and Paralympic Games as proof that humanity has defeated the pandemic,” Suga said in a recorded message on Friday.

“I will continue to spare no effort in order to welcome you to Games that are safe and secure,” Suga said in his debut speech to the United Nations as Japan’s new leader.

Suga became prime minister this month after Shinzo Abe stepped down because of poor health.

Organisers of the Tokyo Olympics on Friday proposed cutting back the number of staff at next year’s Summer Games and shortening the opening period for training venues, as part of a plan to hold a streamlined event amid the pandemic.

Medical experts have warned that the enormous international event could be difficult to hold if the pandemic is not under control by next summer, but Olympic officials insist that the Games will go on. International Olympic Committee vice president John Coates said on Friday “this has to happen,” citing athletes who would be devastated by a cancellation.

Enthusiasm for the Games appears to have waned in Japan, with polls over the summer finding just one in four Japanese want to see them happen, and most backing either a further postponement or outright cancellation.

In his video message, Suga called for a multifaceted approach to tackling the global pandemic, and said Japan will work to ensure equitable access to coronavirus treatment and vaccines for people in developing nations.

“Japan fully supports the development of therapeutics, vaccines and diagnostics, and works towards ensuring fair and equitable access for all, including those in developing countries,” he said.

As part of its steps to help developing countries hit by the pandemic, Japan is offering up to $4.5bn in emergency loans, Suga said.

The Japanese prime minister also told the UN assembly he is ready to meet North Korean leader Kim Jong Un without any preconditions to resolve the long-running issue of Japanese citizens abducted by the North decades ago, reiterating the stance of his predecessor.

“Establishing a constructive relationship between Japan and North Korea will not only serve the interests of both sides but will also greatly contribute to regional peace and stability,” he said.