Keeping eyes on the sky through the rest of October – KBTX

BRYAN, Texas (KBTX) – The night sky through the second half of the month of October is filled with plenty of opportunities to keep an eye to the sky, and it all starts Tuesday evening.

The red planet is at its closest orbit to Earth this year and will not be this close again until September 2035. This close approach — a little over 38.5 million miles away — occurred on October 6, 2020, and will cause Mars to look exceptionally bright all throughout October.

The evening of the 13th is when Mars is in opposition. This phenomenon occurs when two planets sit exactly on the opposite side of the sun, meaning in this case, the Earth sits exactly between Mars on one side and the sun on the other side. Opposition occurs at 6PM CDT. When this happens, Mars will start rising in the east just as the sun is about to set in the west. Then, as the sun comes up Wednesday morning, Mars will be setting in the western sky.

Opposition occurs on average every two years. This is because it takes Mars twice as long to make a trip around the sun than Earth’s revolution. 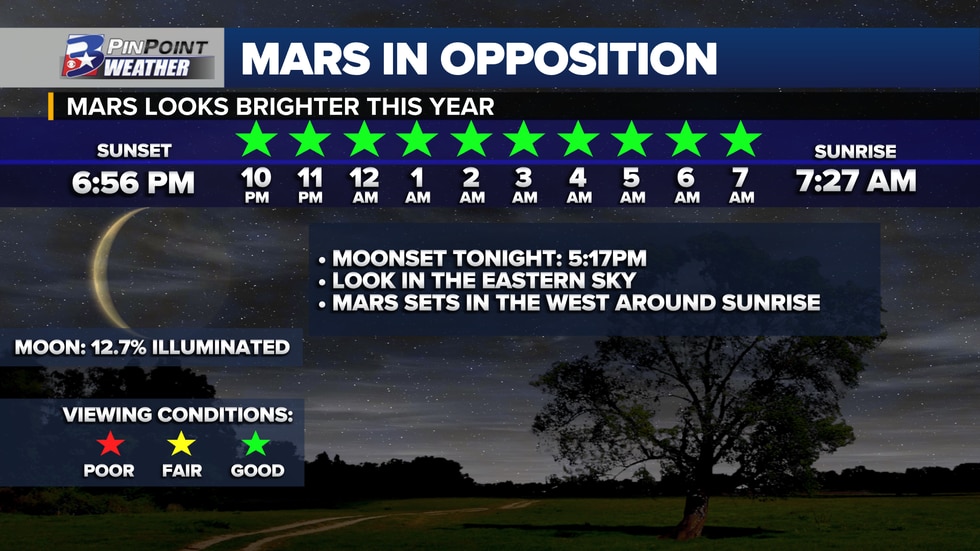 With little in the way of light pollution from the moon or clouds, once the sun sets, Mars will look very bright in the eastern sky as it rises overnight before setting in the west by sunrise.(KBTX)

With little in the way of cloud cover, viewers in the Brazos Valley should be treated to a great view of Mars as it rises tonight and shines bright. Sunset is at 6:56PM Tuesday.

One of the largest meteor showers of the year is right around the corner as Earth passes through the debris field from Halley’s Comet. This provides a stunning show of meteors shooting across the nighttime sky towards the end of October provided skies are clear. The meteor shower is visible from October 2nd until November 7th but peaks on Wednesday, October 21st.

The best way to view these meteors is to find a spot away from city light and give your eyes about 20 to 30 minutes to adjust to the dark. The good news is that the nights leading up to the peak, the moon will be setting before midnight creating a darker sky for comets to stand out in, and a new moon is set to occur on the 16th further limiting its light pollution in the sky.

With a new moon in the middle of the month, that means a full moon is right around the corner. This October features two full moons. The first occurred on October 1st and was called the Harvest Moon. The second will occur on Halloween, October 31st. This is known as the Hunter’s Moon.

It is rare to have two full moons in one month, but when it happens it is called a blue moon. Each full moon cycle lasts 29 days, and similar to Leap Day, the time is made up by a second full moon occurring within a calendar month. This happens on average every two and a half years with the previous instance back in March 2018.

Make time to get outside and enjoy the sights the rest of October has to offer. If you are able to snap a great photo or video, we’d love for you to share it with us! Click here to submit photos or videos.