A video of televangelist Kenneth Copeland laughing at the media declaring Joe Biden‘s election as president of the United States has gone viral on social media.

“The media said what?” Copeland, a supporter of President Donald Trump, is seen telling an audience in the clip before bursting into laughter.

“The media said Joe Biden’s president!” Copeland continues, before repeatedly saying “haha” for at least 30 seconds and prompting the audience to applaud and stand up.

The clip, posted on Twitter by Right Wing Watch on Sunday night, has since racked up more than 8.7 million views.

Televangelist Kenneth Copeland laughs at the media for declaring that Joe Biden has won the election and will become president. pic.twitter.com/ARHqmsEbo7

Writer Laird Barron warned that while the fake laughter may appear “cheesy,” it was designed to elicit a reaction from viewers.

“This filtered excerpt might seem cheesy. It’s not. It’s a variation of command voice/presence techniques employed by law enforcement and the military,” Barron tweeted. “Motivational speakers use it, albeit less violently. This is professional brainwashing for your viewing pleasure. It works.”

Matthew Sheffield, a former reporter for The Hill who has also previously written for conservative media outlets, also warned about the danger of Copeland’s words.

Copeland “is a billionaire televangelist who most people haven’t heard of,” Sheffield tweeted. “His followers believe every word he says, no matter how disturbing.”

This filtered excerpt might seem cheesy. It’s not. It’s a variation of command voice/presence techniques employed by law enforcement and the military. Motivational speakers use it, albeit less violently. This is professional brainwashing for your viewing pleasure. It works. https://t.co/5F3r8YlukG

The guy in the video below is a billionaire televangelist who most people haven’t heard of.

His followers believe every word he says, no matter how disturbing. https://t.co/F8Wa7v6B9F

Earlier this year, Copeland made headlines after saying he healed his viewers of coronavirus through their television screens.

A video of Copeland also went viral last year after he was confronted by a reporter, who questioned him about his extravagant lifestyle.

The reporter pressed Copeland on controversial comments he had made in the past about why he needed a private jet.

He couldn’t “talk to God” while flying commercial, Copeland reportedly said. “You can’t manage that today, in this dope-filled world, get in a long tube with a bunch of demons,” he had added. “And it’s deadly.”

Both Copeland and White served on the Trump’s Evangelical Advisory Board during his 2016 presidential campaign.

White said in her prayer that “demonic confederacies” were attempting to steal the election from Trump.

The Associated Press and television networks declared Biden the winner of the 2020 election on Saturday, after he was projected to win more than the 270 Electoral College votes needed to clinch the presidency.

Trump has yet to concede and has repeatedly falsely claimed the election was stolen from him, while vowing to take legal action to challenge the result. 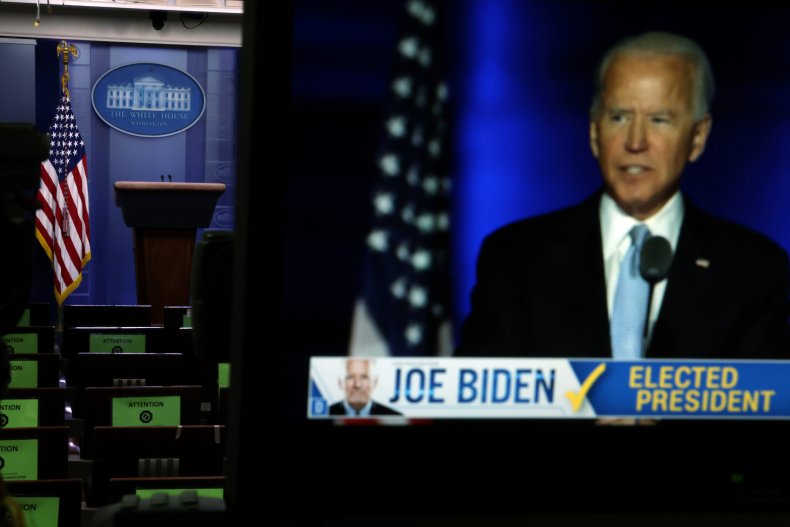 U.S. President-elect Joe Biden is shown on a TV in the James Brady Press Briefing Room of the White House as he addresses the nation from outside Chase Center in Wilmington, Delaware on November 7, 2020 in Washington, DC. Alex Wong/Getty Images
Share this...