During a massive military parade in North Korea, Kim Jong Un rolled out a fearsome missile that can pack several atomic weapons in a single projectile that could likely target any US city by overwhelming defense systems, according to reports.

Weapons experts said the likely engine configuration of the “monster” Hwasong-16 intercontinental ballistic missile would allow it to deliver several thousand pounds of payload anywhere in the US, according to Bloomberg News.

The despot apparently learned from the former Soviet Union that it’s more effective to add warheads to a single system rather than to build more missiles, according to Ankit Panda, author of “Kim Jong Un and the Bomb: Survival and Deterrence in North Korea.”

“They can saturate the defenses by having more re-entry vehicles than the US can ever hope to defend against,” Panda, a senior fellow at the Carnegie Endowment for International Peace, said Monday at a web seminar hosted by South Korea-based NK News.

Panda estimated that the Hwasong-16 could hold as many as four warheads. The Hwasong-15, which Kim launched in November 2017, was believed to have a single warhead, Bloomberg reported.

“We are aware of reports related to the parade. Our analysis is ongoing and we are consulting with our Allies in the region,” Defense Department spokesman Lt. Col. Chris Mitchell told The Post in an email.

The Hermit Kingdom would need to launch 11 single-warhead ICBMs to have at least a 1-in-3 chance of evading missile defense systems and detonating a thermonuclear device on an American city, Panda said.

The more warheads it can fire, the greater the chance of overwhelming US defense systems, he added.

“If the North Koreans have questions about the performance of their own re-entry vehicles, putting multiple re-entry vehicles on a ballistic missile simply increases the chances that one of those will successfully detonate,” Panda said. 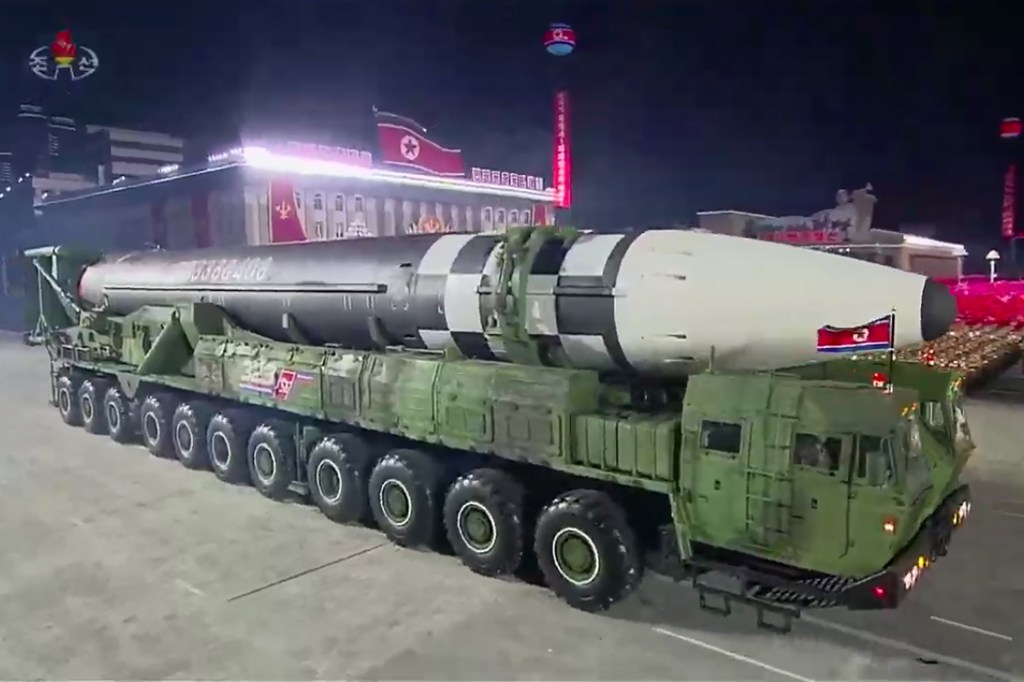 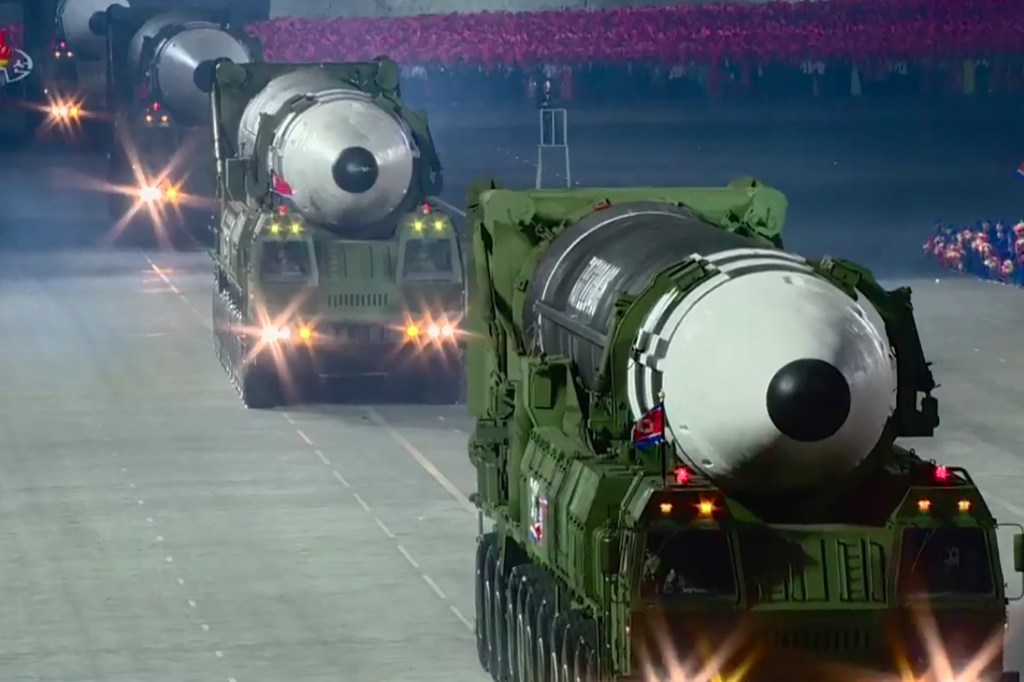 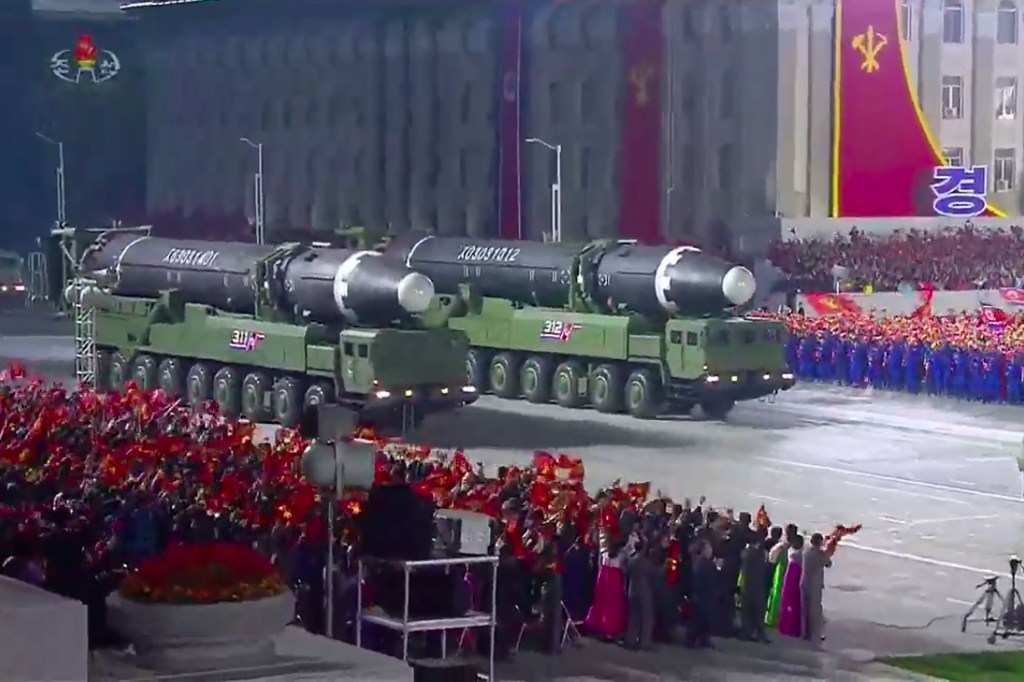 Aides at the National Governors Association have begun considering replacements…

At around 85 feet, the new liquid-fuel missile appears to be about 6 to 9 feet longer than the Hwasong-15, weapons experts estimate. It’s also wider, making it the largest road-mobile ICBM of its type in the world.

The rogue regime displayed four of the new missiles during the parade, each carried by a never-before-seen 11-axle truck.

“It’s huge,” said Melissa Hanham, a weapons expert and deputy director of the Open Nuclear Network who called the missile “a monster.”

During his speech at the parade marking the 75th birthday of the ruling Workers’ Party, Kim said he would only use his arsenal if provoked.

“But if any forces try to use their military power against us, I will preemptively mobilize our most powerful offensive force and punish them,” he said.

The Hwasong-16’s engines may have been tested in December, but its actual performance cannot be assessed until North Korea actually launches it amid political risks for Kim because it would violate international sanctions.

If North Korea did test the missile, it would likely send it on a trajectory to reach an apogee in excess of 3,100 miles — 12 times higher than the International Space Station, Panda said.

Xu Tianran, an analyst for Open Nuclear Network, told the Sun that the missile “could probably reach the whole of the US with a very large, high yield nuclear warhead, or two or more warheads if the warheads are smaller and lighter.”

Markus Garlauskas, a former US intelligence officer for North Korea, said the missile — estimated to have a yield of more than 2,000 megatons — would erase any remaining doubts that Pyongyang could hit the US, according to the UK news outlet.

“If the Hwasong-15 could carry a ‘super-large’ nuclear warhead to anywhere in the US, then the natural question is what can this larger missile carry?” he told Reuters.

Retired CIA analyst Bruce Klingner of the Heritage Foundation said: “The clear message was that, counter to US claims, the North Korean nuclear threat has not been solved.”