A state of emergency was declared in Louisville, Kentucky, in anticipation of protests following an imminent grand jury decision on the police killing of Breonna Taylor.

Taylor, a 26-year-old who worked as an emergency room technician, was killed on 13 March by police serving a no-knock warrant as part of an investigation into an ex-boyfriend.

Taylor was at her apartment with her boyfriend, Kenneth Walker, when police barged in. Walker, who said officers did not announce themselves, fired his gun, believing the police were intruders. One officer was shot in the leg and police fired in return.

No money or drugs were found in the apartment. One of three officers involved in the shooting was fired for “wantonly and blindly” firing his weapon into the home, but no charges have been filed against him or the other officers.

Reports have indicated the Kentucky attorney general, Daniel Cameron, has presented evidence to a grand jury, which would ultimately decide whether to indict any of the three officers involved in the shooting. Cameron would also present the result of his office’s investigation into the case.

It is unclear exactly when he will make an announcement or if the grand jury has begun deliberations.

The Louisville police department announced early on Tuesday morning that it will restrict vehicle traffic downtown “due to increased attention and activity in anticipation of an announcement” and to “ensure the area is as safe as possible for those coming downtown to express their first amendment rights”. 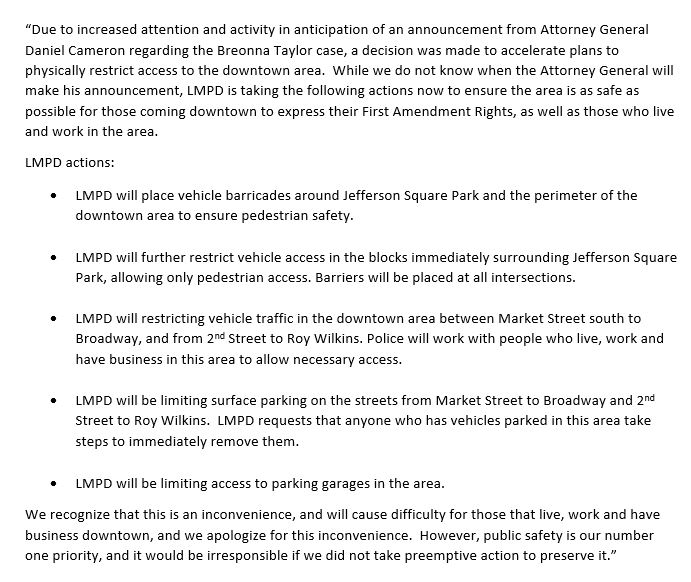 The department also declared a “state of emergency”, which means all off-days and vacation will be cancelled and officers will be expected to work 12-hour shifts. Federal buildings in downtown Louisville have closed, according to local news station WAVE 3, and federal forces have been summoned to protect federal buildings.

In a Tuesday morning tweet, Louisville’s mayor, Greg Fischer, said: “We do not know when the attorney general will make an announcement, or what it will be. Our goal with these steps is ensuring space and opportunity for potential protesters to gather and express their first amendment rights, and to prepare for any eventuality to keep everyone safe.”

As the investigation by the attorney general has progressed, protests have spread in Louisville and across the US. Calls to arrest the officers involved in the Taylor killing have been widespread, with pressure from high-profile figures including the singer Beyoncé, who wrote an open letter to Cameron, urging arrest.

Legal experts have said that whether the officers will be charged is unclear but may be unlikely given the protection that is offered to police.

Self-defense laws in most states, including Kentucky, allow a person to use deadly force against an intruder in their home. But in Kentucky that protection does not allow a person to harm police officers if the person knows or can reasonably assume police have entered their home.