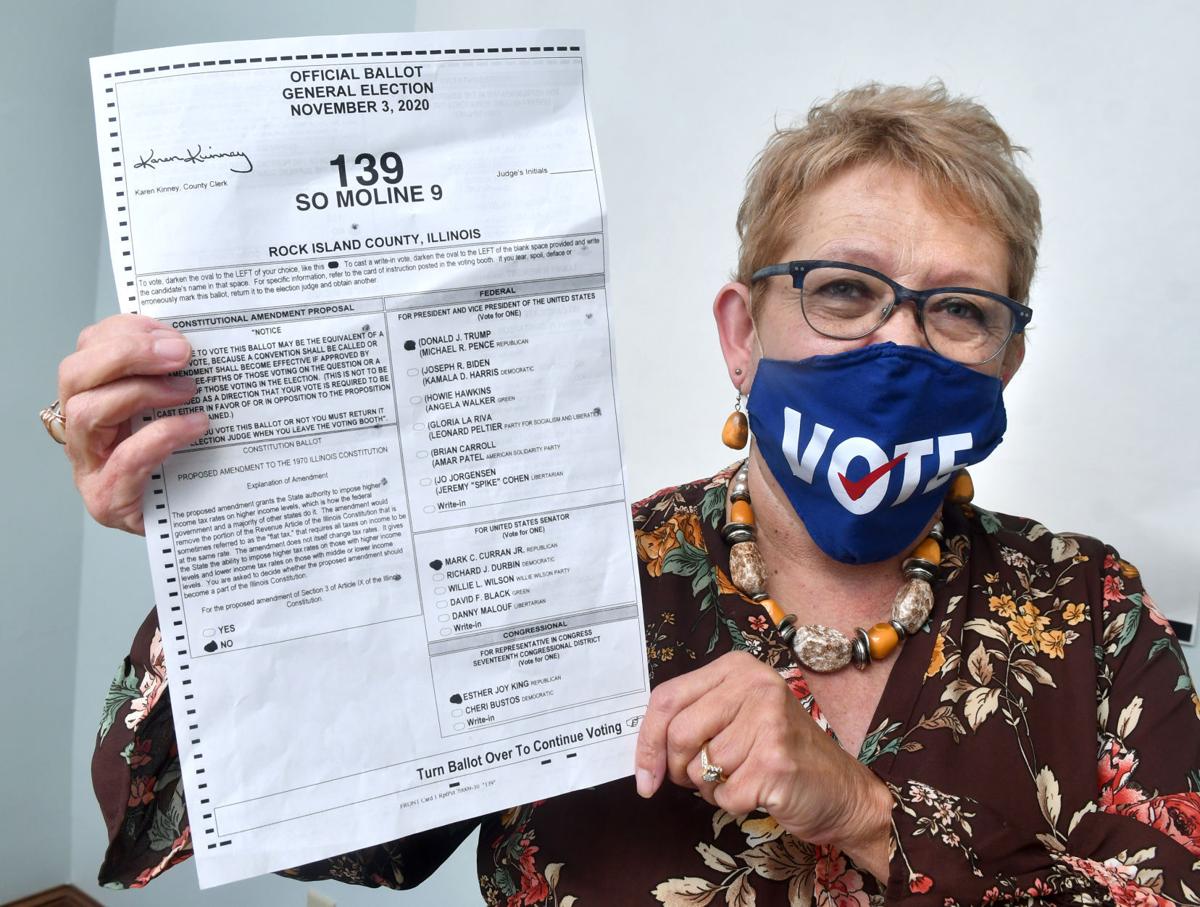 Karen Kinney with a photocopied ballot that was put in Moline mailboxes on Saturday filled out in favor of all Republican candidates.

Moline resident Debbie Lord found an unwelcome surprise in her mailbox on Saturday — a photocopy of an official Nov. 3 general election ballot that had already been filled out.

The ballot came with no envelope and appeared to have been placed on top of mail already delivered by the U.S. Postal Service.

Whoever filled out the ballot chose only Republican candidates and marked “no” against retaining any of the current Democratic justices, including Illinois Supreme Court Justice Thomas Kilbride, who is the target of an aggressive GOP campaign to oust him.

Lord lives on the 1400 block of 25th Avenue in Moline. She is a registered Independent and has no political signs in her yard.

“When I first saw it, I wondered what it was,” Lord said of the ballot. “I thought it was strange it was in my mailbox. The circles had already been filled in with a sharpie.”

Residents in the Wildwood and Velie neighborhoods also received copies of the same photocopied ballot, which has no identifying name or bar code on it.

Rock Island County Clerk Karen Kinney said she’d been contacted by several residents who received the photocopied ballots and was asking that they be turned in to her office immediately. Kinney said she would contact the State Board of Elections to inform them of the ballots.

“This is election tampering,” Kinney said. “It’s a crime, and I believe it’s a crime to put anything in someone’s mailbox without a postage stamp. It’s a copy of someone’s actual mail-in ballot for the general election. It’s ballot No. 139, (from) South Moline (District) 9.”

Kinney said 265 people were issued mail-in ballots in South Moline District 9, but the bar code that would have identified the owner of the ballot was concealed during the photocopy process.

Scott Romine, who lives on the 2100 block of 15th St., said his Ring doorbell video footage captured the activity on Saturday at 3:53 p.m.

In the video, a young Black boy wearing a long-sleeved gray shirt can be seen placing the photocopied ballots in his mailbox and in the mailbox of a neighbor across the street while a white SUV waits nearby. The video clearly shows two Trump campaign signs in Romine’s front yard.

“We have an alert on our doorbell that captured everything,” Romine said. “This young, Black boy dressed in a gray sweatshirt came up and rang our doorbell. Other neighbors who use the Next Door App said they saw two boys putting them in mailboxes. The other boy was older.

“We couldn’t see the driver, but we were able to make out that it was a white Chevy Equinox from 2014 or 2015. We have some (Republican) political signs in our yard, and we thought they were trying to make a statement. All the neighbors got them in the Velie Addition. The ballots were filled out for Republicans. If someone thought they could turn that in, it would be invalidated.”

“There is no absolute way we would be connected to activity like that. Ever,” Mielke said. “And I had no knowledge of it until today. Somebody is trying to cause conflict. No one would do that in our party; it doesn’t make sense. It’s not going to sway anyone’s vote. That’s not how you campaign.”

Lord said she thought the photocopied ballots could confuse and mislead some voters, especially the elderly.

“There was no envelope with it,” she said. “I was a little surprised; I want people to be aware of it.”

Keep up on the latest in national and local politics as Election 2020 comes into focus.