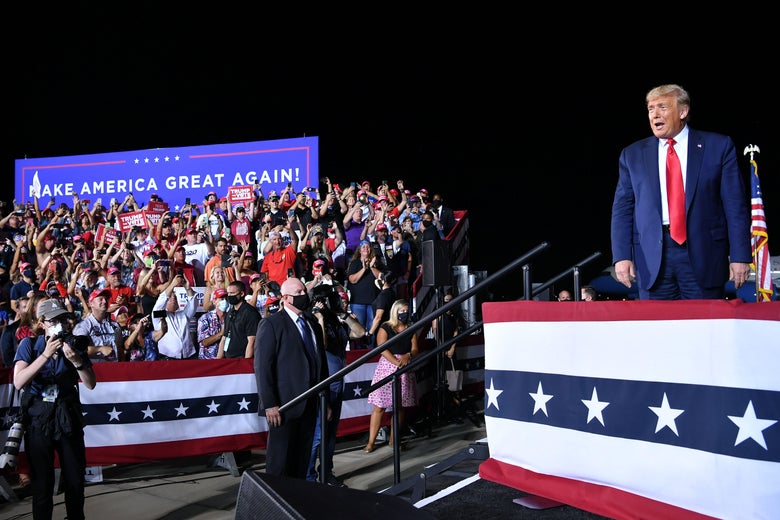 During the presidential debate Thursday, President Donald Trump claimed he was the “least racist person in the room.” A day later, he spoke at a rally at The Villages, a huge retirement community in central Florida, in front of a man who repeatedly flashed a hand gesture that has become a symbol of white supremacy. Vox journalist Aaron Rupar edited a video compilation that shows how the same man who was standing behind Trump flashed the gesture numerous times throughout the president’s speech.

Here’s a supercut of a guy throwing up what appears to be a white power hand gesture throughout Trump’s rally in The Villages, Florida pic.twitter.com/QdZv3yIyyl

Sometimes the man who flashes the hand gestures appears to be responding to something specific Trump says. At one point, for example, he made the sign when Trump said, “We have made America proud again.” Other times he seems to flash the sign without any real prompting. But he appeared to be standing behind Trump the entire speech and seemed to make a particular effort to make sure his sign was visible to the camera.

The guy throws up the sign again right after Trump says, “We have made America proud again.” pic.twitter.com/iH67wrY5MS

Many on social media were quick to point out that the man who was flashing the hand signs appeared to be wearing a hat of the Proud Boys, the far-right organization that the FBI classifies as an “extremist group” and the Southern Poverty Law center designates as a hate group. Some even pointed out that he appeared to look like one of the members of the Proud Boys who provided security for a political rally in Florida that was attended by Rep. Matt Gaetz.

Just a proud boy in a prime spot at a Trump rally holding a white power sign. The same guy who was hired as a security guard for an event Matt Gaetz recently attended. (h/t @RebekahCastorTV @atrupar @FZornosa90) pic.twitter.com/Us0fso2WCt

The guy who flashed the white power sign behind Trump at his rally in FL was wearing a Proud Boys hat (laurel wreaths) the folks placed behind Trump are handpicked by his campaign aides. It was no accident. The racism is a feature not a bug. Vote. @realDonaldTrump

The hand sign—made with “the thumb and forefinger joined together in a circle, the remaining three fingers splayed out behind,” according to the SPLC—the man standing behind Trump was flashing has traditionally been used to indicate “OK.” But in recent years has emerged a symbol of white supremacy. The Anti-Defamation league has pointed to 2017 as the time when the meaning of the sign started to change to indicate white power. It is now in the group’s list of hate symbols.

It can be problematic to discuss the sign publicly because often that is exactly what those who flash it want. The SPLC has pointed out that many of those who flash the sign are doing it as part of a trolling effort to “trigger liberals” into making a big deal about a gesture (and writing articles about it, of course). But that isn’t always the case. At least according to ADL’s telling, by last year, “at least some white supremacists seem to have abandoned the ironic or satiric intent behind the original trolling campaign and used the symbol as a sincere expression of white supremacy.”

The hand sign has been the source of much controversy in the past. After some West Point cadets and Naval Academy midshipmen flashed the sign during a broadcast of the annual Army-Navy football game last year that Trump attended, an investigation was launched. In the end, investigators concluded those involved were “participating in a sophomoric game” and there was “no evidence of racist intent.” The game in question is commonly known as the “circle game” and involves a person making the gesture and getting another person to look at it. Sometimes, the person who looks at the circle can be punched in the arm.