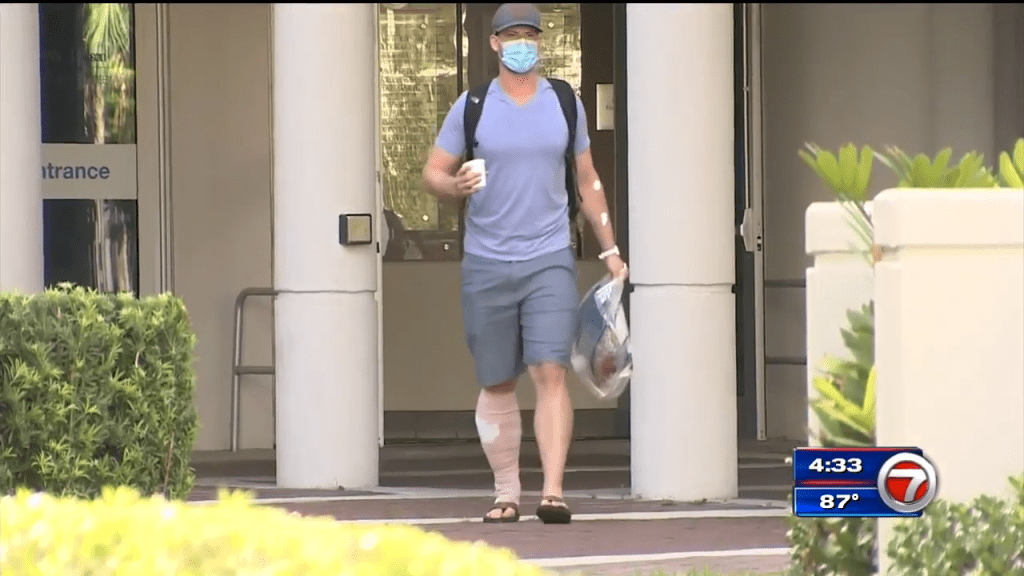 MIAMI BEACH, FLA. (WSVN) – A man who was bitten by a shark while swimming off Miami Beach has been released from the hospital.

“I was probably up to [my thigh] in the water, and it just felt like something punched my leg really hard,” he said. “It was the kind of force that would normally knock me over, but it didn’t. I was hoping it wasn’t a shark, but I knew it was a possibility. My leg, something didn’t feel right. It didn’t feel like I got bit, but it didn’t feel normal either.”

Bowden added he went into surgery, and his main injuries included some torn muscles. He said he was bodysurfing when he was bitten.

“There’s a big gash out of my leg,” Bowden said. “It was mostly like fat and torn muscle.”

Carolyn Lloyd returned to the beach on Thursday, one day after she witnessed Bowden getting bit by a blacktip shark near 10th Street, according to city officials.

“I just saw a lady coming around me, not running off the beach, screaming,” she said. “I had just gotten out of the water myself, and she was just screaming that a man got bit by a shark. He was laying on the beach over by the lifeguard station, and his leg was elevated. They were wrapping his calf in gauze, and they just kind of kept wrapping because it kept bleeding through and kind of dripping down his leg.”

Cellphone video captured the immediate aftermath of the incident, when Miami Beach Ocean Rescue crews could be seen tending to Bowden’s wounds.

“You could see after when they were taking care of him, we were all watching the water, looking to see what we could see, and you could definitely see a whole school of fish as the water would swell off and fish were swimming around,” Lloyd said. “You could see the fish kind of going back and forth.”

City officials said Bowden was rushed to the hospital as a trauma alert, where his massive gash was treated and stitched up.

Shortly after the incident, lifeguards raised red flags at their stations to signal danger in the water. A day after the bite, the red flags remain visible.

Barry Lloyd, who is visiting from Charlotte, North Carolina, said after seeing the video of the man being treated for his injuries, he will not go into the water to swim.

However, others, like Merle Liivang, said the water is safe as long as people are aware of their surroundings.

“When you see a school of fish, just don’t keep going with the fish,” Liivang, a professional swimmer, said. “Just slightly turn and move yourself from the school of fish because after small fish comes a big fish.”

Bowden said he saw the fish swimming around him moments before he was bitten.

“Luckily, it didn’t hurt. It didn’t hurt at all,” he said. “I’ve heard shark teeth are like surgeon’s scalpel blades. They’re just so sharp, so I think it’s a mix of that and adrenaline. I didn’t feel any pain.”

When asked if he would return to the water any time soon, he said he would take a break from swimming.