A Nigerian man has taken to social media to recount how an iron protector on the roof prevented robbers from gaining access into his office and carting away his valuables.

The man who is popularly known as @SonofJabez on Twitter, stated revealed that robbers visited his office, but couldn’t gain access because of the iron protector.

Sharing photos of the ceiling which was already tampered with by the robbers, urged Nigerians to help him thank God.

“So robbers visited my office where I do my business, but I thank God for wisdom, they couldn’t enter because of the protector on the ceiling.. Help me thank God”. 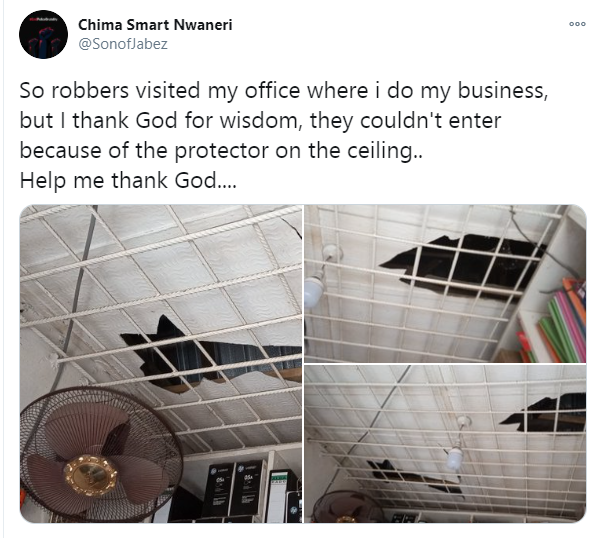 In other news, Osun State governor, Gboyega Oyetola has given looters 72 hours ultimatum to return all looted properties to designated authorities.

The Governor has instructed looters to return all looted items within 72 hours to security agencies, traditional rulers, local government chairmen or community leaders close to them.

Oyetola gave this announcement while speaking to the media during an assessment tour of some properties which were vandalized on Sunday October 25th.

He stated that of the suspected hoodlums fail to return all stolen items, they would be tracked and brought to justice. while those who heeds to the warning and returns it before deadline would be forgiven.