Mars is about to get a new stream of weather reports, once NASA’s Perseverance rover touches down on Feb. 18, 2021. As it scours Jezero Crater for signs of ancient microbial life, Perseverance will collect the first planetary samples for return to Earth by a future mission. But the rover will also provide key atmospheric data that will help enable future astronauts to the Red Planet to survive in a world with no breathable oxygen, freezing temperatures, planet wide dust storms, and intense radiation from the Sun.

The instrument behind the weather data is called MEDA – short for the Mars Environmental Dynamics Analyzer. Part of its goal is to gather the basics: temperature, wind speed and direction, pressure, and relative humidity. Models of the temperature at Perseverance’s landing site range from an average of minus 126 degrees Fahrenheit (minus 88 degrees Celsius) at night to about minus 9 degrees Fahrenheit (minus 23 degrees Celsius) in the afternoon.

Together with weather instruments aboard NASA’s Curiosity rover and InSight lander, the three spacecraft will create “the first meteorological network on another planet,” said Jose Antonio Rodriguez-Manfredi, MEDA principal investigator with the Centro de Astrobiología (CAB) at the Instituto Nacional de Tecnica Aeroespacial in Madrid, Spain. 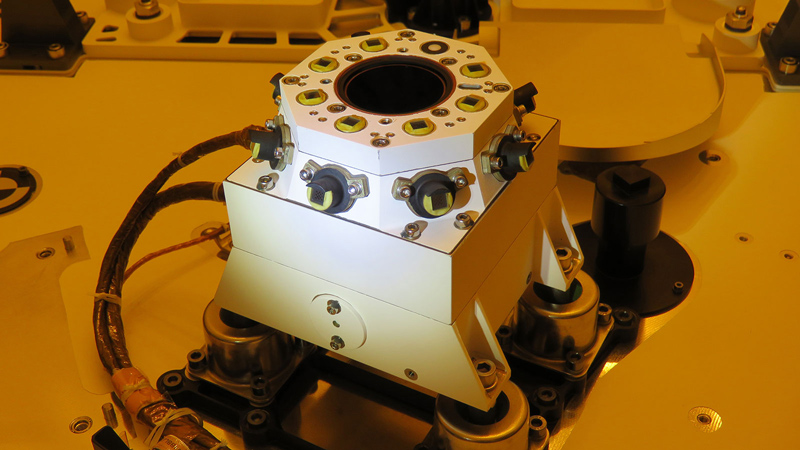 But a key difference between MEDA and its predecessors is that it will also measure the amount, shape, and size of dust particles in the Martian atmosphere. Dust is a big consideration for any surface mission on Mars. It gets all over everything, including spacecraft and any solar panels they may have. It also drives chemical processes both on the surface and in the atmosphere, and it affects temperature and weather. The Perseverance team wants to learn more about these interactions; doing so will help the team planning operations for the Ingenuity Mars helicopter as well.

“Understanding Martian dust is very important for this mission,” said Rodriguez-Manfredi. “Those fine grains of dust lift off the surface and cover the entire planet. We don’t know how Martian winds and changes in temperature are able to cause those global dust storms, but this will be important information for future missions.”

While those storms don’t blow with the force you see in movies (Mars’ atmosphere is too thin for that), they can create a thick blanket of dust. A global dust storm in the summer of 2018 ended the mission of NASA’s most seasoned rover, the solar-powered Opportunity, after almost 15 years of operations.

Even on placid days, dust on Mars is pervasive – and invasive.

MEDA will be able to measure the details of the diurnal dust cycle: “We know that the atmosphere essentially stirs up the dust at noon. Then at nighttime, when the temperatures go down, the atmosphere stabilizes and there’s less dust,” said Manuel de la Torre Juarez, MEDA’s deputy principal investigator with NASA’s Jet Propulsion Laboratory in Southern California. “We want to know more because as our missions to Mars get bigger, dust considerations could also become more relevant.”

Apollo astronauts found lunar dust to be a general nuisance, getting into helmet rings, sticking to spacesuits, and affecting the spacesuits’ cooling systems. The Apollo missions on the Moon only lasted a few days. Human missions to Mars likely will be much longer, so new data about daily dust cycles will benefit mission planners as well as spacecraft and spacesuit designers.

Cold and Cloudy With a Lot of Radiation

Airborne dust even factors into the amount of solar radiation bombarding the Martian surface. On Earth, our atmosphere, along with our planet’s magnetic field, shields us from radiation. But there is no global magnetic field at Mars, and its atmosphere is just 1% the density of Earth’s. So measuring dust and radiation go hand in hand, especially for spacesuit design.

“Radiation is probably the most extreme condition for the astronauts,” said Rodriguez-Manfredi. “The suits protecting the astronauts from this radiation will be crucial.”

To that end, MEDA’s SkyCam will photograph and make videos of the sky and clouds while monitoring sky brightness in a variety of wavelengths to help us better understand the radiation environment on Mars.

The information will also benefit Perseverance’s search for past life. As on Earth, if life ever existed on Mars, it was likely based on organic molecules. Solar radiation can alter traces of that past life in rocks, and data from MEDA will help scientists understand those changes.

MEDA’s data will help another instrument on Perseverance: the Mars Oxygen In-Situ Resource Utilization Experiment (MOXIE). MOXIE will demonstrate a technology that future explorers might use to produce oxygen that can be used for rocket propellant and for breathing. For devices like MOXIE to succeed, mission planners will need more information on what they’re up against. “Are they getting a clean atmosphere?” said de la Torre Juarez. “Are they getting a dusty atmosphere? Is this dust going to end up essentially filling up the air filters or not? They may identify times of the day when it is better to run MOXIE, versus times when it is better not to run it.”

To take its measurements, MEDA will wake itself up each hour, day and night, whether Perseverance is roving or napping. That will create a nearly constant stream of information to help fill the gaps in our knowledge about the Martian atmosphere.

More About the Mission

A key science objective for Perseverance’s mission on Mars is astrobiology, including the search for signs of ancient microbial life. The rover will characterize the planet’s geology and past climate, pave the way for human exploration of the Red Planet, and be the first mission to collect and cache Martian rock and regolith (broken rock and dust).

Subsequent missions, currently under consideration by NASA in cooperation with the European Space Agency, would send spacecraft to Mars to collect these cached samples from the surface and return them to Earth for in-depth analysis.

The Mars 2020 mission is part of a larger program that includes missions to the Moon as a way to prepare for human exploration of the Red Planet. Charged with returning astronauts to the Moon by 2024, NASA will establish a sustained human presence on and around the Moon by 2028 through NASA’s Artemis lunar exploration plans.

JPL, which is managed for NASA by Caltech in Pasadena, California, built and manages operations of the Perseverance rover.

For more about Perseverance: