Michigan dam failures force 10,000 to evacuate and could leave one city under 9 feet of water – CBS News

Rapidly rising water overtook dams and forced the evacuation of about 10,000 people in central Michigan, where the governor said one downtown could be “under approximately 9 feet of water” by Wednesday. For the second time in less than 24 hours, families living along the Tittabawassee River and connected lakes in Midland County were ordered to leave home.

After completing an aerial tour of the impacted areas, Governor Gretchen Whitmer said at a press conference Wednesday: “What I can tell you is what you already know, you’ve seen from the pictures: It’s devastating.”

“Experts are describing this as a 500 year event. It’s going to have a major impact on this community and on our state for the time to come,” she said, adding that she will be “very aggressive” about receiving help from federal government. “I’ll have more to share on that soon,” she said.

President Trump is scheduled to arrive in the state on Thursday, Whitmer said.

Flooding is expected to continue until 8 p.m., according to the governor. “We do know that the water is continuing to rise, albeit at a slower pace, but that’s why we’ve got to continue to take this seriously,” she said.

“I feel like I’ve said this a lot over the last 10 weeks, but this is an event unlike anything we’ve seen before,” Whitmer said. “And we’ve got to continue to all work together. To observe best practices, do our part to help one another and to wear our masks and continue to try and social distance in this moment.”

The governor stressed that the state is still “in the midst of COVID-19,” noting that there are reported cases in 79 out of Michigan’s 83 counties.

“It’s hard to believe that we’re in midst of a 100 year crisis, a global pandemic, and that we’re also dealing with a flooding event that looks to be the worst in 500 years,” she said. “But you know what, here’s what I know: When the chips are down the people of Michigan are able to rise up. We’re tough, we’re smart and we care about each other.”

The National Weather Service on Tuesday evening urged anyone near the river to seek higher ground following “castastrophic dam failures” at the Edenville Dam, about 140 miles north of Detroit and the Sanford Dam, about seven miles downriver.

The Tittabawassee River rose another four feet by Wednesday morning, to 34.4 feet in Midland. According to the National Weather Service, the height has set a new record for the river, beating the previous record of 33.9 feet set during flooding in 1986. 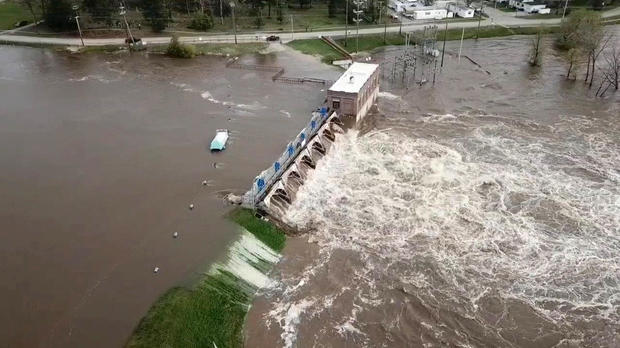 Water overruns Sanford Dam in Michigan on May 19, 2020, in this still frame obtained from social media video. TC VORTEX via Reuters

“In the next 12 to 15 hours, downtown Midland could be under approximately 9 feet of water,” the governor said. “We are anticipating an historic high water level.”

Whitmer declared a state of emergency for Midland County and urged residents threatened by the flooding to find a place to stay with friends or relatives or to seek out one of several shelters that opened across the county. She encouraged people to do their best to take precautions to prevent the spread of coronavirus, such as wearing a face covering and observing social distancing “to the best of your ability.”

“This is unlike anything we’ve seen in Midland County,” she said. “If you have a family member or loved one who lives in another part of the state, go there now.”

.@GovWhitmer declared a state of emergency for @midlandcountymi after the Edenville & Sanford Dams breached. “If you have not evacuated the area, do so now and get somewhere safe,” said Gov. Whitmer. “This is unlike anything we’ve seen in Midland County.” https://t.co/hMmN5QBdlQ https://t.co/oC3YzKv8Ls

Emergency responders went door-to-door early Tuesday morning warning residents living near the Edenville Dam of the rising water. Some residents were able to return home, only to be told to leave again following the dam’s breach several hours later.

“You gotta uproot and go amid everything else going on this year. This is pretty unreal,” resident Ryan Brethour told the station.

Another resident, Linda Chartrand, said she had to leave her Wixom Lake home. “Our whole life was in that house under water. We called the insurance company and they said they won’t cover anything,” Chartrand said. “We’re retired, this is all we have and now there’s no help whatsoever.”

Chartrand’s story is the same as that of many others in the area, including Becky Cook, who said she lost her dock and her boat hoist is now “floating down the river.”

The evacuations include the towns of Edenville, Sanford and parts of Midland, according to Selina Tisdale, spokeswoman for Midland County.

“We were back at home and starting to feel comfortable that things were calming down,” said Catherine Sias, who lives about 1 mile from the Edenville Dam and first left home early Tuesday morning. “All of a sudden we heard the fire truck sirens going north toward the dam.”

Sias, 45, said emergency alerts then began coming on her cell phone and people started calling to make sure she was safe. “While packing, there were tons of police and fire trucks going up and down the roads,” she added. “As far as I know, all of our neighbors got out.”

While driving along a jammed M-30, the state highway that’s the main road through Edenville and crosses the river north of town, Sias saw the rushing Tittabawassee River. “It was very dramatic, very fast and full of debris,” she said.

Dow Chemical has activated its emergency operations center and will be adjusting operations as a result of current flood stage conditions, spokeswoman Rachelle Schikorra said in an email. “Dow Michigan Operations is working with its tenants and Midland County officials and will continue to closely monitor the water levels on the Tittabawassee River,” Schikorra said.

In 2018, the Federal Energy Regulatory Commission, FERC, revoked the license of the company that operated the Edenville Dam, Boyce Hydro Power, due to non-compliance issues that included spillway capacity — essentially an overflow valve — and the inability to pass the most severe flood reasonably possible in the area.

In its revocation proposal, FERC wrote that Boyce had a “long history of non-compliance,” and listed numerous offenses. The commission’s “primary concern” however, was Boyce’s “longstanding failure to address the project’s inadequate spillway capacity.” According to FERC’s 2018 proposal, the spillway was only designed to handle “approximately 50 percent” of potential flooding.

“(Boyce) failed to increase the capacity of spillways to enable them to pass the probable maximum flood (PMF) as required by Regional Engineer directives,” FERC wrote. And further warned that “failure of the Edenville dam could result in the loss of human life and the destruction of property and infrastructure.”

In response to the revocation, Detroit News reports that Boyce Hydro wrote in a request that the “odds of a ‘probable maximum flood’ event occurring in the next 5 to 10 years is 5 to 10 in one million,” according to federal records. 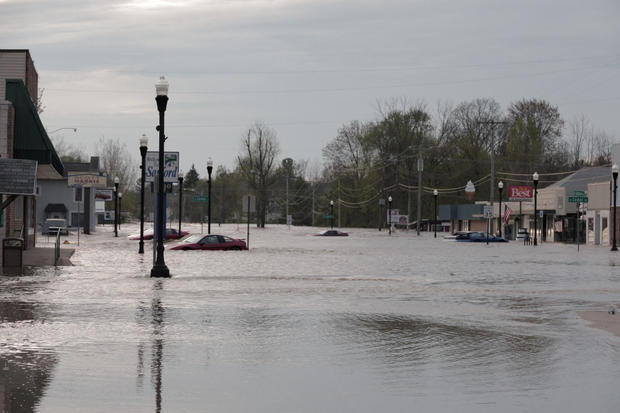 Floodwaters are seen along a street in downtown Sanford, Michigan, U.S. in this May 19, 2020 picture obtained from social media.  Social Media

There were 19 high hazard dams in unsatisfactory or poor condition in Michigan in 2018, ranking 20th among the 45 states and Puerto Rico for which The Associated Press obtained condition assessments.

Flood warnings in Michigan were issued following widespread rainfall of 4 to 7 inches since Sunday, according to the National Weather Service. Heavy runoff pushed rivers higher.

The heavy rains early in the week also caused flooding elsewhere in the region. In Chicago, water that flooded some areas downtown was receding Tuesday, but Larry Langford, a fire department spokesman, said he didn’t expect power to be restored at the iconic Willis Tower for days because the rains caused the building’s subbasements to fill with as much as 25 feet of water. The building was closed to tenants and visitors.