An annual infection that health officials look out for every year, the mosquito-borne illness typically doesn’t result in any symptoms or illness in humans.

However, in rare cases the result can be more severe.

“It only takes one bite from an infected mosquito to cause a severe illness, so take extra care during peak mosquito-biting hours, which are dusk and dawn for the mosquitoes that transmit West Nile virus and Eastern Equine encephalitis virus.” 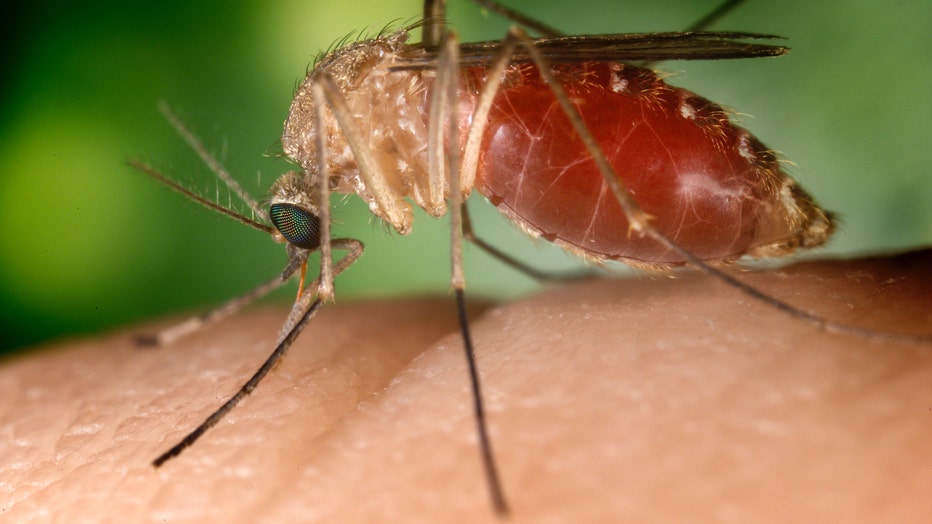 Known as a vector for the West Nile virus, this Culex quinquefasciatus mosquito has landed on a human finger and is biting the affected person’s skin, 2003. Image courtesy CDC/Jim Gathany. (Photo via Smith Collection/Gado/Getty Images).

EEE, or Eastern Equine encephalitis, along with West Nile are two seasonal diseases that mosquito breeds in Michigan carry. Infections in animals and people typically get reported in the fall.

Last year was a relatively-light season for West Nile infections. Only 12 cases and two deaths were reported in Michigan. However, Michigan also reported its worst outbreak of EEE last year when six people died. It’s most commonly found in horses. The presence of COVID-19 in 2020 has amplified concerns among health experts about transmissible diseases due to the coronavirus’s ability to exacerbate other symptoms people are experiencing.

“Whether you’re talking about West Nile, EEE or any other mosquito-borne disease, people and animal owners should take every precaution necessary to prevent infection,” said State Veterinarian Nora Wineland, DVM. “There is a lot happening in people’s lives right now, but we can’t let our guard down. I strongly urge animal owners to work with their veterinarian to make sure all their animals are vaccinated appropriately.”

Symptoms of West Nile usually show within three to 15 days of exposure. One in five will will exhibit mild illness with a fever, which include:

About one in 150 will develop severe symptoms from West Nile, which includes: