A Portland protester was filmed running with their legs on fire after a Molotov cocktail was thrown in their direction.

A large number protesters had gathered in the city on Saturday for the 100th straight night of protests since the killing of George Floyd.

Videos posted on social media showed a massive crowd of people in the street shortly before Molotov cocktails were thrown into the air.

In one clip posted on Twitter by Mike Baker, a correspondent for The New York Times, a crowd of protesters are seen dispersing quickly as a Molotov cocktail lands in the street and quickly ignites a large fire.

One protester can be seen running from the area with their legs on fire and appearing to roll over on the ground in a bid to put the flames out.

“You can see the Portland protester running around with their legs on fire at the beginning of this video,” Baker wrote alongside the clip.

Portland Police shared Baker’s clip, saying that at least one person had been injured.

Fire bombs were thrown at officers, injuring at least one community member. Police are trying to restore peace and order for the safety of this neighborhood. https://t.co/V3UOCR6Bc4

“Fire bombs were thrown at officers, injuring at least one community member. Police are trying to restore peace and order for the safety of this neighborhood,” the department tweeted.

Baker tweeted that the crowds of protesters were “split up and marching through the streets for a while” but later reunited. Later, police arrived and made “lots of arrests,” Baker added.

Police had earlier said the march near Ventura Park was not permitted, before later declaring a riot.

People were “engaging in tumultuous and violent conduct thereby intentionally or recklessly creating a grave risk of causing public alarm,” police said on Twitter. “This is a riot.”

They added in another tweet: “Portland Police are making repeated loudspeaker announcements ordering people to disperse and stop committing crimes or risk use of force the use of crowd control munitions including, but not limited to, tear gas and impact weapons and the possibility of arrest.”

Nightly demonstrations against police brutality and racial injustice started in Portland after the police killing of Floyd, a Black man, in Minneapolis in late May and have continued for 100 straight days.

A majority of the protests have seen some sort of vandalism, fires, or acts of violence, like projectiles being thrown at police. According to Portland Police, more than a quarter of the demonstrations have escalated into rioting since May 29. 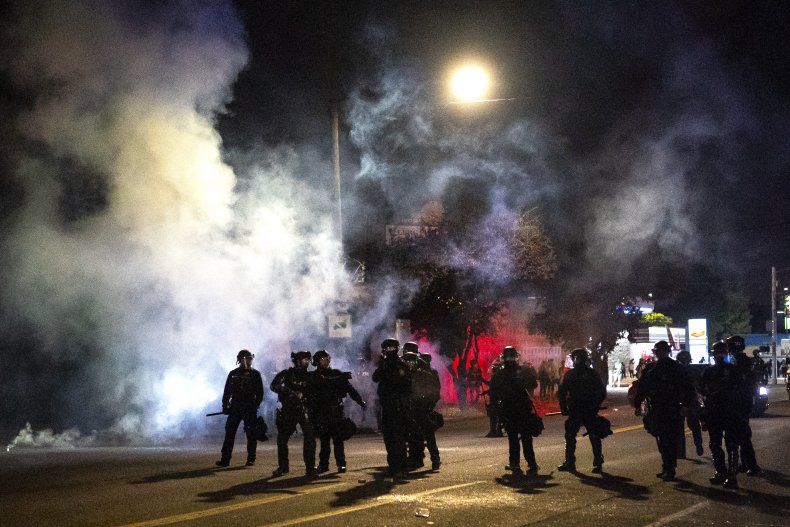 Portland police officers walk through smoke while dispersing a protest against racial injustice and police brutality early in the morning on September 5 in Portland, Oregon. Nathan Howard/Getty Images
Share this...