Motorola razr vs. Samsung Galaxy Z Flip: The battle of the foldable phones 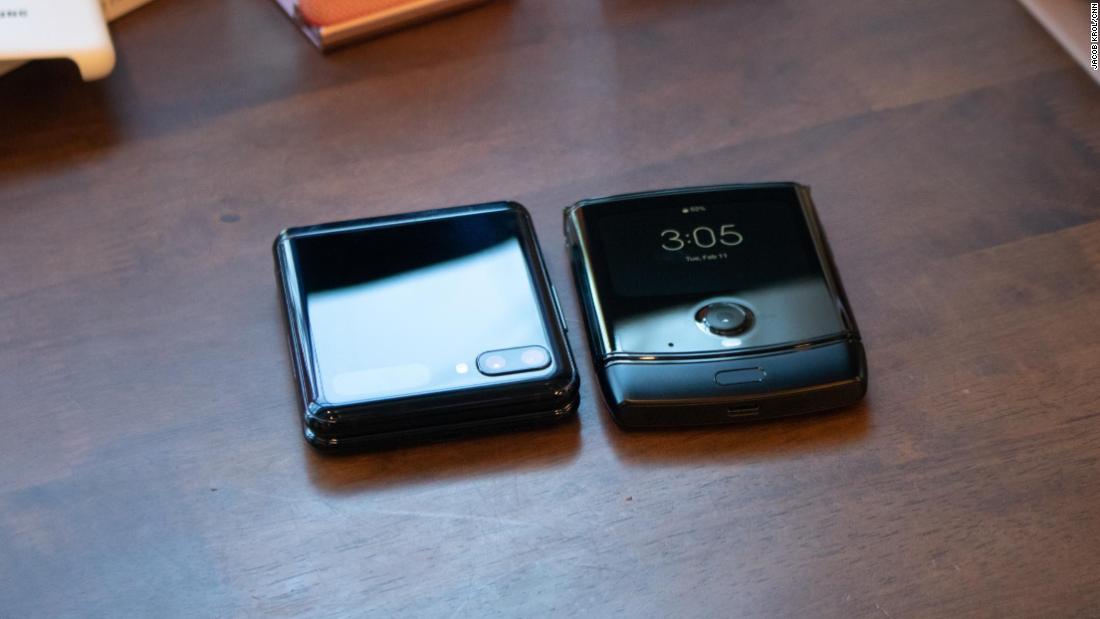 Flip phones were a dying breed, but with this month’s launch of not one, but two flip phones, both with foldable displays, it appears they’re making a comeback.

But these aren’t the same flip phones your father used, with a clamshell design that, when opened, would reveal a display on top and keypad on the bottom. Instead, the Motorola razr and Galaxy Z Flip have foldable displays that span the entire length of the phone when opened.

Remarkably, both phones have screens that bend and fold without breaking, similar to the Galaxy Fold, released by Samsung last year. Instead of opening like a book, as the Fold does, the razr and Z Flip open vertically. You can even close the phone to hang up a phone call. Talk about nostalgia

It’s fascinating tech, but it’s also new tech. It’s relatively untested on a wide scale, and it’s likely too expensive for most consumers.

Nonetheless, the Razr and Z Flip are giving us a glimpse into the future of smartphones. Just how well do the first foldable flip phones of 2020 stack up? Let’s take a look.

The razr launched on Feb. 6 after a slight delay, while the Z Flip will start shipping Feb. 14, just a few days after it was announced.

The razr is a Verizon Wireless exclusive, while the Z Flip is available through AT&T, Sprint or unlocked for use on any carrier.

How do the specs compare?

Both the Z Flip and razr rely on components that we’d expect to find in a 2019 flagship phone, not in 2020 releases.

The Motorola razr uses a mid-tier Qualcomm Snapdragon 710 processor, has 128GB of storage, 6GB of memory and a 2,510 milliamp-hour battery.

The Galaxy Z Flip uses the high-end Qualcomm Snapdragon 855+ processor, has 256GB of storage, 8GB of memory and a 3,300 milliamp-hour battery.

In comparison, the recently announced Galaxy S20 lineup comes with the latest Snapdragon 865 processor and at least 12GB of memory.

The razr runs Android 9.0 Pie, which was released in 2018. The Z Flip runs Android 10, the latest version available from Google.

Despite year-old specs, either phone should have zero issues running their respective versions of Android and any of the apps you rely on daily. It’s just worth noting the older hardware when you’re paying nearly $1,500 for a phone.

As noted in our review of the razr, battery life is a concern, with enough power to make it through a 10-hour day. The Z Flip has a larger battery, but that doesn’t always mean improved battery life.

But, in reality, you’re not paying that much because of the processor or the memory in either phone. The high-end price tag is due to the foldable screen.

Both devices have a smaller display on the front for viewing alerts and notifications, or using it as a viewfinder to take a selfie. The razr’s front display is 2.7 inches and better suited for being used as a viewfinder. The Z Flip’s front display is 1.1 inches, but its bar-like shape is narrow and better suited for reading text, not for taking selfies.

As for front-facing cameras, the razr has a 5-megapixel camera next to the earpiece when the phone is opened. The Z Flip has a 10-megapixel camera that’s part of the hole-punch display, with a single cutout in the screen similar to what we saw with the Galaxy Note 10 and 10+.

If you go line by line down the spec sheet, the Z Flip wins in nearly every category. The front display of the razr is bigger and more practical, but outside of that, the Z Flip is arguably the most capable of the two.

What about build quality?

There are two things that matter more than anything when it comes to a foldable phone: The hinge and the display.

It’s too early to say how the Galaxy Z Flip will stand up over time. It just launched, and we haven’t had a chance to spend a significant amount of time with it.

We’ve spent time with the razr, and so far, the hinge feels solid and reliable.

The durability of the displays also remain a question mark, but the fact that Samsung uses ultra-thin glass instead of a plastic layer on the display (as the razr does) bodes well for its longevity.

In other words: The Z Flip should have a better build quality when it comes to the display, and lessons learned from the hinge on the Galaxy Fold should give it an advantage, but without long term testing with both devices, it’s just too early to make a definitive call.

Which one should you buy?

If you’re strongly considering buying one of the foldable flip phones, I’d suggest waiting until reviewers and early adopters put the Z Flip through its paces.

On paper, the Z Flip appears to be the one to buy. It’s more affordable, better spec’d and has a more robust display and hinge. But, again, until people use it in the real world, we don’t know how well the phone will stand up to everyday use. Remember, Samsung was days away from launching the Galaxy Fold before reviews discovered issues and delayed the release.

Ultimately, the deciding factor may be as simple as whether or not you’re a Verizon Wireless user. If you are, you have the choice of an unlocked Z Flip or a razr. If you’re not a Verizon user, then you’re left with the Z Flip (or switching carriers, which can be a hassle).

Note: The prices above reflect the retailer’s listed price at the time of publication.

We all want our PlayStation 4 consoles to track all our statistics,…
Share this...

Quench your thirst for water — and savings — with this Gold…