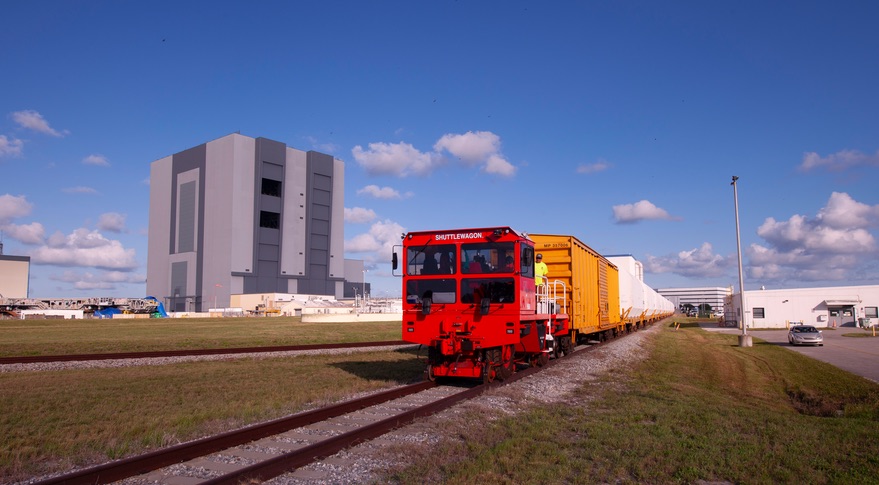 A train carrying the booster segements for the first SLS rocket arrives at the Kennedy Space Center June 15 to begin preparations for that launch, now expected in late 2021. Credit: NASA/Kevin O’Connell

WASHINGTON — NASA has taken another step in its efforts to establish a long-term production line for the Space Launch System, although it remains uncertain what cost savings, if any, those contracts will provide.

NASA announced June 29 that it has signed a letter contract with Northrop Grumman for solid rocket boosters used by the SLS. The contract, valued at $49.5 million, will allow the company to begin buying long-lead items needed for boosters that would be used on the fourth through ninth flights of the SLS. The company is already under contract for the boosters for the Artemis 1, 2 and 3 missions of the SLS through 2024.

The letter contract serves as a precursor to a long-term contract for the boosters for those six future SLS missions. That contract, which NASA said it expects to finalize in the next year, would run through the end of 2030.

“This initial step ensures that NASA can build the boosters needed for future Space Launch System rockets that will be needed for the Artemis missions to explore the moon,” said John Honeycutt, NASA SLS program manager, in an agency statement. “The letter contract allows us to buy long-lead materials in time for manufacturing boosters for the fourth flight.”

The SLS uses twin five-segment solid rocket boosters based on the four-segment boosters flown on shuttle missions. Northrop Grumman recently shipped the ten segments needed for the boosters on the Artemis 1 mission from a company storage facility in Utah to the Kennedy Space Center for stacking and integration.

The letter contract is the latest in a series of steps by NASA to set up long-term production of a rocket that has yet to make its first launch. In October 2019, NASA announced it had started negotiations with Boeing on a contract for up to 10 core stages of the rocket. In May, NASA awarded a contract to Aerojet Rocketdyne to produce 18 RS-25 engines used on that core stage, a deal worth $1.79 billion.

NASA has argued that long-term contracts will reduce the costs of individual SLS vehicles. “If you buy one SLS rocket, the price is really high. If you buy two, the price goes down significantly, and if you buy the three it keeps going down,” NASA Administrator Jim Bridenstine said at a December 2019 event at the Michoud Assembly Facility marking completion of the SLS core stage for Artemis 1.

The exact size of that cost reduction remains unknown. Bridenstine suggested last year that the goal is to reduce the price of a single SLS by about half. Aerojet Rocketdyne executives said in May that their new RS-25 production contract will phase in a cost reduction of 30% over the duration of the contract, and that the company is studying ways to get to a 50% cost reduction when compared to the Space Shuttle Main Engine.

The latest contract announcement did not include an update on when the long-delayed SLS will finally launch. Testing of the SLS core stage, including a “Green Run” static-fire test, has been slowed by factors beyond NASA’s control, including the coronavirus pandemic that closed the Stennis Space Center in Mississippi for two months and, more recently, a tropical storm that suspended work for about a week.

At an advisory committee meeting in May, Tom Whitmeyer, NASA assistant deputy associate administrator, said the Artemis 1 launch like will take place “towards the end of next year.” The 2010 NASA authorization act that directed NASA to develop the SLS called for it to be in service by the end of 2016.