Space probes are to get artificial intelligence and autonomy while they conduct a search for alien … [+] life in the Solar System.

Space probes send back too much data. In fact, the science instruments that study the geochemistry of planetary bodies—and search for alien life—generate increasingly large amounts of data.

It’s time-consuming, expensive to send across space, and the sheer volume overwhelms astronomers. So why not bake-in artificial intelligence to space probes and allow them to decide what data to bother humans with?

In short, get them to phone home only when they’ve found something they think is really important.

That’s the core theme of a presentation this week by two NASA Goddard Space Flight Center scientists at the Goldschmidt Geochemistry conference, which is being held virtually from June 21-26, 2020.

It could be a “visionary step in space exploration” according to one of the researchers.

The intention is to install these new intelligent systems in space probes—starting with the ExoMars mission in 2022—that can identify geochemical signatures of life from rock samples before sending back to Earth only the pertinent data. 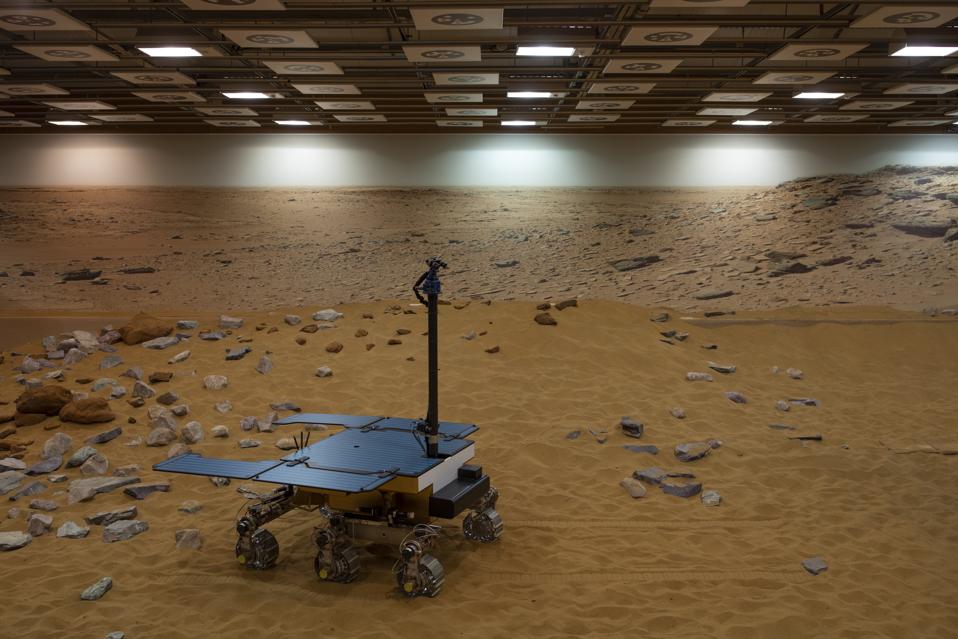 A working prototype of the ExoMars rover at the Airbus Defense Space facility on February 7, 2019 in … [+] Stevenage, England. The craft has been named after DNA pioneer Rosalind Franklin, chosen from a shortlist of over 35,000 public submissions and unveiled by UK Science Minister Chris Skidmore and UK ESA Astronaut Tim Peake today. The rover, which is still under construction, is due to touch down on the surface of Mars in 2021 after a journey of nine months. (Photo by Dan Kitwood/Getty Images)

Allowing these intelligent systems to choose both what to analyse and what to tell us back on Earth will, say the scientists, overcome the severe limits on how information is transmitted over huge distances in space.

“Smart space probes” could be of fundamental importance as the already vast distances increase as the search for life on spreads to more distant planets.

From a rover on Mars the data takes 20 minutes to send home; from Pluto it’s over four hours.

It’s also really expensive to send data across space. “Data from a rover on Mars can cost as much as 100,000 times as much as data on your cell phone, so we need to make those bits as scientifically valuable as possible,” said Eric Lyness, software lead in the Planetary Environments Lab at NASA Goddard Space Flight Center (GSFC).

That high cost means scientists can’t run as many experiments or get rovers to analyse as many rock samples as they would like.

“By using AI to do an initial analysis of the data after it is collected, but before it is sent back to Earth, NASA can optimise what we receive, which greatly increases the scientific value of space missions,” said Lyness.

Lyness and colleague Victoria Da Poian have trained AI systems to analyse hundreds of rock samples using data from the Mars Organic Molecule Analyzer (MOMA), an instrument inside the ExoMars Rosalind Franklin Rover, which will land on Mars in 2023.

The mission was originally supposed to launch in just a few weeks, but had to be delayed. 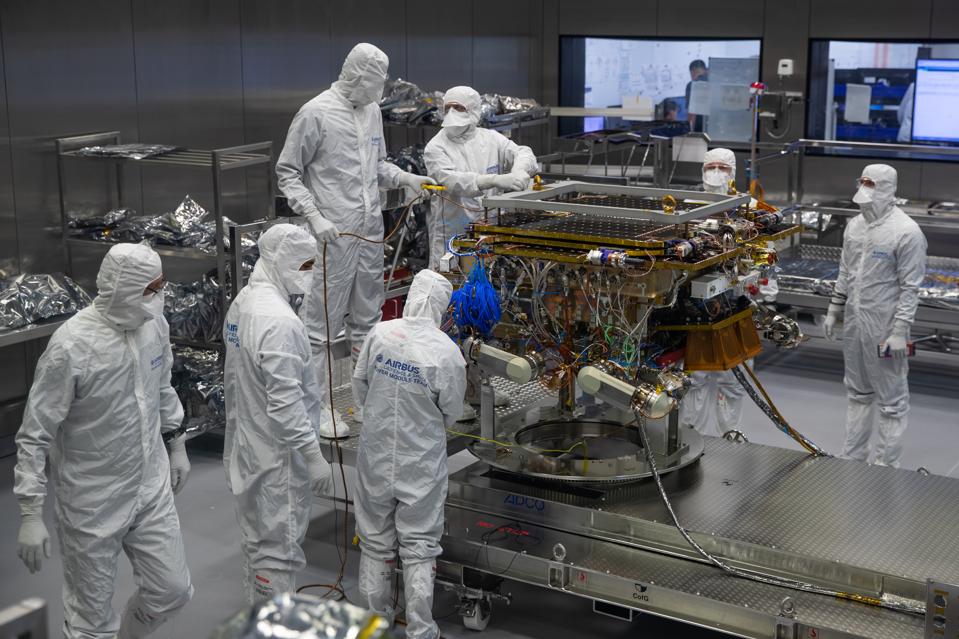 The European Space Agency’s ExoMars rover is being prepared to leave Airbus in Stevenage. The … [+] ExoMars 2020 rover Rosalind Franklin is EuropeÕs first planetary rover it will search for signs of past or present life on Mars. (Photo by Aaron Chown/PA Images via Getty Images)

Capable of identifying organic molecules, MOMA will search for past or present life on the Martian surface and subsurface. Early experiments indicate that the AI is as much as 94% accurate.

“We need to prioritize the volume of data we send back to Earth, but we also need to ensure that in doing that we don’t throw out vital information,” said Da Poian, who with Lyness has been developing the smart algorithms.

Given MOMA’s ambitious mission, this AI could prove critical. “Samples will only remain in the rover for at most a few weeks before the rover dumps the sample and moves to a new place to drill,” said Lyness. “So if we need to retest a sample, we need to do it quickly, sometimes within 24 hours.”

Such autonomous systems will be even more important for possible future missions to other potential hotspots for life elsewhere in the Solar System. “As we move to explore the moons of Jupiter such as Europa, and of Saturn such as Enceladus and Titan, we will need real-time decisions to be made onsite,” said Lyness. “With these moons it can take 5 to 7 hours for a signal from Earth to reach the instruments, so this will not be like controlling a drone, with an instant response.”

The system will cross-reference with a database, essentially giving scientists back on Earth a message that reads something like:

“I’m 91% confident that this Martian rock sample corresponds to a real world sample and I’m 87% sure it is phospholipids, similar to a sample tested on July 24th, 2018, and here is what that data looked like”.

So all this is really doing is helping scientists to prioritize what’s investigated further, and help them make decisions more quickly, so they don’t miss something really important.

“One of the main challenges for planetary missions is getting the data back to Earth—it costs both time and money,” said Dr. Joel Davis, postdoctoral researcher in planetary geology at the Natural History Museum, London, and not connected to the research. “Given the finite lifespans of missions, scientists have to be very selective about the data they choose to bring back.”

“These results certainly seem promising; having greater autonomy onboard spacecraft is one way of ensuring the usefulness of the data returned.”