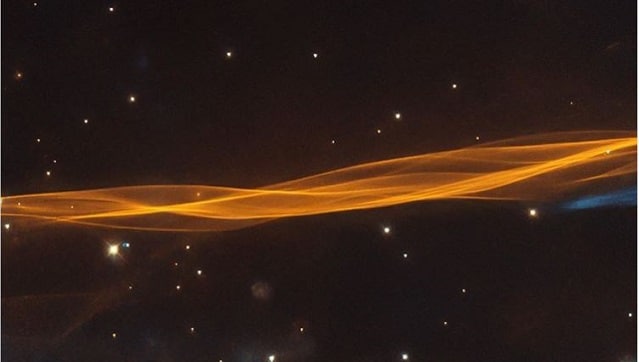 The National Aeronautics and Space Administration (NASA) has shared an image of “a small section of a Cygnus supernova blast wave,” that has taken the internet by storm. Comparing the imagery to that of magic, the space agency wrote that the image which appears as a delicate and light veil across the sky, reminds every one of the power of imagination.

Captured by the Hubble Space telescope, NASA states, “In reality, it’s a small section of a Cygnus supernova blast wave, located around 2,400 light-years away”.

According to NASA, the original supernova explosion blasted a dying star between 10,000 and 20,000 years ago. After which, the remnant has expanded 60 light-years from its center.

Hubble Space Telescope shared the same image on its Instagram and wrote that the shockwave from the massive explosion is still expanding at a rate of around 350 kilometres per second.

“The interaction of the ejected material and the low-density interstellar material swept up by the shockwave forms the veil-like structure seen in this image,” NASA Hubble said.

According to the NASA website, the name of the supernova remnant comes from its position in the northern constellation of Cygnus (the Swan). It covers an area 36 times larger than the full Moon.

A supernova is a powerful explosion of a star that is extremely bright. One type of such explosion is caused by the ‘last hurrah’ of a dying massive star.

The second type occurs when two stars orbit one another and at least one of those is an Earth-sized white dwarf. If one white dwarf collides with another or pulls too much matter from the nearby star, the white dwarf can explode.

As per astronomers, supernovas are not very common and about two or three of them occur each century in galaxies like our Milky Way.