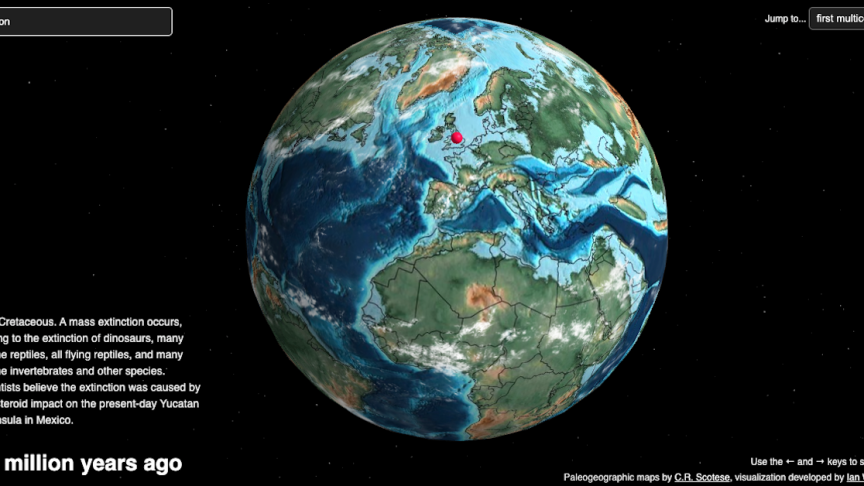 Want to know whether your hometown would have been submerged underwater millions of years ago? Want to know how close you live to some of the Earth’s most historic geological events? Now you can.

A California-based paleontologist has created an interactive map that allows people to see how far their hometowns have drifted over 750 million years of continental drift.

The designer of the map, Ian Webster, included a range of features, such as historical data that helps users to learn more about the historical periods of our planet.

RELATED: LARGEST EVER 3D MAP OF THE UNIVERSE FILLS IN HISTORY GAPS

Webster built his map as a web application that sits on top of another map that visualizes geological models by geologist and paleogeographer Christopher Scotese. The original map details plate tectonic development over the last 750 million years.

“The history of Earth is longer than we can conceive, and the current arrangement of plate tectonics and continents is an accident of time,” Webster explained to CNN. “It will be very different in the future, and Earth may outlast us all.”

Webster’s site also utilizes GPlates, a software that geologists use to visualize plate tectonic reconstructions. The interactive map lets users enter their exact location and anchor that location into plate tectonic models. Then, the users can see where their town or city location was hundreds of millions of years ago.

It’s fascinating to see how “flexible” the Earth’s landmass is over the course of millions of years. Pinpointing London in the United Kingdom, for example, will let you see that its exact location was submerged underwater for many millions of years.

The map was built to illustrate complex and interesting scientific data in an interactive and user-friendly manner so that it can be used by teachers, professors, and anyone interested in the Earth’s history, Webster explained. It is a fascinating look into the way our Earth has evolved since the time of the dinosaurs and beyond.

“It is meant to spark fascination and hopefully respect for the scientists that work every day to better understand our world and its past,” he told CNN. “It also contains fun surprises, for example how the US used to be split by a shallow sea, the Appalachians used to be very tall mountains comparable to the Himalayas, and that Florida used to be submerged.”

You can find the map here.