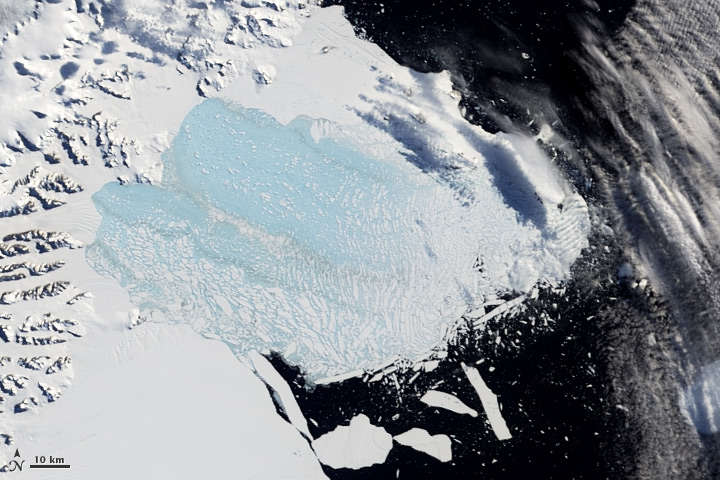 Enlarge / In 2002, the Larsen B ice shelf disintegrated in a matter of weeks.

28 with 22 posters participating, including story author

In 2016, a study found that adding a couple new processes to a model of the Antarctic ice sheets made them much more vulnerable to melt, greatly increasing global sea level rise—both this century and in the centuries to come. It was an alarming result, to be sure, but also a bit conjectural. The researchers didn’t have a way to assess how realistically the new processes were modeled, so they viewed their paper as raising a question deserving attention rather than providing an answer.

The new processes were the collapse of ice cliffs above a certain height (a theoretical constraint, but not something we’ve watched happen) and hydrofracturing. The latter is a propagation of a surface fracture in the ice clean through to the bottom of the ice sheet as the crack fills with water. Hydrofracturing is a known commodity—it was probably the dominant process in the sudden collapse of Antarctica’s Larsen B ice shelf in 2002. The question here, instead, is how vulnerable is the rest of Antarctica to this process?

A new study led by Ching-Yao Lai at Columbia University’s Lamont-Doherty Earth Observatory has tried to answer that question by mapping fractures and calculating where hydrofracturing should be possible.

The work focuses on ice shelves, which are the floating tongues of ice that exist where a glacier slides into the sea. In many places, ice shelves attach to the land along the sides of an embayment, providing some anchoring that slows their forward motion. This also slows the flow of the rest of the glacier on land—a critical function called “buttressing.” If a buttressing ice shelf breaks up, the glacier is more or less uncorked, and its flow into the sea will accelerate.

So to assess the relevance of hydrofracturing for future Antarctic ice loss, the researchers were looking for a combination of three things: the presence of fractures, the conditions that make fractures susceptible to hydrofracturing, and the buttressing area of ice shelves.

First up, they wanted to map fractures. Rather than laboring away for thousands of hours to find and mark all the fractures by hand, the researchers turned to a machine learning technique. After training the algorithm in a small area with hand-marked fractures, the researchers turned it loose on satellite imagery all around Antarctica, identifying nearly 32,000 of them.

To figure out whether fractures are vulnerable to hydrofracturing, the researchers turned to measurements and models of ice flow and temperature. Hydrofracturing only works if there’s enough tension in the ice perpendicular to the fracture. Otherwise, filling the fracture with water isn’t sufficient to force that fracture wider and deeper all the way to the bottom. It will just fill with water and sit there.

The vast majority of fractures turn out to be in stable conditions where surface meltwater flooding would not cause hydrofracturing. That does, however, still leave a significant number of unstable fractures.

Finally, the map of vulnerable fractures is compared to the map of ice shelves that buttress the land ice behind them. And here the stats are not comforting. Roughly 60 percent of the area of buttressing ice shelves around Antarctica should be vulnerable to hydrofracturing, the researchers estimate. And their fracture map shows that some are present in all these areas. 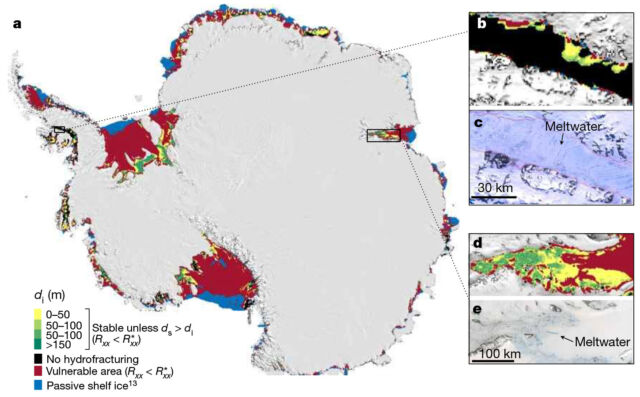 Enlarge / Areas of buttressing ice shelves that are vulnerable to hydrofracturing shown in red. Fractures in green and black areas should be stable; blue areas provide no buttressing. Boxes zoom in on two areas where surface meltwater is present today.

The recipe for hydrofracturing, of course, requires the “hydro” part—meltwater on the ice surface. That’s quite rare today.  Using a recent map of surface meltwater ponds on the East Antarctic Ice Sheet, which reaches lower (warmer) latitudes, the researchers find that only 0.6 percent of the ice shelf area there is both vulnerable and currently hosting meltwater. In the few notable areas with significant amounts of meltwater, fractures should be stable.

The problem is that projected warming of air temperatures could lead to much greater amounts of surface meltwater on the ice by the end of this century. And given the apparent vulnerability to hydrofracturing, that could mean more collapsed ice shelves like the Larsen B. There’s also a lot more land ice behind these vulnerable sites, with bigger stakes for sea level rise.

So far, the biggest problem for Antarctic ice has been warmer seawater eating away at the ice shelves from below. This study highlights an atmospheric method of attack that will have to be studied in great detail to better anticipate Antarctica’s response to climate change.