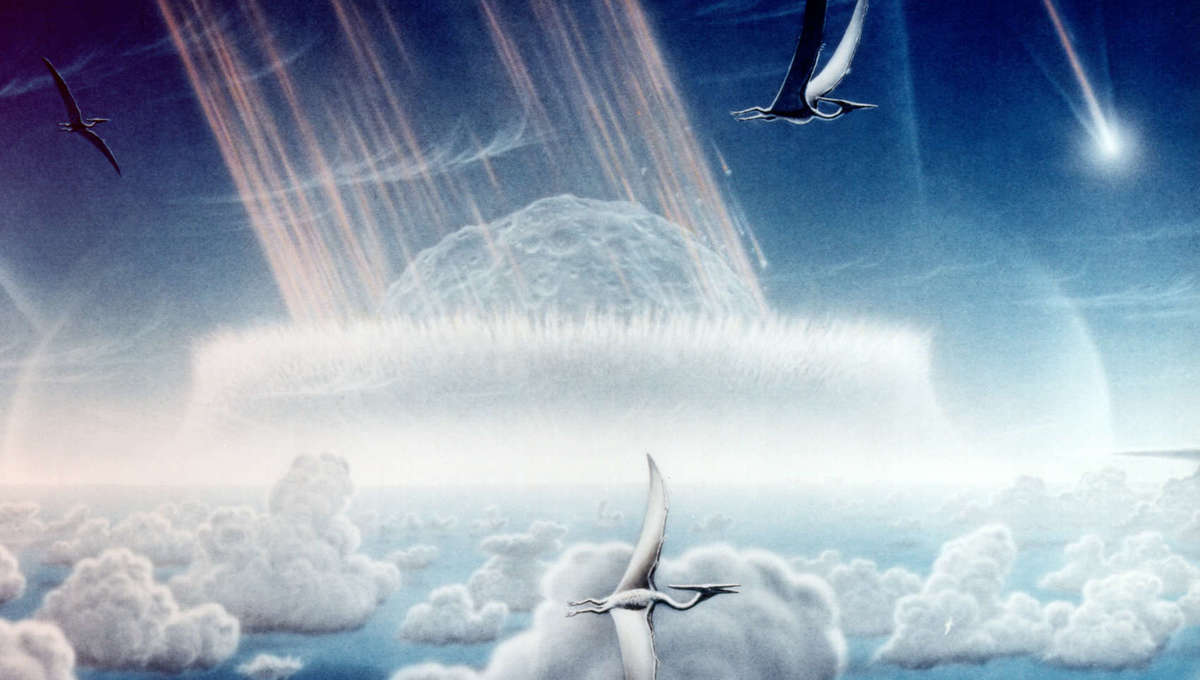 We know that a monster asteroid impact killed off the (non-avian) dinosaurs at the end of the Cretaceous Period. Sixty-six million years ago, a 10-kilometer wide space rock slammed into the Earth just off the coast of modern-day Yucatan, blasting a crater 150 kilometers wide and setting off a chain of catastrophic climate events that wiped out 75% of all species on the planet.

Over the past few years, though, evidence of another over-the-top disaster happening at the same time has piled up: A huge volcanic eruption event in India, creating what’s now called the Deccan Traps. This was not like a single volcano blowing its top; this was a series of enormous eruptions lasting for hundreds of thousands of years. By the time they subsided, 500,000 square kilometers over the area were buried 2 kilometers deep with igneous rock.

There’s now pretty good evidence that the Deccan eruptions were going on for a while before the asteroid impact, and shortly after the eruption volume increased substantially, likely due to the seismic waves from the asteroid impact opening up the valves underground, so to speak.

Because of the timing, some paleontologists suggested the two crises worked together, giving the dinosaurs a one-two punch from which they couldn’t recover.

However, a firm conclusion has been difficult to draw. And now a new paper has been published arguing against the co-dinosaur-doomsday idea. The scientists claim that the impact did all the dirty work, and the Deccan Traps, though apocalyptic in scale, may have only helped a little bit. Not only that, but they also suggest that, bizarrely, the eruptions may have helped Earth’s life recover from the impact!

They used models of climatic and ecological damage done by impacts and volcanism. The impact had an immediate and direct effect on dinosaurs, killing quite a few regionally, as well as globally as ejected material from the crater rained down all over the planet. But the asteroid also hit in a region where there were lots of particularly bad minerals (carbonates and sulfates), and it aerosolized them — meaning vaporized them into small enough particles that they could remain suspended in the air for a long time. This stuff is dark, so it blocked sunlight from reaching the ground, leading to prolonged periods of global cooling. This reduced the viability of the dinosaurs’ habitats, leading to more deaths later and the global mass extinction.

Video of Visiting the crematorium of the dinosaurs

But what of the Deccan Traps? The scientists find that there was an immediate effect from them as well, inserting sulfates into the atmosphere. But even though the eruptions lasted for a very long time, the amount of sunlight-absorbing material they put into the air was small compared to the impact — too small on their own to create a global extinction event.

However, the eruptions also blasted a lot of carbon dioxide into the air, which is a greenhouse gas. This has the effect of warming the Earth. At first the impact cooling dominated, but over time that would ease up on its own as the aerosols rained out of the atmosphere. But the volcanic CO2 emissions would have helped, accelerating the warming, providing more clement habitats for species to fill.

This does jibe with earlier studies which show that the temperatures recovered relatively rapidly after the impact.

It’s been interesting reading these papers coming out about the effects of the impact and the Traps, seeing scientists zero in on the effects of each. The idea of an impact extinction was controversial at first, but over time we’ve learned about the damage impacts can do. Then the scientists started thinking about how the Deccan Traps fit into the picture, and there have been reports going back and forth on whether they were part of the extinction event or had little to do with it. This newest study shows they probably didn’t have a hand in the extinction but may have played a role in mitigating the effects later.

I love this. I know it sounds like scientists can’t make up their minds, but that’s not the case at all. What’s happened is that the broad strokes were figured out first, and then more work reveals more subtle effects, so it can be hard to nail down what they are and what they do. But every bit of research published gives us a little more info, a slightly bigger view of the picture, and eventually (hopefully) the pieces all fit together to create a greater understanding of events.

It also shows how resilient life is, as well as our planet itself. A 10-kilometer asteroid is a helluva cannonball, and while it did change things severely and globally, Earth recovered. Life didn’t get completely wiped out, and eventually found its way back.

There are lessons here, to be sure. I’m sure there’s one segment of our population that will take this the wrong way. Sure, all that CO2 that was shot into the air by the volcanism actually helped, but that happened over hundreds of thousands of years. We humans are currently injecting dozens of gigatons of carbon dioxide into our air every year, which is so rapid the Earth’s ecosphere doesn’t have time to adapt, so we’re making things vastly worse.

We’re looking more like the asteroid ourselves in this scenario. Nature likes to experiment with catastrophes, but that doesn’t mean that we have to.