An upcoming wedding in a Hasidic community in New York City’s Williamsburg neighborhood that had authorities worried as a potential superspreader during the pandemic will not proceed as planned, NY1 reported Sunday.

Earlier, the state and sheriff’s department of New York issued an order regarding the nuptials that were originally set to take place Monday and expected to attract 10,000 people. According to The New York Post, the wedding involves a grandchild of Zalman Leib Teitelbaum, grand rabbi of the Satmar sect.

The state’s order, which was served Friday evening to Congregation Yetev Lev D’Satmar, requires the Williamsburg wedding to be canceled or postponed. Otherwise, the event must be limited to only 50 people amid COVID concerns, which is the mandated limit throughout New York.

“We received a suggestion that that was happening, did an investigation, found that it was likely that it was true. There was a large wedding planned that would violate the gathering rules,” Governor Andrew Cuomo told a news conference, as per Times of Israel.

“You can get married. You just can’t get a thousand people at your wedding. You get the same results at the end of the day. It’s also cheaper!” he added.

On Sunday morning, following the state and sheriff department’s order, the Satmar Wedding Committee released a statement regarding the wedding. The committee noted that the large celebration will not host thousands of guests as rumored. Additionally, the event plans to follow COVID-19 guidelines in light of the pandemic.

“This wedding was designed differently, that the Chuppah celebration and meal should only be attended by a small circle of close family members. The rest of the community would only be able to participate for a short period of time to extend their wishes to the Grand Rebbe and his family. The greeting cue would have been controlled in accordance with the social distancing regulations. The proper arrangements were in place to achieve that,” said Chaim Jacobowitz, secretary of the Satmar Wedding Committee.

Jacobowitz continued: “The publicity will turn this wedding to a paparazzi and will draw spectators that may make it impossible to control the crowds to comply with social distancing. It will also deter from the celebratory and spiritual atmosphere fit for such an affair. Hence, we decided that the wedding will not be held as planned, and will only be attended by close family members.”

Despite the fact that the wedding venues are not in any of the coronavirus mini-cluster zones, state and city officials were concerned about the event’s superspreader potential. The ceremony was expected to take place indoors, but people may congregate outside the venue. 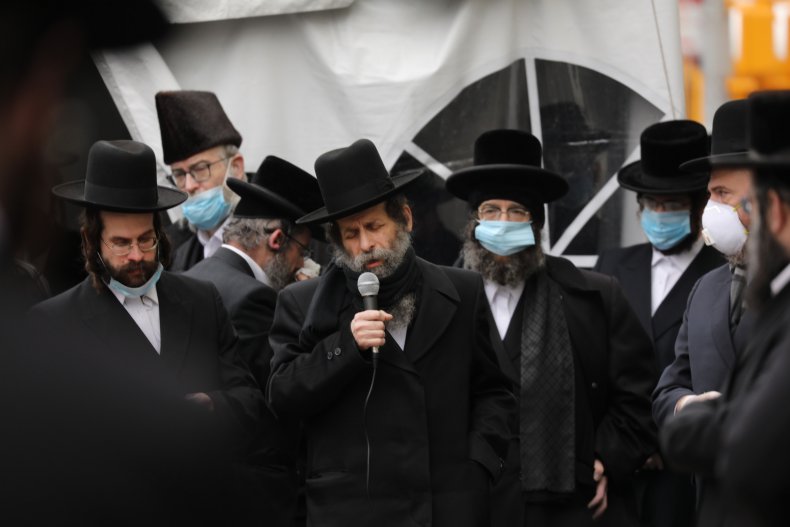 A man speaks as hundreds of members of the Orthodox Jewish community wearing face masks attend the funeral for a rabbi who died from the coronavirus in the Borough Park neighborhood which has seen an upsurge of (COVID-19) patients during the pandemic on April 05, 2020 in the Brooklyn Borough of New York City. The state of New York is banning a wedding set to draw 10,000 people on Monday in Williamsburg. Spencer Platt/Getty

“It was outside of the target red or orange or yellow cluster zone, but the information that our investigation revealed was that upwards of 10,000 individuals were planning to attend,” Beth Garvey, special counsel and senior advisor to the governor, revealed at the time via CBS New York.

Cuomo said that there was a spike in cases in Rockland County red zones days after the gathering. On Thursday, there was an 11.26 percent positivity rate in coronavirus testing, up almost three percent from the day before.

“Some of the complexity of the enforcement here, especially with members of the Orthodox community, they never comply with the rules,” the governor said at the time.

Additionally, in Brooklyn red zones, the positivity rate from coronavirus testing on Thursday was 5.47 percent.

Newsweek reached out to the governor’s office for additional comment Sunday morning.

Updated 11:55 AM ET: This article has been updated to include a statement from the Satmar Wedding Committee.