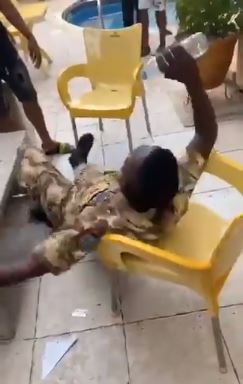 In the viral video, the soldier was seen shaking uncontrollably and screaming “La ilaha illallah”, which means there is no God but Allah.

The soldier, who seemed to have been chilling with his friends by the poolside, fell from the plastic chair he was sitting on while still shaking violently.

He was surrounded by other men, who watched in amazement as he displayed his madness. One of the men instructed the others to hold him down and added that he was under the influence of colorado.