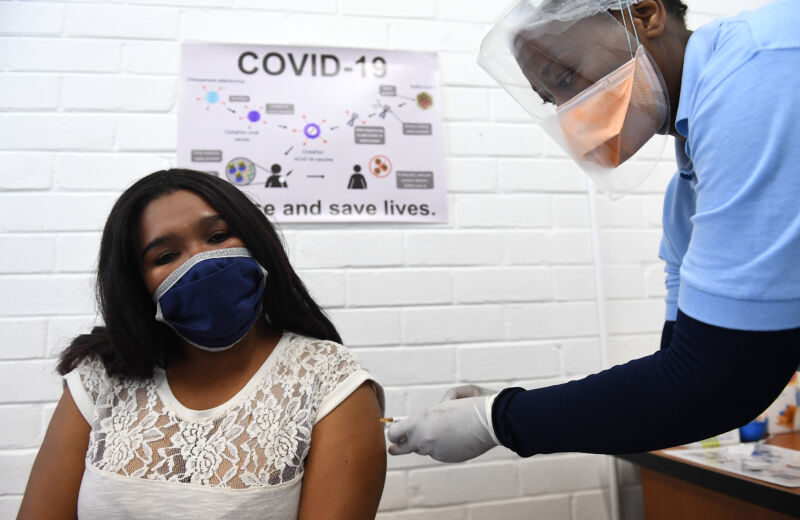 Enlarge / A volunteer receives an injection of AZD1222 from a medical worker during the country’s first human clinical trial for a potential vaccine against COVID-19 at the Baragwanath Hospital on June 28, 2020, in Soweto, South Africa. It is reported that Africa’s first COVID-19 vaccine trial began on June 24 in South Africa.

With the coronavirus crisis gripping the globe, all eyes are on every bump and dip on the path to the pandemic’s end. So, of course, news that researchers triggered a common pause to the clinical trials of a leading COVID-19 vaccine candidate made swift and alarming headlines late Tuesday.

The global phase III trials for the vaccine AZD1222 (formerly ChAdOx1)—developed by the University of Oxford and pharmaceutical giant AstraZeneca—were put on a “temporary” and “voluntary” pause for a “standard review process,” AstraZeneca said in a statement Wednesday.

According the company, the pause was triggered by a “potentially unexplained illness” in one of thousands of participants involved in its trials. Per standard protocol, researchers must pause the trial to investigate whether the illness is related to exposure to the experimental vaccine or not.

“In large clinical trials, illnesses will happen by chance and must be independently reviewed,“ the statement reads. “AstraZeneca is working to expedite the review of the single event to minimize any potential impact on the trial timeline.”

Since the news broke, experts have rushed to emphasize that such pauses are routine and common in late-stage clinical trials. If anything, it’s a positive sign that proper safety monitoring and investigations are taking place. Among those experts is top infectious disease researcher Anthony Fauci, who, in a Wednesday morning interview with CBS News, said that the pause was “not uncommon at all.”

“We see this generally, for the most part,” Dr. Fauci said. “But you don’t know until you investigate it—[if] it’s an adverse event that’s related to something else that just happened to have occurred during the period of time that the clinical trial was on,” or from the actual vaccine.

Fauci explained that, per standard protocol, when unexplained illnesses turn up, it’s common to pause the trial, investigate the illness, and look to see if any other, similar illnesses or problems have cropped up, below the radar, in any other trial participants.

“I think it’s important to point out that that’s the reason why you have various phases of trials, to determine if, in fact, these candidates are safe,” Fauci said. In this phase, this is an example of the kinds of things you do to make sure vaccines are safe, he said.

Of the hundreds of COVID-19 vaccine candidates in development, AZD1222 is seen as one of the most promising candidates for an effective vaccine against the pandemic coronavirus. It’s also one of the farthest along in development, having begun phase II/III clinical trials in the UK, Brazil, and South Africa earlier this summer and a 30,000-person trial in the US last month. Trials are also set for Japan and Russia.

The vaccine is a viral-vector-based vaccine. That is, it packages a bit of the pandemic coronavirus, SARS-CoV-2, inside a different, harmless virus that gets delivered to the immune system. The harmless virus in this case is an adenovirus that causes mild infections in chimpanzees and is further engineered so it cannot replicate in human cells. This adenovirus carries the SARS-CoV-2 spike protein, which is critical for infection and is thought to spur potent, protective immune responses.

AstraZeneca has been tight-lipped on the illness that triggered the pause in the current trials, which was first reported by STAT news. An anonymous source first told STAT only that the illness occurred in a participant in the UK and that the person is expected to recover.

News quickly came to light that the illness might be transverse myelitis, though, which was first reported from an anonymous source of The New York Times. Transverse myelitis is inflammation of the spinal cord that can be triggered by a number of conditions, including inflammatory system disorders (such as multiple sclerosis), vascular disorders, and infections from bacteria, viruses, parasites, or fungi. In rare instances, it can be triggered from a vaccine. AstraZeneca declined to confirm any of those details of the ill participant. In a statement to the Times, the company said that “the event is being investigated by an independent committee and it is too early to conclude the specific diagnosis.”

But on a private conference call with investors Wednesday, AstraZeneca CEO Pascal Soriot confirmed that a UK woman, who had received the vaccine (not a placebo), had neurological symptoms consistent with transverse myelitis, according to a follow-up story by STAT. Soriot noted that she was improving and was expected to be released from the hospital as early as Wednesday.

According to the National Institutes of Health, transverse myelitis usually causes limb weakness, pain, sensory alterations (numbness and tingling), and bowel and bladder dysfunction. An estimated 1,400 people in the United States are newly diagnosed each year. There’s no cure, but it can be treated with corticosteroids, other drugs, and physical therapies. Most people make at least a partial recovery, but some are left with moderate disability, such as trouble walking, nerve sensitivity, and bladder and bowel problems.

Interestingly, Soriot also noted on the call with investors that this is actually the second time the trial was paused. It was also apparently paused in July after a participant showed neurological symptoms and was later diagnosed with multiple sclerosis. Researchers concluded that the diagnoses was not related to the vaccine.

It’s unclear if the new illness in the UK woman is similarly unrelated. For now, little can be drawn from the pause other than that AstraZeneca is following standard safety procedures—a point emphasized by Soriot.

“At AstraZeneca we put science, safety and the interests of society at the heart of our work,” Soriot said in a statement. “This temporary pause is living proof that we follow those principles while a single event at one of our trial sites is assessed by a committee of independent experts. We will be guided by this committee as to when the trials could restart, so that we can continue our work at the earliest opportunity to provide this vaccine broadly, equitably and at no profit during this pandemic.”