Wall Street oil investors spend a fortune trying to figure out how to trade risks, from Opec meetings to Libyan militia movements or even pandemics.

But a doozy is staring them in the face — and oil markets, even after a brisk sell-off this week, have been largely a snoozefest, trading in a narrow range around $40 a barrel for months.

That risk for the oil industry is Joe Biden. President Donald Trump’s positive test for coronavirus has thrown up new uncertainty over the US election but if recent polling is right, Democrat Mr Biden will win the presidency on November 3. His party may even take the Senate, giving it full control of Congress.

Some crisis fatigue may be partly to blame for the oil market’s muted reaction to this prospect. After a Saudi-Russian supply war, the virus-induced collapse of global crude demand, sub-zero prices, dozens of corporate bankruptcies and mass job losses, traders want a breather. As coronavirus cases surge again in some western countries, they have other new threats to consider too.

Some hedge fund executives say the polling cannot be trusted and complain that Mr Biden’s energy policy is not yet clear or might change after he is elected — and so it can’t easily be traded. But a Democratic win would be big moment for the oil market and its industry. Two potential impacts stand out.

In effect, a Biden election could mark the moment when the world’s biggest oil and gas producer officially rejoined the global energy transition.

The efforts of the Trump administration to shore up fossil fuels — scrapping rules on pollution and emissions while appointing climate sceptics and industry lobbyists to positions of power — would be reversed. Renewable energy, already progressing in the US despite President Trump, would accelerate.

One plausible geopolitical impact of a Biden administration would have an almost immediate impact on oil: the possible end of the Opec-plus deal that restored crude prices this year. 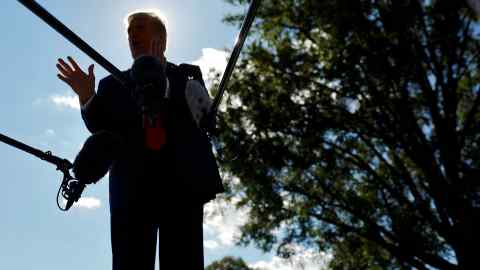 That deal, struck in April, came after President Trump and senators from oil-producing states threatened to suspend military support to Saudi Arabia if it didn’t quickly cut crude production to prop up the market. Riyadh swallowed its pride and obeyed. Prices climbed off the floor. Mr Trump revelled in the dealmaking and continues to take credit for rescuing the shale patch.

What would Mr Biden have done? A deal with a cartel to rescue oil prices — at the behest of Texas — would not have topped his priority list. And keeping the Opec cuts intact would not be a priority for an administration focused instead on a clean-energy revolution.

Opec has grown used to President Trump and his Twitter tongue-lashings — especially his frequent demands that the cartel increase supply and lower oil prices. The producer group was therefore delighted this year when he called for the opposite, effectively asking Opec to prop up falling crude prices to save the American oil patch.

But Mr Biden would probably just ignore Opec. Except for Iran. Mr Biden says he wants to rejoin the international nuclear pact with Tehran that President Trump ditched in 2018 — provided the country complies again with its terms. In theory, he could end US sanctions on Iran’s oil exports within days of entering the Oval Office.

The consequences for oil markets would be far-reaching. The caveats are important — after all Tehran has been insisting that the US return to the deal and lift sanctions before Iran starts complying again.

Kevin Book, head of research at Clearview Energy Partners, a Washington consultancy, says Mr Biden’s Iran policy may “seem more accommodating than it really is”. Still, the ball would be in Iran’s court. A deal would see its oil production soar, inundating an oversupplied market.

Without US pressure to keep with the production cuts, it is hard to imagine Saudi Arabia holding back its crude while Iran, its geopolitical foe, recaptured a chunk of the oil market. Russia, the United Arab Emirates, Iraq, and others itch to expand oil supply again and would follow. The global oil oversupply would grow anew.

These plausible outcomes are not priced into the market. Maybe investors know more than the polls. But trading the oil industry’s twilight years may require new ways to quantify and hedge risk.