Frustration in Israel over a punishing second lockdown has been inflamed by national resentment directed at sections of the ultra-Orthodox community, who have refused to halt mass religious events and clashed with police attempting to disperse them.

While most of the country remained at home in the hope of curbing a raging infection rate that threatens to spiral out of control, thousands of men gathered shoulder-to-shoulder this week at a funeral for Rabbi Mordechai Leifer, 64, who died of Covid-19 complications.

Public television showed footage of a sea of black and fur hats worn by ultra-Orthodox men in the coastal city of Ashdod on Monday, with a small unit of police squeezed in the middle, failing in their attempts to control the crowd. 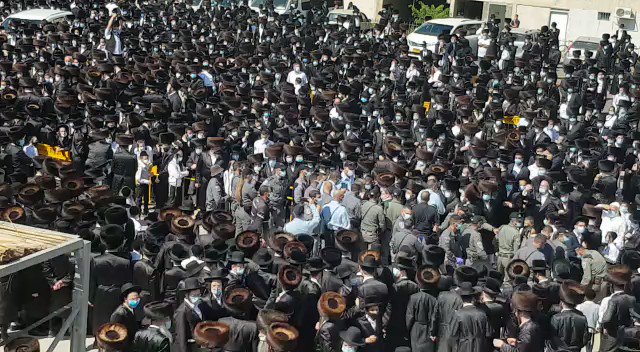 “The images we are seeing are a spit in the face of the entire country,” wrote the staunchly secular, far-right politician Avigdor Liberman, on Facebook.

The pandemic has blown open deeply entrenched grievances between secular and religious elements within Israel that have festered for decades. Under deals made around the time of the state’s founding, many ultra-Orthodox Israelis avoid military service and live off government stipends, factors that have already led to bitterness.

Israel is now facing one of the world’s worst coronavirus outbreaks on a per capita basis, and the ultra-Orthodox community is disproportionately affected. The country’s coronavirus “tsar” Ronni Gamzu said last week that members of the ultra-Orthodox community accounted for up to 40% of new virus cases, despite accounting for about 10% of Israel’s 9 million citizens.

The prime minister, Benjamin Netanyahu, whose government is propped up by ultra-Orthodox politicians, has been accused by secular leaders of appeasing the minority to the detriment of the rest of the country. Last month, following pressure from ultra-Orthodox mayors, Netanyahu dropped a plan for localised lockdowns that would have affected religious areas.

Meanwhile, some within the ultra-Orthodox community see the restrictions as a greater threat to their way of life than the virus, especially as the two lockdowns have coincided with Jewish holidays. The aim was to prevent services in packed synagogues and large family gatherings while lessening the economic burden by locking down during national holidays.

But the measures have been criticised by the most hardline sections of the ultra-Orthodox community, who are vehemently anti-state and have long abhorred the government’s interference in their traditions, leading to regular rifts with law enforcement even before the pandemic.

“[The police] hate us, they hate religion. This is a war on religion, nothing else,” said Yulish Krois, an ultra-Orthodox rabbi and father of 18.

Monday’s funeral followed days of confrontations in ultra-Orthodox districts, with groups of men lighting fires in the road and throwing rocks at police in riot gear. In one incident in the occupied West Bank settlement of Beitar Illit, a police officer was filmed throwing a bucket at a boy.

“We did everything we were requested of – prayed outside, prayed in capsules. In the end, we found out almost all of us had Covid-19 already,” said Krois. “The rabbis told us to continue going to the synagogues, to continue with our festivities and we do what our rabbis tell us to do.”

Many religious Israelis point to the fact that ultra-Orthodox communities often live in poor, congested areas where infections can spread rapidly. They believe they are being unfairly singled out for a surge in infections that has also been attributed to an overly enthusiastic reopening of the economy.

“The situation is more complicated than you see in these pictures and videos,” said Yitzik Crombie, an ultra-Orthodox entrepreneur researching the community’s relationship with the state at the Haredi Institute for Public Affairs.

He said that ultra-Orthodox communities had lost trust in Israel’s fight against the virus because they saw how the government had balanced religious freedoms against other issues, such as reopening hotels and restaurants over the summer while still restricting synagogue attendance.

“The community thought: ‘Why are my values less important than the others?’ They decided they would decide what was important for them,” he said. “There is no trust with the government. You can’t fight the pandemic without trust.”