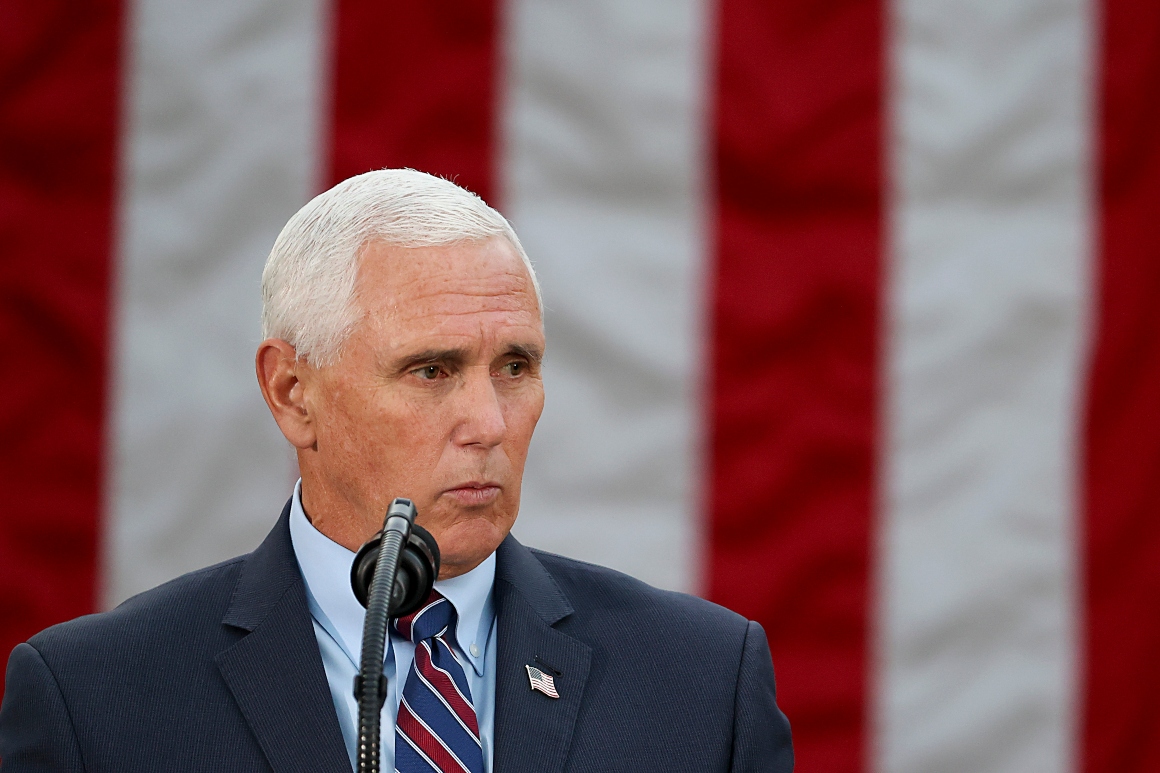 It’s an unusual bind for a vice president who has always been known for coming to Trump’s aid. “At some point, he will have to prioritize his own interests,” said a Republican close to Pence.

What comes after January for Pence is as unknown to the vice president himself as it is to those around him. He doesn’t own a home in Washington or Indiana, where he served as governor before joining the GOP presidential ticket in 2016, and his closest friends aren’t yet sure whether and to where he might relocate. One person familiar with his thinking said Pence is likely to spend the next two years raising money for his own political apparatus if he does launch a White House bid in 2024, delivering paid speeches and assisting GOP House and Senate candidates in the 2022 midterm cycle, all from a home base located back in the Midwest. Pence created his own PAC called the Great America Committee early on in his tenure as vice president and is expected to use it as a vehicle for fundraising between now and 2022.

“He’ll spend a lot of time being out there with members when they need to raise money and helping conservative pro-Trump candidates be successful in their races,” said David McIntosh, a longtime friend of the vice president and head of the right-leaning Club for Growth, who noted that Republicans may have a chance at regaining control of the House in two years given their unexpected gains in the 2020 cycle.

But the more Trump weighs a 2024 bid of his own, the more Pence will find himself in a state of limbo after the 2022 midterm cycle: not wanting to cross his former boss but facing narrowing prospects for his own career if he eschews a presidential bid because of Trump.

Joe Biden won the election more than a week ago. But the But the General Services Administration — the agency that certifies presidential transitions — is still blocking Biden’s transition team from accessing government resources.

Should Trump launch a campaign for a non-consecutive second term — something he’s privately mused about, according to a person familiar with the discussions — allies of the vice president believe he will sit out the next presidential cycle unless he’s on the ticket again himself.

While people close to him acknowledged how frustrating such a scenario would be, they also took pains to underscore Pence’s roll-with-the-punches demeanor and the role faith will play as he determines what’s next for himself and his family. “If President Trump is not reelected and decides to mount that campaign … he would put any personal ambitions aside to help the president,” McIntosh said. “He holds these things lightly because he knows it’s either a calling for him or it’s not.”

“Do I want him to sit it out if Trump or one of his kids runs?” asked a second Republican close to Pence. “Not one bit. But at the end of the day, that’s who Mike Pence is.”

Since Election Day, Pence has put noticeable distance between himself and the Trump campaign’s legal campaign to reverse the election results. While the vice president’s name has been attached to fundraising emails for the president’s legal fund, Pence and his top aides have avoided echoing the president’s claim to victory outright. His spokespeople have also been quiet on Twitter, declining to put their personal accounts to use to elevate baseless allegations of ballot fraud that senior Trump aides with larger Twitter followings have circulated on their own accounts.

But he’s tried to stay somewhat close to the line in speeches to GOP groups.

“We are going to keep fighting until every legal vote is counted and until every illegal vote is thrown out,” Pence said Friday in a speech to conservative student activists involved with the Young Americas Foundation. “And whatever the outcome at the end of the process, I promise you: We will never stop fighting to make America great again.”

During another appearance on Friday hosted by the Council for National Policy, Pence kept his reply brief when audience members began chanting “four more years” during his remarks.

“That’s the plan,” he responded.

In a statement from the Trump campaign, spokesperson Sarah Hasse praised Pence for his loyalty to the president: “Vice President Mike pence has done everything the campaign has asked of him, not just in the days following Nov. 3, but for the months and years preceding it. [He] has been a loyal and reliable advocate for the president from the beginning and will continue to fight for him and the American people every step of the way.”

For the two months between now and Inauguration Day, Pence allies expect the vice president to pour his time and energy into the government’s coronavirus response, particularly amid a spike in hospitalization rates across the U.S.

The vice president will also visit Georgia this week to boost Republican Sens. David Perdue and Kelly Loeffler, both of whom are facing run-off contests in January that will determine whether Biden will face a divided Congress as president.

Even with 2024 hanging in the balance, Pence allies say he has continued to demonstrate a commitment to Trump by working to ensure the president receives credit for key accomplishments even as the spotlight shifts to Biden.

Most recently, the vice president penned an op-ed on Sunday commending Trump for cementing America’s “renewed leadership” in space exploration for the SpaceX-NASA launch of four astronauts to the International Space Station. “The president’s ambitious vision has led our nation into space farther and faster than ever before,” Pence wrote on the day he and his wife Karen represented the Trump administration at the Kennedy Space Center for Sunday’s launch.

Along with routine ceremonial duties, Pence will have a more significant one ahead: On Jan. 6, the vice president will be required to oversee a joint session of Congress as it officially counts the 2020 Electoral College votes — a potentially awkward moment for the vice president if his boss still has not conceded the election by then.