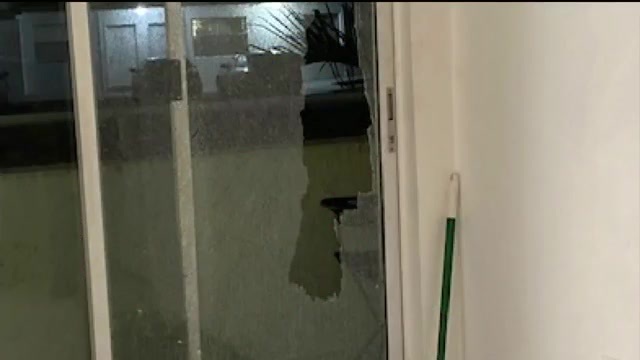 MIAMI BEACH, FLA. (WSVN) – Police are investigating reports of shots fired in Miami Beach after, they believe, a man fired pellets through a first-floor apartment’s window.

Miami Beach Police responded to the scene along the 7000 block of Rue Granville, at around 10 p.m., Wednesday.

Those living in the first-floor apartment said they heard a pop and their sliding glass door shatter. When they looked outside, they saw a man holding a gun.

“All of the sudden, I heard a ‘Pop,’” the victim, who spoke on condition of anonymity, said. “Yeah, it was like a gun. I heard a ‘Pop.’ You could see it like this in his hand, in his right hand. He was kind of like stumbling forward like this as he was walking.”

Police believe a man on the street was firing a pellet gun. He would take off before police arrived.

7News cameras captured investigators inside of the apartment speaking with residents, who were in the apartment at the time the projectiles went through the window. Footage also showed shattered glass on a sliding door that leads onto the apartment’s balcony.

The victim said she was standing in front of the sliding glass door when the shots were fired.

The resident added the man was wearing a cap and a hoodie on the dark street but did not get a look at him.

“It’s just really scary,” the victim said. “I’ve been living here for five years, and I’ve never had any type of problem like this. I don’t have any enemies or nothing like that, and I could have been an innocent person. It literally would have gone through my head had it gone through the window, so it’s just really sad.”

She said police told her a car that was passing by also had a window shot out.

No injuries have been reported.

If you have any information on this shooting, call Miami-Dade Crime Stoppers at 305-471-TIPS. Remember, you can always remain anonymous, and you may be eligible for a $1,000 reward.