Smoke filled the air outside the North Precinct overnight as protesters clashed with cops seeking to clear the area — a scene reminiscent of others that have taken place over the past few weeks in the city. 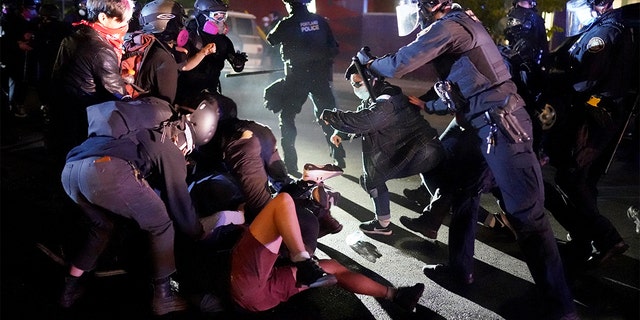 PORTLAND, OR – AUGUST 22: Protesters and Portland police clash while dispersing a crowd gathered in front of the Portland Police Bureau North Precinct early in the morning on August 22, 2020 in Portland, Oregon. Friday marked the 86th night of protests in Portland following the death of George Floyd. (Photo by Nathan Howard/Getty Images)

“There were also balloons filled with feces thrown on the cars and even a torn-up street sign was used to vandalize the marked police cars,” police said in a statement. “Windows were broken and tires were deflated.”

Officers eventually dispersed the crowd except for a few stragglers.

One of those was shot with a sponge-tipped less-lethal round after he was seen throwing rocks at officers, police said. He was subsequently provided with medical treatment and arrested.

One of the injured officers was treated for a laceration to her leg after being struck with a rock, police said.

PORTLAND PROTEST DATA SHOWS POLICE HAVE DECLARED AT LEAST 17 RIOTS, MADE MORE THAN 490 ARRESTS SINCE MAY 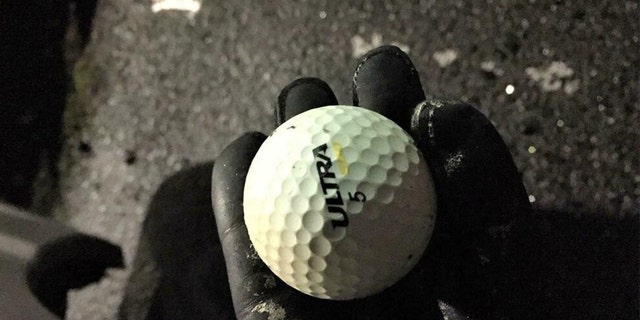 Porland police said they recovered this golf ball after it was thrown through a van window during a riot outside a precinct early Saturday. (Portland Police Department)

On Friday, protesters clashed with federal agents outside a U.S. Immigration and Customs Enforcement building. People in a group of about 100 late Thursday and before dawn Friday spray-painted the building with graffiti, hurled rocks and bottles at agents and shined laser lights at them, Portland police said.

The agents set off smoke or tear gas and used crowd-control munitions to try to disperse the crowd. Three people were arrested.

Also Friday, a number of federal buildings across the city were closed as the FBI investigated a car bomb threat.