Preorders are open for the iPhone 12 and iPhone 12 Pro

Apple’s “Hi, Speed” has come and gone. And we officially have four new iPhones: iPhone 12 mini, iPhone 12, iPhone 12 Pro and iPhone 12 Pro Max. All support 5G, are powered by the A14 Bionic processor and feature camera improvements. The launch is a bit more segmented than in years past, though.

There’s also a $99 HomePod Mini, which goes up for preorder on November 6. There’s a lot to unpack here, though, with MagSafe for the iPhone and much more. 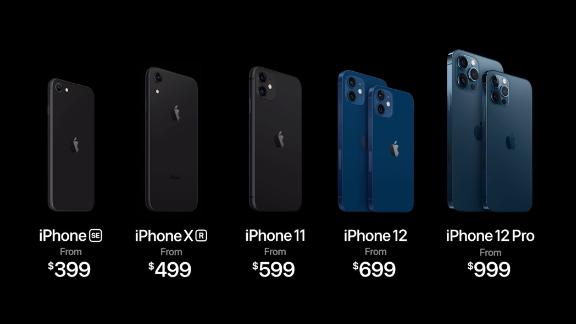 Freindly reminder, that there won’t be a wall plug or earbuds in the box. This Anker nano charger is fast and features a USB-C port. Apple’s MagSafe cases are up for preorder as well and start at $49.99 for both the iPhone 12 and 12 Pro.

5G is coming to the iPhone

Apple seems quite bullish about 5G on the iPhones, noting that it will bring big new features to you, the end-user. And Apple has been partnering with Verizon on 5G, claiming the new iPhone will support Ultra Wideband. We’re left with some questions about support from other carriers and the slow rollout from Verizon on UWB, though, as we’ve noted with Samsung devices this year. 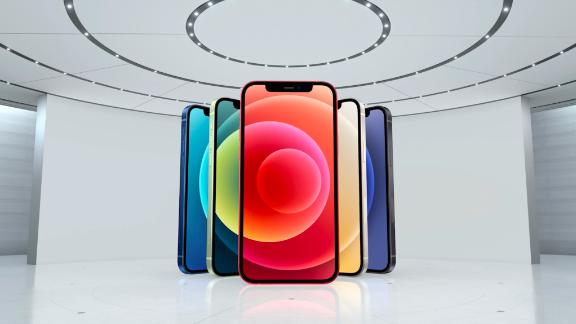 The iPhone 12 is real — and really colorful. It’s an all-new design keeping the aluminum frame with a glass back and a glass front for the screen. And, yes, it’s kind of a callback to the iPhone 4 and iPhone 4 flat design. It keeps the same 6.1-inch display size as the iPhone 11, but bezels are smaller. And OLED is coming to non-Pro iPhones: The iPhone 12 has a Super Retina XDR Display. It keeps the same 2,000,000:1 contrast ratio and has twice as many pixels as on the iPhone 11. That means clearer text, darker blacks and extra-vibrant colors. Safe to say OLED on iPhone 12 is big. The iPhone 12 will be available in Black, White, (PRODUCT) RED, Green and Blue. Yes, the latter matches the Apple Watch Series 6.

Apple has been working with Corning for new material on the iPhone 12, which Apple has dubbed Ceramic Shield and claimed is tougher than the glass on any other smartphone. On the 5G front, it was a full team effort, from where to place the antennas and even using Silicon (the processor) to be more efficient. The iPhone will also intelligently switch between 5G networks and 4G LTE networks. This will help save battery life.

And what’s most exciting to us is the new chip inside the iPhone 12: A14 Bionic, an Apple-made Silicon chip built on the 5-nanometer standard, is the same processor powering the iPad Air. There are 11.8 billion transistors inside this chip, an increase of 40% over the A13.

So what makes up the A14 Bionic? It’s a 6-core GPU and 4-core GPU, and there are improvements to machine learning courtesy of the neural engine. The latter moved from 8 cores to 16 cores. This all means the iPhone 12 will be quite efficient and you likely won’t experience any slowdowns. We will, of course, put this to the test. You can bet that Apple tuned this for iOS 14 as well.

Apple specifically called out that League of Legends: Wild Rift will be arriving on the iPhone, and A14 will be making it possible — along with a shoutout to Verizon for 5G to allow gaming from anywhere. (Anywhere with a network connection, that is.)

On the camera front, there’s still a dual-camera system:

All of these come together to deliver the classic iPhone photography experience. No need to dillydally around with modes — just point and shoot. That’s thanks to computational photography and smart HDR 3. This will analyze whatever you’re shooting in real time. It should be really impressive, and it’s not just photos during the day. Night Mode is here, expanding to both back cameras and the TrueDepth front-facing system.

On the video front, Apple is delivering a night time-lapse mode. We expect, from the demo video and our analysis, that this should deliver the same low-light performance from still photos to videos shot on the iPhone 12. 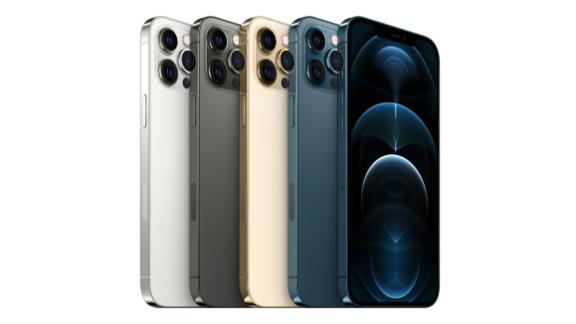 As expected, we have two additional iPhones. The iPhone 12 and iPhone 12 Pro Max. Both adopt this new flatter design, with a shiny machine-milled stainless steel edge and three cameras on the back.

To be specific, it’s a precision glass back and a stainless steel edging. The Pro models look stunning in Space Gray, Silver, Gold and Pacific Blue. They’re rated up to IP68 for water resistance. They support the MagSafe charging standard and feature the new Ceramic Shield display.

Let’s talk about the camera setup:

The 12 Pro Max gets some additional camera smarts as well. It specifically gets 87% improved in low-light performance, and that means better Night Mode performance as well.

Coming later this year to the 12 Pro and 12 Pro Max will be CameraProRaw, which keeps all the data and allows you to process the image on the device itself or within other pro apps (think Photoshop). It combines the raw image with Apple’s computational photography. Previously, you’d have to pick one or the other.

On the video front, Apple is enabling HDR video recording. To be specific, 10-bit dynamic range allows you to capture more colors and an overall sharper image. It’s also the first device to record Dolby Vision HDR. This is a pretty deep partnership with Dolby. This is enabled for 4K resolution at 60 frames per second. It all happens on-device, tapping into the power of A14 Bionic.

As expected, after it debuted on the iPad Pro 2020, LiDAR is coming to the iPhone 12 Pro and 12 Pro Max. You’ll be able to precisely scan rooms, take full advantage of augmented reality (AR) and improve photos. For instance, Apple uses LiDAR in low light to enable faster autofocus. Apple claims it’s 6x faster at delivering autofocus in low light. 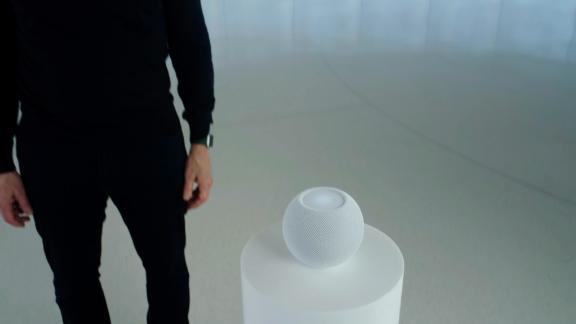 A smaller HomePod is official, and it’s spherical like the new Amazon Echos. Mesh fabric is wrapped around the outside, like the larger HomePod, and is available in either Space Gray or white. Center on the top is an LED-backlit screen that glows when Siri is engaged. You can also control volume and playback on the screen.

As expected, it will be tuned for audio, capable of acting as a Siri-powered smart home hub. Inside, there are two forward-facing speakers with a woofer on the bottom. Like the larger HomePod, there’s an Apple S5 chip inside, which enables computational audio. Essentially, the speaker will analyze the music to give you the best dynamic experience for your current setup. It takes these readings over 180 times a second.

You can, of course, pair multiple HomePod Minis together and two will auto pair for stereo. We’re hoping HomePod Mini can also pair with the original HomePod. Apple also noted that later this year you’ll be able to seamlessly hand off from your iPhone to the mini speaker by just holding your phone near it.

Big News: HomePod Mini will support Apple Music, iHeartRadio, Podcast, Pandora and Amazon Music. Notably, Spotify is missing from that list. You can still cast directly from your iPhone, iPad, Apple Watch, Mac or Apple TV via the AirPlay 2 standard (essentially, Apple’s technology for streaming music from your iPhone).

Siri on the HomePod will be the same personal assistant as on any other supported device. Yes, she can be your DJ, but you can ask her to text, make a call and even tell you your next scheduled calendar event. She can even give you a rundown of your day, much like how the Google Assistant or Amazon Alexa do. Multiple voices are supported on the HomePod Mini and will give specific responses depending on the person chatting with her.

What’s pretty notable is that if you ask what time a store closes, Siri will sync up with CarPlay to have directions ready to go for you. That’s the seamless integration we really want to try.

On the smart home side, the HomePod Mini can act as a hub. You can ask her to turn on lights, lock the doors and even turn on a smart plug, like you can on any Siri-enabled device (i.e., all the standard home control experience you’d expect).

New with HomePod Mini is Intercom, though, a feature that lets you send a message from one HomePod Mini to another. And it goes a step beyond, also working with iPhone, iPad, Apple Watch and CarPlay. Alexa and Google speakers work only with connected smart speakers.

HomePod Mini will cost $99 and go up for order on November 6. You can expect orders to arrive starting November 16.

Return of the MagSafe 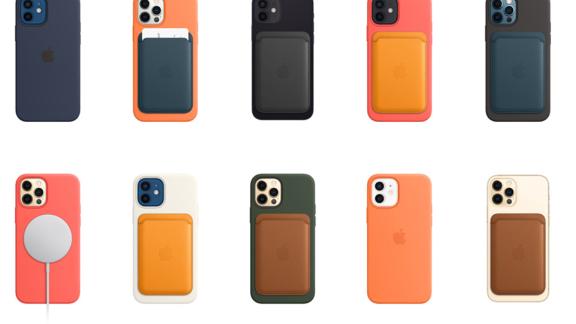 Remember MagSafe, the handy old Mac laptop chargers that added a magnet to the front of the charging port? If you tripped over the cord, it didn’t take the laptop down with it. Well, Apple is bringing MagSafe to the iPhone in the form of magnets being built into the wireless charger coil. And Apple is boosting the charge speed from 7.5 watts to 15 watts. That means much faster charging times. Essentially, cases and wireless chargers are magnetized to the back of the iPhone. A case snaps to the back of the iPhone. A wallet case attaches to the phone case. And the wireless charger attaches to that.

Apple has a combination MagSafe Duo Charger that combines an iPhone charger with an Apple Watch charger. It’s not AirPower, but it is an Apple-made wireless charger. We’ll be digging into this new MagSafe standard soon enough.

And we can finally confirm: No headphones or wall plugs will come in the box of any iPhone 12 models. It might hurt a little, but it will reduce emissions and shrink the box of the iPhone by a whole lot. Luckily, there are plenty of accessories to pick from, as a USB-C to Lightning cable will be included in the box.

So, yes, the iPhone 12 family doesn’t ship with earbuds in the box, but Beats by Dre has quite a solution. It also won’t cost you nearly as much at the $249.95 Powerbeats Pro. Introducing the Beats Flex, a $50 pair of Bluetooth earbuds (note the cord connecting the two) that features Apple’s W1 chip for fast pairing.

Essentially it’s the 2020 version of Beats X with updated internals. Beats Flex now deliver 12 hours of battery life and will charge via a USB-C port. You can get Beats Flex in Beats Black, Yuzu Yellow, Smoke Gray and Flame Blue.

And the design is not so much a neckband as it is a lightweight flex-form cable. Most importantly, you can wear it as a necklace when not in use. Powering the audio are dual-chamber acoustics in both the left and right earbuds. It should be improved sound that’s on par with more recent products.