Indo-Pacific humpback dolphins, also know as white dolphins or pink dolphins, have returned to parts of the Pearl River Delta in Hong Kong — and their resurgence is being attributed to the coronavirus pandemic. Researchers say the number of these dolphins off Hong Kong has jumped 30% because of a pause in ferry traffic in recent months.

The dolphins moved back into parts of the river they once avoided due to the ferries that would carry passengers from Hong Kong and Macau, marine scientist Lindsay Porter of the University of St. Andrews said, according to Reuters.

Ferry traffic was suspended in March, which also allowed scientists an opportunity to study how underwater noise affected their behavior, Porter said. 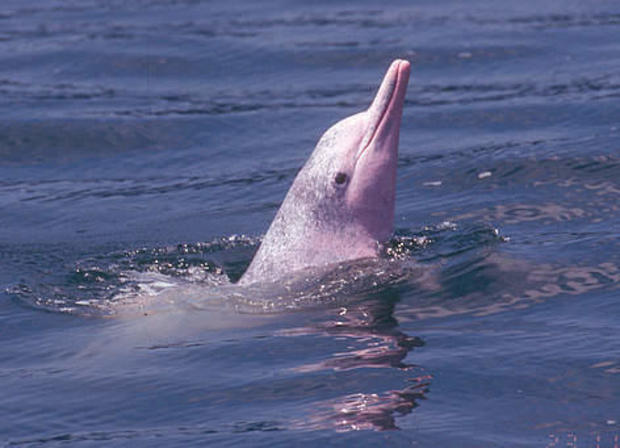 The population of the Indo-Pacific Dolphins – also known as white dolphins or pink dolphins – in the Pearl River Estuary is estimated to be around 2,500 individuals, the WWF says. Lindsay Porter via WWF

Porter and her team drop microphones from a boat and use drones to watch out for the dolphins. Their research suggests the dolphins adapted quickly to the more quiet environment and now the population in the river is likely to bounce back.

This type of dolphin was first recorded in local waters as early as the 1600s, according to WWF Hong Kong. The population in the Pearl River Estuary is estimated to be around 2,500 individuals, but the organization says that in recent years there has been a “worrisome decrease.”

“I sometimes feel that we’re studying the slow demise of this population, which can be really sad,” Porter said, according to Reuters.

WWF Hong Kong says the threats to these dolphins include overfishing, water pollution and heavy marine traffic, and coastal development. However, the research being done in this area could also help dolphin populations elsewhere, Porter told Reuters.

CBS News has reached out to Porter at the University of St. Andrews for more information.