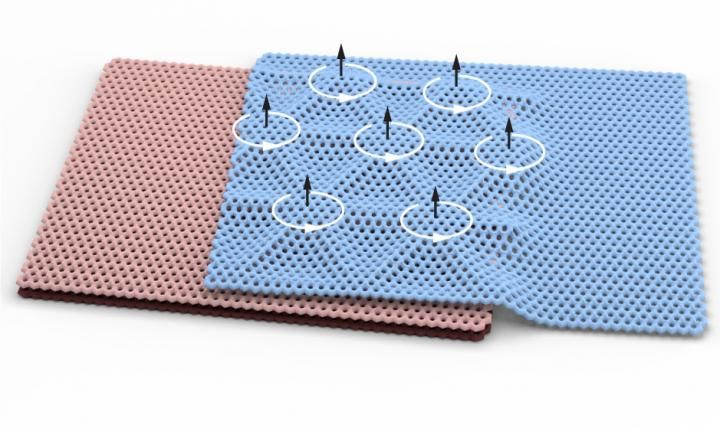 Graphene, one of the world’s strongest materials, isn’t normally magnetic. But when stacked and twisted, graphene develops a rare form of magnetism, new research finds.

The magnetic field isn’t created by the usual spin of electrons within the individual graphene layers, but instead arises from the collective swirling of electrons in all of the three-layers of the stacked graphene structure, researchers reported Oct. 12 in the journal Nature Physics.

Graphene is a material made of a single layer (or monolayer) of carbon atoms arranged in a honeycomb pattern. It’s incredibly light and strong (though it is vulnerable to cracking). It also conducts electricity, making it exciting for use in electronics and sensors.

“We wondered what would happen if we combined graphene monolayers and bilayers into a twisted three-layer system,” Cory Dean, a physicist at Columbia University in New York and one of the senior authors on the new paper, said in a statement. “We found that varying the number of graphene layers endows these composite materials with some exciting new properties that had not been seen before.”

Dean and his colleagues stacked two layers of graphene and then added a single layer on top, rotating the stack by 1 degree. They then studied this graphene sandwich in a variety of circumstances, including temperatures just above absolute zero (the point at which all molecular motion stops). At these low temperatures, they found that the graphene stopped conducting electricity and became an insulator instead.

Perhaps strangest of all was the rare magnetism that appeared in the three-layer structure. A study published by another group in the journal Advanced Materials found that graphene bonded with boron nitride can give rise to a strange magnetic field; that field arose from the molecular bonds of the carbon in graphene and the boron in boron nitride. The new research reveals that this same type of magnetism can occur in pure graphene alone, simply because of interactions between carbon molecules.

“Pure carbon is not magnetic,” study co-author Matthew Yankowitz, a physicist at the University of Washington in Seattle, said in the statement. “Remarkably, we can engineer this property by arranging our three graphene sheets at just the right twist angles.”

The structure also contains regions where the properties are undisturbed by the twisting of the layer. These unique areas in the material could be exploited for data storage or quantum computing applications, study co-author Xiaodong Xu, also at the University of Washington, said in the statement.

The researchers are now planning to delve deeper into the fundamental properties of the graphene structure. “This is really just the beginning,” Yankowitz said.