This weekend’s full moon will not only be a Blue Moon – which is what we call the second full moon in a calendar month – but it’s going to be a Micro Moon, too, according to NASA. What’s that? Think of it as the opposite of those “supermoons” that we’ve been getting used to lately.

This Saturday’s full moon is also a rare because it’s rising on Halloween for the first time in 76 years. The last time we had a full moon on All Hallows’ Eve was 1944, according to the Old Farmer’s Almanac.

The next time all U.S. time zones will see a full moon is 2039, so don’t miss your chance.

While the moon officially becomes full on Saturday, it will appear full beginning Thursday night and last through Sunday. So it will feel like a full moon weekend. 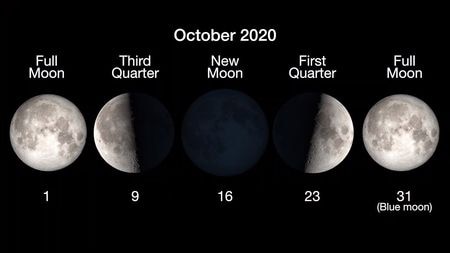 October 2020 has two full moons, making the Oct. 31 moon a Blue Moon, according to NASA.

It will also be a full Hunter’s Moon. In his latest NASA blog, Gordon Johnston explains how this moon got its name.

“According to the Farmer’s Almanac, with the leaves falling and the deer fattened, this was the time to hunt,” he said. “Since the harvesters had reaped the fields, hunters could easily see the animals that have come out to glean (and the foxes that have come out to prey on them). The earliest use of the term ‘Hunter’s Moon’ cited in the Oxford English Dictionary is from 1710.”

And what about that “Micro Moon” label? Johnston says: “Since this full moon occurs near when the moon is farthest from the Earth (apogee), this is a Micro Moon (the opposite of a ‘Supermoon’).”

Other names for this moon are the Beaver Moon, the Frost or Frosty Moon and the Snow Moon, he said.

Oct. 31 will have a Full Moon, Three Planets and Bright Stars

In addition to this Full Micro Blue Moon, Johnston says there will be some other treats for sky-watchers. Look up and see if you can find these: