This summer, we reviewed Roku’s audio products, starting with the Smart Soundbar, then adding in the Roku Wireless Speakers, before combining all of them to create a 5.1 surround sound system.

Then, at the end of September, Roku announced its second all-in-one device called the Streambar. It acts as a streaming box, providing access to Roku’s interface and channels, while also acting as a petite soundbar. You can order the Streambar now for $129.99.

After testing the all-in-one Smart Soundbar and the rest of the Roku Audio setup, we couldn’t wait to put the Streambar to the test. And after a couple weeks of testing, it’s clear to us the Streambar deserves its spot in Roku’s lineup. 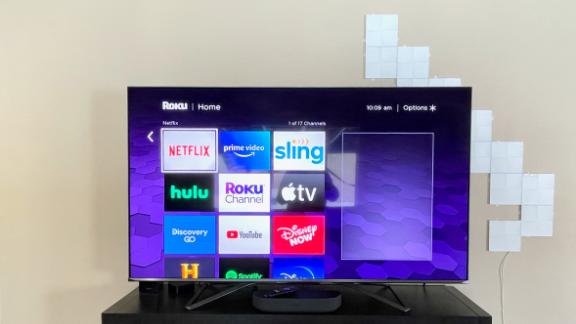 The first thing we noticed about the Streambar when unboxing it was just how small it is. Its petite frame measures 14 by 4.2 by 2.4 inches. Compare that to the larger Soundbar, which measures 32.2 by 3.9 by 2.8 inches, and you can see why the Streambar feels so small. We tested it connected to the 65-inch HiSense H9 Quantum 4K TV, making its small stature almost comical. However funny it may look in our setup, it’s the only soundbar we’ve tested that actually fits between the legs of the TV — something Roku’s Soundbar doesn’t do.

On the back of the Streambar is a power adapter, an optical connector, an HDMI port, a USB-A port that can be used to connect external storage to view local movies and photos and a reset button. 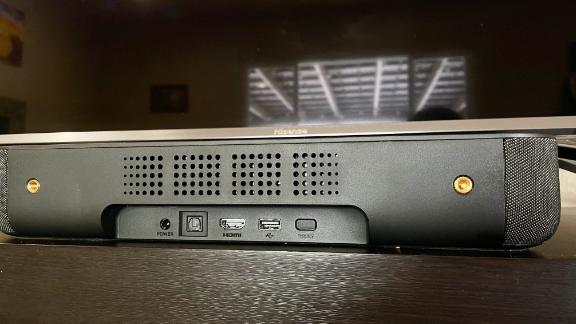 The front of the speaker is covered in a cloth material, hiding four speakers. Two are pointed directly in front of the Streambar, with the other two angled on either end of the bar. The remainder of the device is covered in a black plastic, save for the bottom, which is made of rubber to stop the bar from moving across your TV stand as it shakes and vibrates while blasting your favorite tunes or streaming a movie. If you’d rather mount the Streambar on your wall, it does have two M6 x 8mm threaded sockets.

Despite its comical appearance under a 65-inch TV, we have no design issues or qualms with the Streambar. It fits in with the rest of Roku’s audio lineup and didn’t look out of place in our living room. 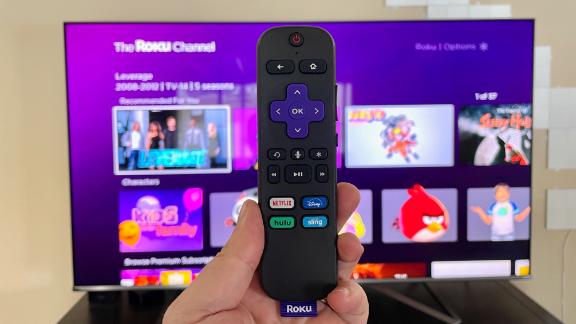 Inside the Streambar’s box is Roku’s voice remote with TV controls, a High Speed HDMI cable, optical cable, two AAA batteries and the power cable and adapter — essentially everything you need to get going.

Initial setup took just a few minutes after unboxing everything and consisted of connecting the Streambar to our TV’s ARC-enabled HDMI port. Doing so allows all audio, regardless of the input, to be routed through the Streambar, meaning that whether we’re playing Call of Duty: Warzone on the Xbox One X or streaming a show on an Apple TV+, all audio still goes through the soundbar.

After connecting the bar and turning it on, we had to go through a few setup prompts, sign into our Roku account and wait for the bar to download and install the various Roku channels and apps we selected during the setup process.

Roku currently supports nearly every major streaming platform, ranging from Netflix and Hulu to Amazon Prime Video and Apple TV+. Notably missing from the lineup is HBO Max. There’s no ETA on when or if Roku and HBO will come to an agreement about bringing the service to Roku’s product offering, but it’s sorely missed, so hopefully it happens sooner than later.

The Streambar supports 4K HDR picture quality. Combine that with Dolby Audio support, and the Streambar is equipped to keep up with nearly anything you can stream. We tested several different shows and movies, plus gaming.

The Streambar filled our living room with plenty of volume, allowing us to hear the torpedo’s speed through the water in Apple TV+’s “Greyhound,” following the projectile as it went from the left to right side of the screen. The same goes for smaller, more subtle audio cues in “The Office.”

That said, we can’t help but feel that the size of the Streambar limits the overall soundstage, with all of the sound coming from the middle of the TV, despite the end speakers’ best effort. We’re admittedly nitpicking here, as it wasn’t always apparent, but after using the Smart Soundbar for an extended amount of time along with other 5.1 surround sound systems, it was something we noticed.

Playing Xbox while testing the Streambar was fun. Speeding cars and explosions in Warzone had direction and distance to their sound effects, and nearby steps were easier to discern than when playing via the TV’s speakers.

Using the Streambar to listen to Spotify or connect our iPhone and stream Apple Music (have you heard the new Kyd the Band album? It’s fantastic), the Streambar’s musical chops did not leave us disappointed. We didn’t feel like the bass overpowered the experience but instead added to it.

The Streambar is compatible with the rest of the Roku audio lineup, meaning that if you decide in the future you want to add the wireless speakers or subwoofer to your setup, you can.

During our two weeks of testing, we didn’t run into any performance hiccups or issues, save for the occasional pixelated picture, but that could have been our internet connection, which has been up and down over the last week. Our loudest (forgive the pun) complaint is the lack of a wider soundstage, but again, we’re nitpicking. 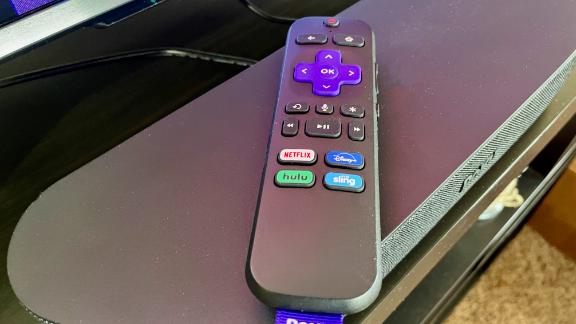 Roku now offers two different all-in-one audio devices. The Smart Soundbar offers a more robust and rich audio experience, while the Streambar holds its own but lacks the depth and overall soundstage as its bigger and slightly more expensive sibling. That said, either option is worthy of our recommendation.

The $129.99 Streambar is compact and powerful, and it provides better sound than your TV’s built-in speakers. The $179.99 Smart Soundbar improves upon that experience, with both devices setting the stage for expanding the system to include Roku’s Wireless Speakers and Wireless Subwoofer.

You can’t go wrong with either one, but if you’re someone who simply wants better sound and a streaming box, the all-in-one Streambar is an easy choice at an affordable price.