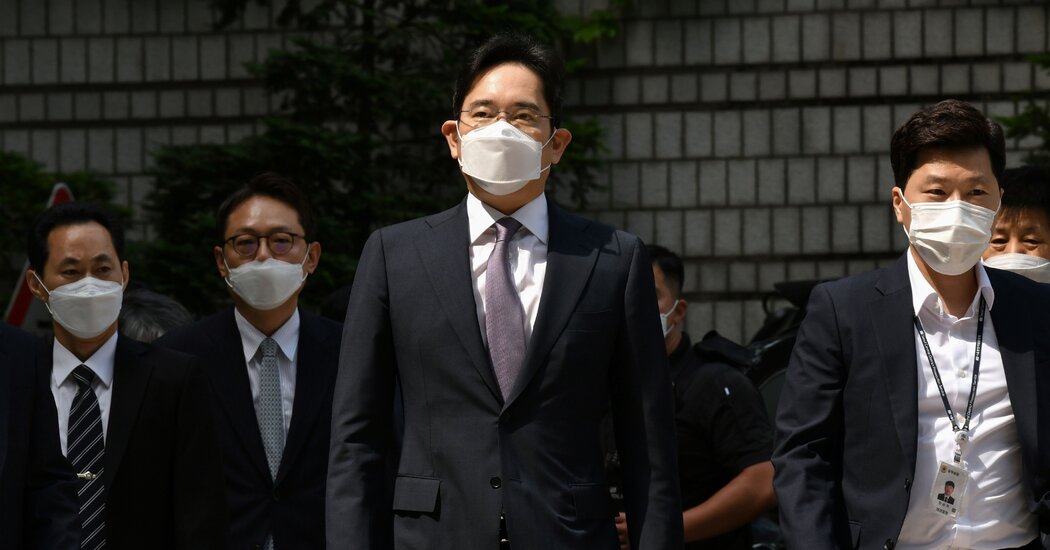 SEOUL, South Korea — Lee Jae-yong, the heir to the South Korean tech and industrial giant Samsung, was indicted on Tuesday on charges of engaging in stock price manipulation, unfair trading and other illegal means to tighten his control over the country’s biggest conglomerate.

But prosecutors could not arrest him because the Seoul Central District Court had earlier refused to issue a warrant allowing prosecutors to arrest Mr. Lee, who has been running Samsung since a heart attack incapacitated his father, Lee Kun-hee, in 2014. Samsung has denied the allegations.

Prosecutors may not have a slam-dunk case. The court’s refusal to issue an arrest warrant raised doubts in South Korea about the strength the prosecution’s cause, particularly after a review panel in June recommended against indicting Mr. Lee because of a lack of incriminating evidence. Mr. Lee requested the outside review of the government’s investigation, invoking a regulation prosecutors introduced in 2018 to enhance the neutrality and fairness of their inquiries.

Successive leaders of South Korea, including President Moon Jae-in, have taken office vowing to eradicate corruption at the chaebol, or family-controlled conglomerates, that dominate their country’s economy.

South Korean courts have often proved lenient toward chaebol chiefs​ convicted of white-collar crimes. Mr. Lee’s father was convicted twice of bribery and other corruption charges, but never spent a day in prison. ​

Mr. Lee, commonly known as J.Y. Lee in the West and arguably South Korea’s most influential businessman, previously spent a year on charges that he bribed Park Geun-hye, the impeached and ousted former president of South Korea.

In a statement on Tuesday, lawyers for Mr. Lee called the charges “one-sided arguments not based on evidence or legal principles and are not true.” They added that the prosecutors’ decision to indict Mr. Lee “is not only unfair but also will damage the people’s trust in them.”

Mr. Lee in the past has denied any wrongdoing, but he has sought to defuse public anger against Samsung and his family.

On May 6, he apologized for the recurring corruption scandals at Samsung. He admitted that those scandals stemmed from attempts to ensure a father-to-son transfer of managerial power at the company, and said he would be the last in his family to lead the corporate empire.

But Mr. Lee stopped short of clarifying whether he or Samsung had broken the law in such efforts.

“All of the problems basically started from this succession issue,” he said at the time. “From now on, I will make sure that no controversy happens again regarding the succession issue.”

Mr. Lee holds the position of vice chairman at Samsung. The company is ingrained in the everyday life of South Korea through an array of businesses that include electronics, financial services and heavy manufacturing. His family controls Samsung through a series of legal and financial arrangements among the conglomerate’s many arms.

On Tuesday, prosecutors formally indicted Mr. Lee again on criminal charges stemming from a merger of two Samsung affiliates in 2015 that helped him increase his control over the entire Samsung empire, including its crown jewel, Samsung Electronics.

Prosecutors also indicted 10 other current and former Samsung officials, including two former top executives, Choi Gee-sung and Kim Jong-joong, who were also accused of engaging in stock-price manipulation, unfair trading and audit-rule violations as part of a systematic effort to help transfer the managerial control of Samsung to Mr. Lee, now 52.

Such efforts culminated in the 2015 merger of the two Samsung affiliates, Samsung C&T and Cheil Industries, prosecutors said.

In the 2015 merger, one share of Cheil Industries was traded for about three shares of Samsung C&T. The deal helped Mr. Lee enormously, prosecutors say.

Before the merger, Mr. Lee was the largest shareholder of Cheil Industries, with a nearly one-quarter ownership stake. He owned no share of Samsung C&T. The inflated value of Cheil Industries gave Mr. Lee a bigger share in the company created through the merger than prosecutors said he had deserved. The company created through the merger, also named Samsung C&T, is a linchpin in controlling the entire conglomerate.

Samsung denied the stock-manipulation allegation, as well as Mr. Lee’s involvement in the decision-making at Samsung Biologics.

In 2017, Mr. Lee was sentenced to five years in prison for providing Ms. Park, then president of the country, and one of her friends with $7 million in bribes to obtain the government’s support for the 2015 merger. In February 2018, an appeals court judge reduced his prison term to two and a half years and suspended the sentence, releasing him from prison. The judge ruled that the amount of bribes Mr. Lee had provided was less than half the sum determined by the trial court.

Events have since turned against Mr. Lee.

In August, the Supreme Court of South Korea ruled that the appeals court had underestimated the value of the bribes, and sent the case back to the lower court for retrial.

In November 2018, the government’s Securities and Futures Commission formally accused Samsung Biologics of accounting fraud. Prosecutors have since expanded the investigation into the 2015 merger, building new criminal charges against Mr. Lee.

But the market has signaled its support for Mr. Lee and Samsung Biologics, company officials said, citing the subsidiary’s stock prices. Share prices increased from 410,000 won ($346) in December 2018, when prosecutors raided the company, to 783,000 won ($661) on Tuesday.