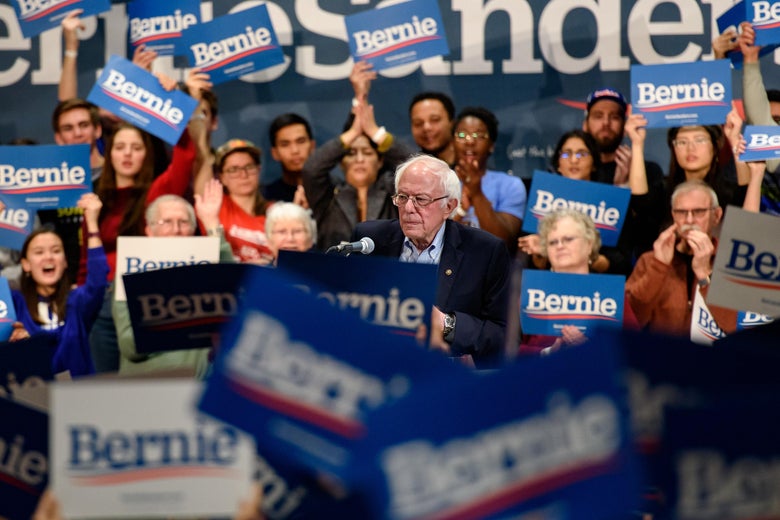 If you look at the national Democratic primary polls, it might seem as if Bernie Sanders is only the frontrunner because his many opponents have split up the party’s moderates. The senator from Vermont currently leads in the Real Clear Politics polling average with 23.6 percent of the vote. Joe Biden, Michael Bloomberg, Pete Buttigieg, and Amy Klobuchar, by comparison, combine for 48.6 percent. Surely, one of them could win in a head-to-head matchup against Sanders, right?

Maybe not. Yahoo News and YouGov are out with a new poll showing that Sanders beats all of his top competitors in head-to-head races. He currently wins at least 53 percent of the vote against Bloomberg, Buttigieg, and Klobuchar, none of whom break more than 38 percent. The matchup is closer with Biden, who gets 44 percent versus 48 percent of Sanders. But the tightest race is with Warren, who trails him 42 percent to 44 percent, with plenty of undecideds.

“A new Yahoo News/YouGov poll shows that Sen. Bernie Sanders would defeat each of the other Democratic presidential candidates in a one-on-one race” (via @YahooNews)https://t.co/OJyQI1YeT9 pic.twitter.com/C5AwRw6O4u

It’s just one poll. But it does seem to reflect one of Sanders’ often overlooked strengths: The man is incredibly well-liked by normal Democratic voters. Sure, he might terrify some DNC officials and cable news talking heads. Hillary Clinton and her hangers-on still have it out for the guy. But according to Morning Consult, he’s got a 74 percent favorability rating within the party, higher than any other candidate. A lot of current Biden, Buttigieg, Warren, and even Bloomberg supporters currently list him as a second choice.

This might not make a ton of sense if you assume that voters pick their candidates on strictly rational ideological grounds. But that’s obviously not how the world works. People vote for candidates because they’re familiar, because they seem trustworthy, or just because they’re kind of likable. There are some Democrats out there who are probably planning to vote for Bloomberg right now because they’ve been inundated with his ads, but otherwise would default to Sanders because they’ve been hearing his name since 2016 and kind of enjoy the guy’s attitude. It might not make sense to a news junkie, but in the grand scheme of American voters, news junkies are really the outliers.

It’s possible that candidates like Klobuchar or Buttigieg could gain ground one-on-one against Sanders as they become more familiar to the national electorate. But if moderates take this latest head-to-head poll seriously, it really suggests that—as of now—their best shot at beating Sanders is to coalesce around Biden or Warren. Personally, I’d suggest the latter. Biden still has residual love left over from his days as Joe the Veep. But watching him talk feels like staring into an RCA TV from 1985 with a busted antenna: The picture and sound are half static and you’re never really sure when the whole thing is going to break down for good. Warren, on the other hand, is a vibrant, avowed capitalist who has pretty much promised that she won’t waste time trying to pass single-payer health care. Sure, her campaign’s flagging, but in our current election cycle, this staunch progressive just might be the last great neoliberal hope.

Readers like you make our work possible. Help us continue to provide the reporting, commentary and criticism you won’t find anywhere else.