Four years ago, comet-hunting spacecraft, Rosetta, took a final swan dive into the face of the comet 67P/Churyumov-Gerasimenko. It was the dramatic culmination of the European Space Agency’s twelve-year mission to study the icy object.

While Rosetta may be gone, its memory lives on in data. Scientists continue to analyze these data, collected from its time around and on the icy dirt ball, transforming scientists’ understanding of tiny interstellar objects like comet 67P — and confounding expectations

A new analysis of emissions from the comet’s gassy “coma” published Monday in Nature Astronomy marks yet another unexpected discovery: the first-ever observed aurora on a celestial object aside from moons and planets.

The discovery could enable scientists to better observe such objects in the future, and protect spacecraft and satellites against rogue solar radiation.

Auroras on Earth take place when charged particles from the Sun take a ride on our the planet’s magnetic field lines all the way up (or all the way down) to the north and south poles. As these solar particles bounce off molecules in the Earth’s atmosphere, they jump between different parts of the visible light spectrum.

This activity creates billowing and beautiful curtains of reds, greens, and blues in the upper atmosphere. Similar auroras have also been observed on Mars, and Jupiter’s moons Ganymede and Europa, but never before on a stellar object like a comet. 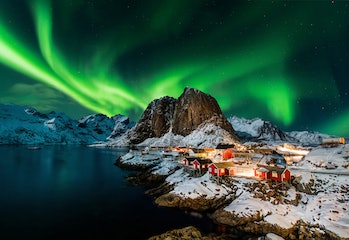 On Earth, the Northern and Southern lights dance within our visible spectrum, but on a comet it’s harder to see.Shutterstock

Previous analysis of emissions coming from 67P’s coma, the gassy envelope around the comet, had seemingly ruled out such phenomena. Initially, scientists dismissed the observed excitation of atoms as simply the effect of “day glow,” a process caused when solar photons interact with the comet’s coma.

But co-author on the study and lead scientist on one of Rosetta’s instruments studying 67P, Joel Parker, said in a statement that a closer look revealed there was something else going on.

“We were amazed to discover that the UV emissions are aurora, driven not by photons, but by electrons in the solar wind that break apart water and other molecules in the coma and have been accelerated in the comet’s nearby environment,” said Parker. “The resulting excited atoms make this distinctive light.”

A combined approach — Instead of relying on a single dataset to study emission behavior, the researchers instead worked with data from six of Rosetta’s instruments at once, including the Alice far-ultraviolet (FUV) spectrograph, the Ion and Electron Sensor (IES,) and the Visible and InfraRed Thermal Imaging Spectrometer (VIRTIS.)

“By doing this, we didn’t have to rely upon just a single dataset from one instrument,” study author and professor of planetary science at Imperial College London, Marina Galand, said in a statement.

“Instead, we could draw together a large, multi-instrument dataset to get a better picture of what was going on. This enabled us to unambiguously identify how 67P/C-G’s ultraviolet atomic emissions form, and to reveal their auroral nature.” 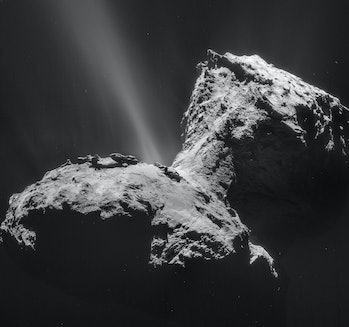 Glow up — The scientists expected to see evidence of the comet’s day glow, but their analysis showed that charged electron particles from the Sun interacting with the comet’s cool gaseous envelope resulted in auroras in the far ultraviolet.

These auroras aren’t necessarily as beautiful as those on Earth, but that may be because our eyes aren’t designed to see in the far ultraviolet. But the monumental nature of the discovery is undeniable, the researchers say — especially because comet 67P lacks a magnetic field, one of the key features we associate with auroras here on Earth.

CHASING SOLAR WIND — These curious aurorae might not be much for us to look at, but scientists say they could change how we study solar wind — and protect satellites and space probes from its radiation.

Now that scientists know these far ultraviolet auroras are (at least sometimes) related to the flow of solar wind, they can train instruments on Earth to look for their signature, detecting the presence of wind without needing another space probe. Understanding its behavior could in turn refine the defenses for new probes going out into the storm.

Abstract: Having a nucleus darker than charcoal, comets are usually detected from Earth through the emissions from their coma. The coma is an envelope of gas that forms through the sublimation of ices from the nucleus as the comet gets closer to the Sun. In the far-ultraviolet portion of the spectrum, observations of comae have revealed the presence of atomic hydrogen and oxygen emissions. When observed over large spatial scales as seen from Earth, such emissions are dominated by resonance fluorescence pumped by solar radiation. Here, we analyse atomic emissions acquired close to the cometary nucleus by the Rosetta spacecraft and reveal their auroral nature. To identify their origin, we undertake a quantitative multi-instrument analysis of these emissions by combining coincident neutral gas, electron and far-ultraviolet observations. We establish that the atomic emissions detected from Rosetta around comet 67P/Churyumov-Gerasimenko at large heliocentric distances result from the dissociative excitation of cometary molecules by accelerated solar-wind electrons (and not by electrons produced from photo-ionization of cometary molecules). Like the discrete aurorae at Earth and Mars, this cometary aurora is driven by the interaction of the solar wind with the local environment. We also highlight how the oxygen line O i at wavelength 1,356 Å could be used as a tracer of solar-wind electron variability.