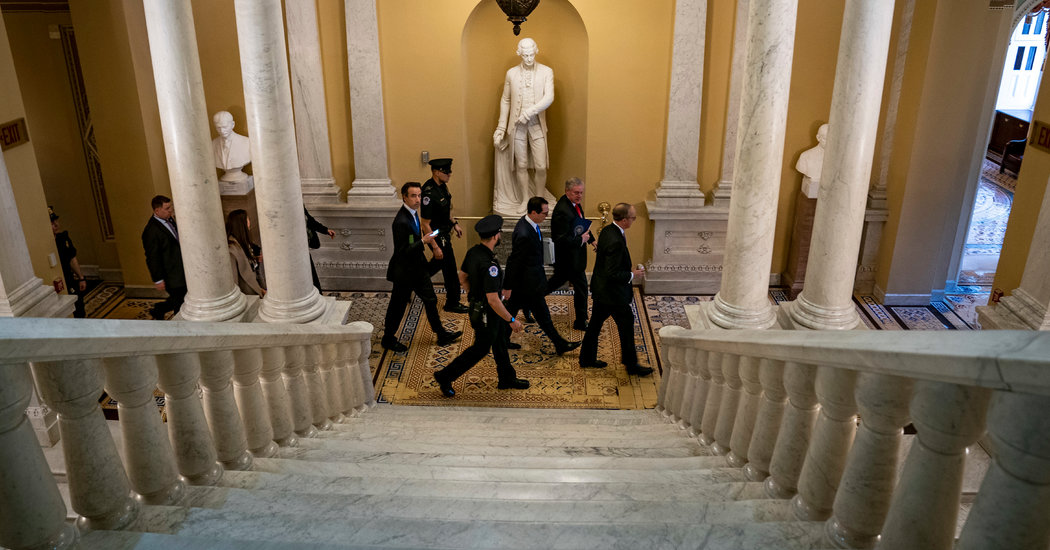 WASHINGTON — The Senate on Wednesday moved toward a vote on a sweeping, roughly $2 trillion measure to respond to the coronavirus pandemic, after Democrats and Republicans reached a deal with the Trump administration on direct payments and jobless benefits for individuals, money for states and a huge bailout fund for businesses.

The legislation, which is expected to be enacted within days, is the biggest fiscal stimulus package in modern American history, aimed at delivering support to companies forced to shut their doors, relief to Americans suffering layoffs and financial ruin, and critical aid to hospitals on the front lines of the rapidly spreading disease.

The compromise was a package whose sheer size and scope would have been unthinkable only a couple of weeks ago. It touched virtually every aspect of American life, and amounted to hundreds of billions of dollars more than Congress provides for the entire United States federal budget for a single year, outside of social safety net programs. Administration officials said they hoped that its effect on a battered economy would be exponentially greater, as much as $4 trillion.

“This is not a moment of celebration, but one of necessity,” Senator Chuck Schumer, Democrat of New York and the majority leader, said as he outlined the changes his party had secured in the legislation. “To all Americans I say, ‘Help is on the way.’”

Struck after midnight, the deal was the product of a marathon set of negotiations among Senate Republicans, Democrats and President Trump’s team that nearly fell apart as Democrats insisted on stronger worker protections and oversight over a new $500 billion fund to bail out distressed businesses. It was completed after a furious final round of haggling between Steven Mnuchin, the Treasury secretary, and Mr. Schumer after Democrats twice blocked action on the measure as they insisted on concessions.

“At last, we have a deal,” Senator Mitch McConnell, Republican of Kentucky and the majority leader, announced on the Senate floor about 1:30 a.m. “In effect, this is a wartime level of investment into our nation.”

Lawmakers and aides were still drafting portions of the bill early Wednesday morning, and were expected to reveal the full bill before a vote that would take place sometime after the Senate reconvenes at noon. Leaders anticipated lopsided bipartisan support.

On a conference call Wednesday morning, Mr. McConnell told Republican senators that the timing of a vote was unclear, but that he hoped the measure could be wrapped up Wednesday, according to a person on the call who spoke on the condition of anonymity to relate the private conversation.

Speaker Nancy Pelosi quickly endorsed the deal, but was weighing how best to pass it through the House while the chamber is not in session and its members are scattered across the country, some in places that have imposed travel restrictions and quarantines. She lined up five conference calls throughout the day to brief Democrats on its contents, and aides said a final vote to clear it for Mr. Trump was expected on Thursday.

Ms. Pelosi hoped to have unanimous support to move the bill through the House without a recorded vote, a practice usually reserved for minor, uncontroversial measures, which would not require lawmakers to vote in person. It would take only one House member to object, but leaders in both parties were counseling lawmakers to put disagreements aside and embrace a desperately needed stabilization plan.

“This bipartisan legislation takes us a long way down the road in meeting the needs of the American people,” Ms. Pelosi said in a statement Wednesday morning.

In the Senate, party leaders spent the morning trying to sell the final product to their members, many of whom have watched impatiently from the sidelines as the talks dragged on.

The resulting measure is an attempt to sustain the workers and businesses losing income as vast sections of the American economy shut down under quarantine orders, and to help the economy rebound quickly once the pandemic abates.

It includes direct support for companies large and small that have lost all or most of their customers in recent weeks, and direct payments to low- and middle-income families. The package also includes measures meant to encourage companies to keep employees on their payrolls even if their businesses have shuttered temporarily — and it increases aid to workers who are laid off anyway or have had their hours and wages cut.

The president, after lobbing insults at Democrats late Monday evening for their proposals in the final stages of negotiations, called on lawmakers to approve the deal by the end of the day.

“Congress must approve the deal, without all of the nonsense, today,” Mr. Trump said on Twitter on Tuesday. “The longer it takes, the harder it will be to start up our economy. Our workers will be hurt!”

“I’ve spoken to the president many times today,” he said, “and he’s very pleased with this legislation and the impact that this is going to have.”

The measure is the third Congress has considered this month to address the pandemic. Mr. Trump previously signed into law an $8.3 billion in emergency aid and a sweeping relief package providing paid leave, free testing and additional aid for families affected by the pandemic.

In the final measure, Republicans agreed to Democrats’ demands for a substantial expansion of jobless benefits that would extend unemployment insurance by 13 weeks and include a four-month enhancement of benefits, officials familiar with the unfinished agreement said. Democrats said it would allow workers to maintain their full salaries if forced out of work as a result of the pandemic. It would also apply to freelancers and gig workers, such as Uber drivers and others who do not have regular full- or part-time employment.

Democrats, in turn, embraced a Republican plan to provide $1,200 in direct payments for workers with incomes up to $75,000 per year before phasing out and ending altogether for those earning more than $99,000. Families would receive an additional $500 per child.

But the hardest-fought concessions were related to the $500 billion aid fund for distressed businesses, which would include $425 billion for the Federal Reserve to leverage for loans to help broad groups of distressed companies and $75 billion for industry-specific loans to airlines and other hard-hit sectors. Democrats insisted on stricter oversight, in the form of an inspector general and a five-person panel appointed by Congress, lawmakers said. Republicans also agreed to require companies that accepted money through the fund to halt any stock buybacks for as long as they were receiving government assistance, plus an additional year.

Democrats also insisted on a provision to block Trump family businesses — or those of other senior government officials — from receiving loan money under the programs, Mr. Schumer said in a letter to Democrats. But the president’s real estate empire could benefit from other parts of the bill, such as small-business loans and tax provisions.

The agreement would also deliver $100 billion to hospitals. Another $150 billion would go to state and local governments to help them weather drop-offs in tax revenue and the costs of fighting the pandemic.

Senator Patrick J. Toomey, Republican of Pennsylvania, said on Wednesday that the package also included $25 billion in grants for airlines, with taxpayers receiving “equity-type instruments.” There will also be $17 billion for national security direct loans, he said.

“Like all compromises, this bill is far from perfect,” Mr. Schumer said early Wednesday on the Senate floor. “But we believe the legislation has been improved significantly to warrant its quick consideration and passage.”

The agreement includes $350 billion that would establish lending programs for small businesses, but only for those that keep their payrolls steady through the crisis. Small businesses that pledged to keep their workers would also receive cash-flow assistance structured as federally guaranteed loans. If the employer continued to pay workers for the duration of the crisis, those loans would be forgiven.

Even as they were preparing to debate and pass the deal, lawmakers in both chambers conceded that other legislative measures would most likely be needed in the coming weeks or months to counter the consequences of the pandemic.