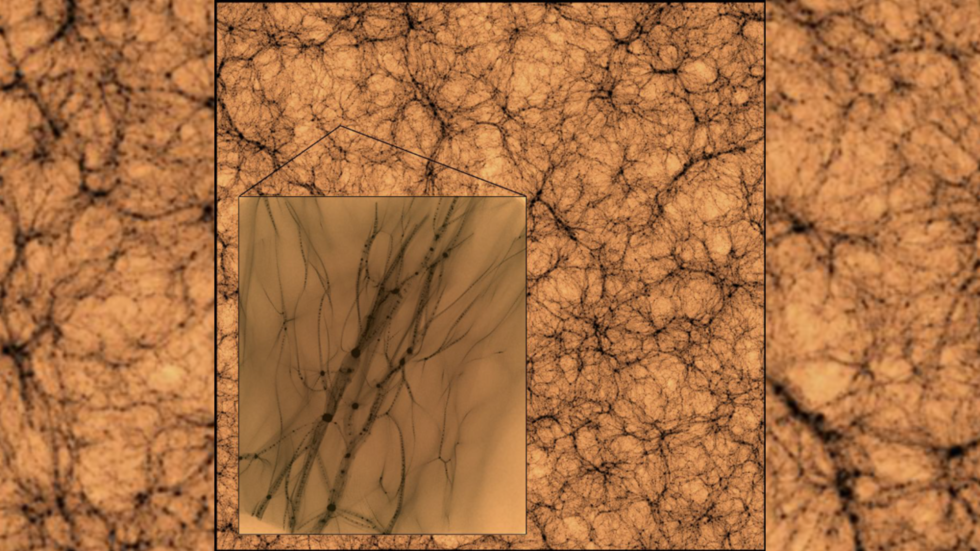 Researchers at the Harvard & Smithsonian Center for Astrophysics have run one of the most advanced simulations of dark matter ever achieved, and believe they have produced an image of the elusive, ‘invisible’ substance.

Dark matter has long baffled the scientific community, despite making up an estimated 85 percent of all the matter in the universe. It forms a central part of our most advanced theories about the universe itself, and is therefore critical to our understanding of… well, pretty much everything.

However, photographing it is impossible as it doesn’t interact with light; we can only detect it via its gravitational influence on light (we can’t see the wind but can witness it rustling leaves and tree branches, for comparison).

Also on rt.com Breakthrough in dark matter mystery as neutral hydrogen from other galaxies detected for first time

Scientists have observed dark matter’s supposed influence on a galactic scale, as it forms ‘halos’ around galaxy clusters. According to the recent simulation carried out by Harvard researchers, led by Jie Wang, these dark matter halos form at all mass scales, from galactic all the way down to planetary.

Over the course of five years research, development and testing to produce the simulation, the team assumed that dark matter has a mass roughly 100 times that of a proton and is made up of weakly interacting massive particles (WIMPs), in accordance with one of the leading theories about dark matter.

The smaller, planetary-scale halos are too small to detect via their influence on surrounding light, but they may confirm another theory about dark matter; that it emits gamma radiation when its particles collide with each other.

“These small haloes can only be studied by simulating the evolution of the universe in a large supercomputer,” said Wang.

If confirmed, this would once again blow open the mystery about the gamma ray ‘glow’ at the center of our galaxy. Indeed, dark matter is believed to form the seeds of galactic clusters by clumping together in deep space.

“This would confirm the hypothesized nature of the dark matter, which may not be entirely dark after all,” said co-author Simon White from the Max Planck Institute of Astrophysics.

“Our research sheds light on these small haloes as we seek to learn more about what dark matter is and the role it plays in the evolution of the universe.”

Scientists are constantly developing and tweaking new models to try and understand this mysterious matter, but this latest simulation may help to direct future research and offer another clue on humanity’s path to a unified theory of everything.