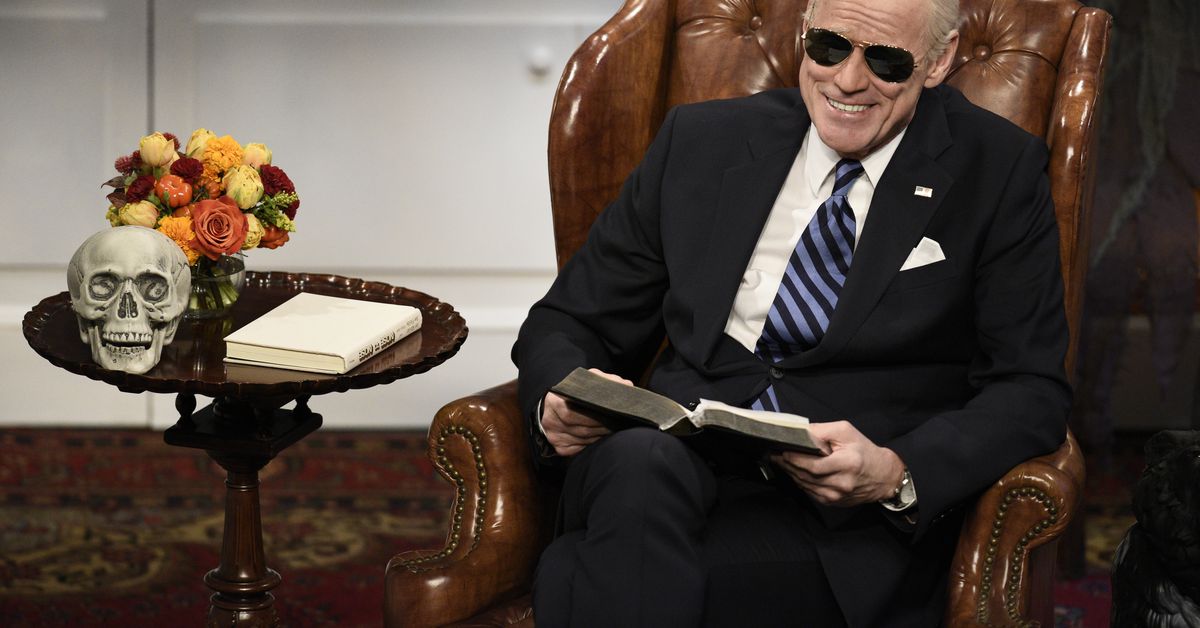 In the final Saturday Night Live cold open before Election Day, Democratic presidential nominee Joe Biden, played by Jim Carrey, sits down to read a scary story — and is haunted by a succession of visitors, including Hillary Clinton, Nate Silver, and Mitch McConnell.

After discarding a copy of Donald Trump, Jr.’s book Triggered for being “a little too scary,” Carrey turns to a classic: Edgar Allan Poe’s poem The Raven, which he updates a little for 2020.

“Once upon a midnight dreary, while Trump retweeted QAnon theories, and rifled through his adderall drawer, I was writing my acceptance speech when something stopped me with a screech,” Carrey reads. “’Twas a knock upon my chamber door! ’Twas someone still a little sore.”

That knock turns out to be Kate McKinnon’s Hillary Clinton, replete with a black cape and a raven perched on her shoulder, who warns against polling errors and raises the specter of a stolen election.

“Just like Al Gore?” McKinnon intones as thunder crashes in the distance.

Carrey, though, is unconcerned. “I can win! People know I have a plan,” he says as McKinnon swoops out of the room with a final rejoinder: “But your real advantage is, you’re not a woman, you’re a man!”

McKinnon is followed quickly by FiveThirtyEight’s Nate Silver, played by Mikey Day, who delivers his own warning to the sound of yet more thunder.

Day reminds Carrey — and viewers — that Trump has “less than a one in six chance of winning” (in reality, FiveThirtyEight’s election forecast pegs his chances at about one in 10). To demonstrate the low probability of a Trump win, Day rolls a six-sided die repeatedly — and Trump’s number keeps coming up. Finally, Day’s impromptu election simulator turns out a truly cursed result: an electoral college tie.

“That’s not even an option!” Day declares. “I’m just going to leave, because I think our country is haunted.”

Next comes two late-breaking Trump backers: Ice Cube — who in reality has claimed he only wants to work with whoever is in power, and that he doesn’t necessarily support Trump — and Lil Wayne, who has backed Trump’s plan for Black Americans. Played by Kenan Thompson and Chris Redd, respectively, the rappers tell Biden they like Trump because of the GOP’s tax policy.

“Still I will win, because I’m a baller,” a visibly shaken Carrey tells himself as he dons a pair of Biden’s trademark aviators.

Bennett displays an alarmingly reddish-purple pair of thumbs-up (harkening back to a photo of the real McConnell with badly bruised hands earlier this month) before rushing off to find his Horcrux, and the skit ends with Carrey and Rudolph addressing viewers directly.

“I’m sure it will be peaceful, no matter who has won,” Carrey says before Rudolph cuts in to point out that “it’s never a good sign when Walmart stops selling guns.” (Which it did, briefly, before reversing the decision.)

Will you help keep Vox free for all?

The United States is in the middle of one of the most consequential presidential elections of our lifetimes. It’s essential that all Americans are able to access clear, concise information on what the outcome of the election could mean for their lives, and the lives of their families and communities. That is our mission at Vox. But our distinctive brand of explanatory journalism takes resources. Even when the economy and the news advertising market recovers, your support will be a critical part of sustaining our resource-intensive work. If you have already contributed, thank you. If you haven’t, please consider helping everyone understand this presidential election: Contribute today from as little as $3.