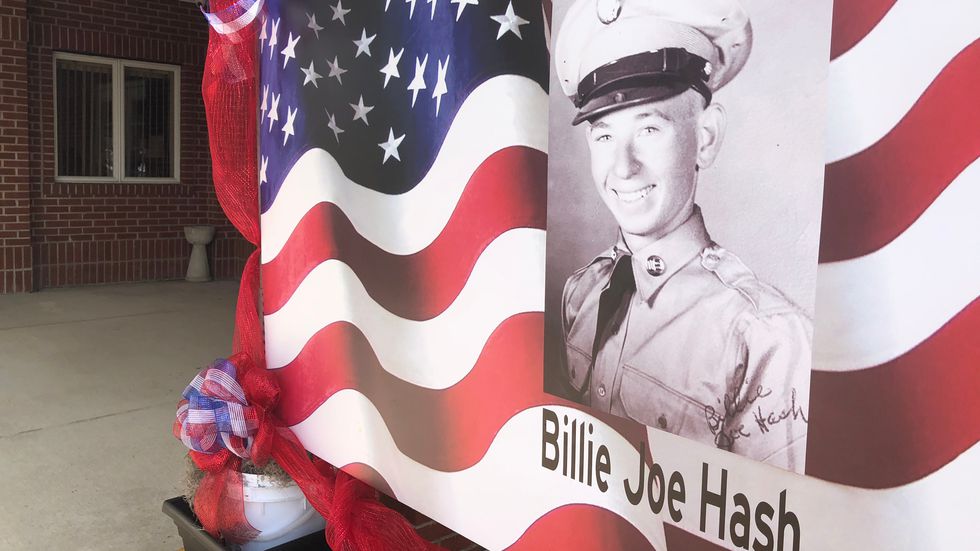 “If I could tell you all the people that have touched this casket to bring him home they would not fit in Corbin,” said Hash’s niece, Peggy Bishop.

Friday, family and friends came together for a military honor service to recognize his sacrifice to the U.S.

“The way we have talked about it as a family this is not something we are sad about. This is a celebration. This is an awesome thing he is home. This is the same as a homecoming as if a solider that went and served four years came home. That’s the way we feel about this,” said Malone.

Billie Hash, born and raised in Corbin, was just 17 years old when he joined the Army. On December 6, 1950, he was reported missing in action when his unit was attacked by enemy forces near the Chosin Reservoir, North Korea.

That battle was a two-week-long bloodbath that pitted 30,000 U.S., South Korean and British troops against 120,000 Chinese soldiers.

“There is no denying that this man is a hero that he served his last breath knowing that he was fighting for a greater cause beyond himself,” said great nephew Travis Malone.

“That was the last communication that they really got any real answer,” said Malone.

Family says Hash’s mother never gave up on him, and always said he would return

Nearly 70 years passed with no new information, but hope came in 2018. During a summit between President Trump and North Korean Leader Kim Jung-Un, Korea turned over 55 boxes containing remains of U.S. soldiers.

“We knew my grandfather had submitted DNA samples for if he was one of the ones that was returned that we would know,” said Malone.

In May, the family was notified they had identified Hash’s body and would return him home.

“We’re all thrilled that Uncle Billie is home. He’s a relative and there’s a part of you that loved him because of the stories but for our parents, this was a big deal,” said Bishop. “For all of us it’s kind of like the very last thing we can do for our parents and Granny and Pa.”

The family said during all these years, the memory of Hash was kept alive in stories.

“The Hash’s loved to tell a good story and he was the top of their list. If you would have asked any of my generation who Billie was we could tell you all about him because of our family,” said Bishop.

“They always kept him alive. He’s been alive this whole time and now it’s time to lay him to rest,” said Malone.

Hash will be buried next to his mother at Worley Cemetery in Corbin. The graveside service will be Saturday at 10 a.m.