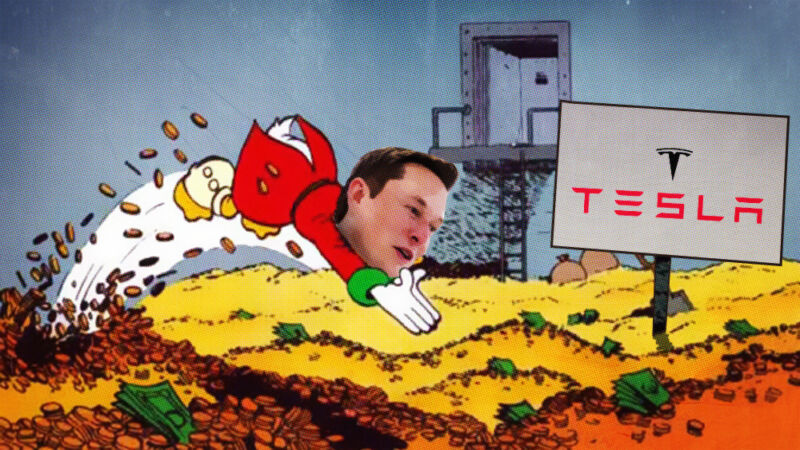 43 with 33 posters participating, including story author

Tesla will finally be added to the S&P 500 Index, the committee responsible for the index announced after markets closed on Monday. The change will take effect on December 21.

Tesla’s stock price jumped 13 percent in after-hours trading on Monday. As I write this just before noon on Tuesday, Tesla’s stock has given back some of those gains and is up about 7 percent from Monday’s close.

People have trillions of dollars in index funds that track the S&P 500 index. This means that when a stock is added to the S&P 500, fund managers have to add it to their portfolios, pushing up the stock price.

Tesla has been eligible for inclusion in the S&P index since September. The rules require a market capitalization of at least $8 billion—Tesla is above $400 billion—and that a company be profitable, on average, over the four preceding quarters. Tesla has met these criteria since announcing its fourth consecutive profitable quarter in July.

But the committee that chooses stocks for the S&P 500 snubbed Tesla in September. Its stock fell by 15 percent on the news. Then Tesla reported a fifth quarter of profits in October, and now the S&P committee is finally adding Tesla to its index.

According to CNBC, Tesla is the most valuable company ever to be newly added to the S&P 500. Most companies make the list while they are far less valuable. CNBC projects that Tesla will be one of the 10 most valuable stocks in the S&P 500.

Tesla’s stock price has surged by a factor of five over the course of 2020, making Elon Musk one of the world’s richest people. Bloomberg estimates that he is now worth more than $100 billion.